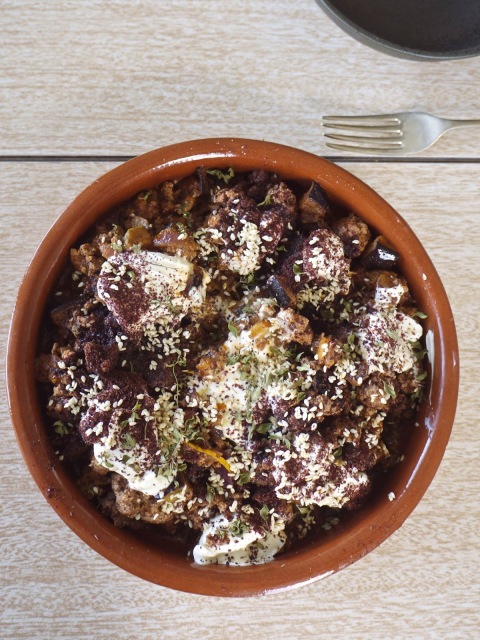 beef: got it
For a while there I was feeling some sizable angst about turning 29, partly because I was like, I’ve blatantly achieved nothing in my life and am an elderly loser (I know neither of these things are true but when you’re already prone to hyperbole it’s amazing the distance that your brain will take the existing hyperbole when you’re being down on yourself) and I also was like, I’m blatantly too old to achieve anything ever, am no longer an ingenue, am a giant snore in a trenchcoat and hat with a fake mustache on pretending to be human. (Again: the hyperbole! It really goes places, doesn’t it?)

leftover birthday cake for breakfast
And then I reminded myself that Beyonce and Nicki Minaj are 33 and 32 respectively and have released the most fire music of their careers in the last couple of years, and that I have so much ahead of me and 29 is still really young and I should just drink some water and calm down a bit because the passage of time cannot be fought so you can either age yourself horribly by worrying about it or ignore it because it’s ultimately meaningless. I mean, Beyonce’s 2013 album is honestly life-changing, to put it casually. If she can do that at 32 with all her resources and brilliance, I can achieve something productive as a tired moderately broke but talented 29 year old.

“Rosie, dear Rosie, there’s a rose in my heart for you”
So yes, I had a birthday recently, and it was honestly quite perfect. My boundlessly marvellous girlfriend cooked me a Full English Breakfast with about seventeen different kinds of protein (including black pudding – seems somewhat gothically appropriate to start one’s birthday consuming literal blood) and we sybaritically clinked glasses of whisky to go with it. I dyed my hair purple, I had a beauteous dinner and follow-up drink with my very best friends Kim and Kate, and then said girlfriend and I went to the St James theatre (above) to see the musical Singin’ In The Rain, which I swankily yet utterly serendipitously had scored free tickets to. It was just wonderful and I urge you to see it if you have even a passing interest in musicals, old movies, tap dancing, and singing in and/or rain. The costumes were spectacular, the dancing was brilliant, the singing was on point – Gene Kelly casts an unfairly long shadow but the guy playing his role was ideal – and it was just so joyful. The night finished with cocktails and fries at my work and some general reflection on how completely good my birthday had been (and on how funny it was that I had reflexively replied “Happy birthday!” several times that day when someone had said “Happy birthday” to me.)

sausages/beans/tomatoes/egg/mushrooms/black pudding/bacon/fried bread/whisky/hashtag blessed
Winding back to a couple of days before my birthday though, I made myself this Mediterranean-ish eggplant and beef dish. Since it was so simple and good I thought I might as well try to blog about it, and five million days later I’ve finally got around to it, with my usual efficiency and haste. 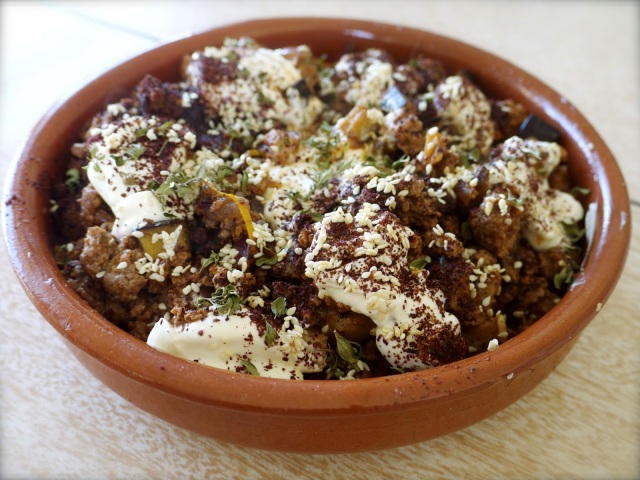 this bowl makes everything look rustic and nice, thank you bowl

It’s vaguely Mediterranean insofar as it includes some flavours of that (vast, varied, unable to be generalised and yet here I am) area, but since I just made it up based on what was in my pantry I hesitate to label it anything more specific than that. What I can confidently tell you is that it’s rich yet sharp, with spiky sour sumac and lemon zest lifting up the crisply fried, melting cubes of eggplant and tomato-y beef, with thick, creamy spoonfuls of Greek Yoghurt dropped here and there adding to that rich-sharp contrast. I love thyme so much, so that’s what I scattered over this, but oregano or mint would also be splendid in their own way. The only real change I’d make is using pine nuts instead of sesame seeds – they’re just a bit more exciting and lush – but as long as you have something nut-like there it’s all good really. If you can’t find sumac – a beautiful sour, lemony powder from sumac berries – then just add more lemon zest or simply leave it out. I mean, I love its flavour but probably the main thing you’d lose is the way it somehow ties the dish together visually and stops it looking like “beef that yoghurt got tipped on”.

fried eggplant and beef with sumac and greek yoghurt

a recipe by myself, serves two

one large eggplant
one red onion
one garlic clove
300g beef mince
half a cup tomato passata/puree
one lemon
to serve:
thick Greek yoghurt
sumac
sesame seeds
thyme leaves
Dice the eggplant, and fry in plenty of olive oil (around three tablespoons) in a large pan. Allow to get properly browned and crisp as much as possible before setting aside, and in the same pan, fry the onion, garlic and beef until everything is thoroughly browned and cooked through.

Grate the zest from the lemon, then squeeze the lemon juice into the beef along with the tomato passata and allow to come to a brisk simmer. After about five minutes return the eggplant to the pan to heat through, then transfer it to a serving dish (or serve straight from the pan), finishing with spoonfuls of Greek yoghurt spooned over at random, a generous blanket of sumac (she says, not having intended to put that much on but got a shaky hand, so we’re going with it) a scattering of dried thyme and toasted sesame seeds. I also add plenty of salt. Because I love salt.

The yoghurt I use is Zany Zeus which is so thick, thicker than sour cream – if all you have is runny, slightly chalky stuff then I would not personally go putting it on this, but you do you. I do maintain though, that it’s the intensely thick, satiny texture of the yoghurt which makes this. I really haven’t cooked meat in forever but in the last two weeks I made ribs (for my girlfriend’s birthday, which also fell in April) and now this. I can go weeks without eating meat, even though I do love it, but I’m glad I dazedly purchased this mince in an overtired haze and then even gladder that I worked out something so completely delightful to make with it. If you want to though, you could just double or triple the eggplant and leave out the beef, since the vegetable’s buttery softness and golden brown crispness after being vigorously fried is entirely enough joy for your tastebuds on its own. 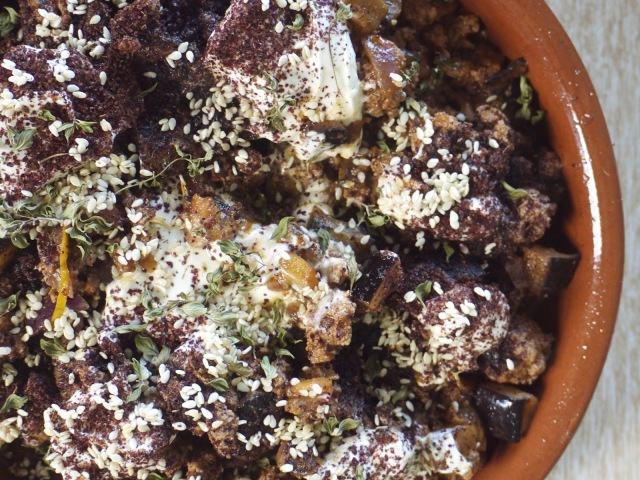 My birthday didn’t stop when the clock struck midnight on the 17th though, as my flatmate and dear friend Charlotte and I had a joint birthday party the following night. (Her birthday is a week or so before mine.) There was dancing and punch and disco lights and a noise control notification (less fun! Unimpressed tbh! But uh, it happened) and cake and candy and a little tequila and so many good people and very importantly: I had an incredible yellow shaggy fluffy cardigan.