rum’n’raisin your hands in the the air like you just don’t care
I’ve been really sick this whole past week, and every time I even tried to blog it was like, what if I just lie here and groan throatily instead? Yes, that’s a better use of my time. I’m still a little tickly of the throat and having to blow my nose a ton, but things are definitely improved. I pushed myself a couple of times last week – to go to work (alas, no sexy 2005 Lindsay Lohan voice for me but more of an enthusiastic honking goose noise every time I opened my mouth) and to go to the launch party of the Visa Wellington on a Plate festival. I really could’ve stayed in bed that night of course, but the promise of free wine is a rousing one and reading the new event programme is always exciting and damned if I’m going to let feeling like death stop me from doing some hard mingling and trying to feel like I’m vaguely relevant in the food-related scene, whatever that even is. Upon arriving at the launch my sheer black fringed robe immediately got tangled in a low-hanging plant in the foyer, causing an old man to say in a concerned voice, “This is the Wellington on a Plate launch“, as though I’d wandered here by mistake while looking for like, The Quarterly Symposium of Sewer Dwellers, but fortunately my name was in fact on the door and I managed to extricate myself and have a wonderful time. Love a good launch party! And now I have till August to meander through the programme and hedge my bets as to which set menu in which fancy restaurant looks the funnest.
What with my throat feeling like an actual garbage can and all, I thought the ice cream I made a while ago would be a soothing thing to eat, but unfortunately my stupid nose, with all the functionality of a flickering lightbulb, meant that I couldn’t really taste anything. This was distressing. Since this ice cream is honestly the most delicious thing ever. Luckily, I made some well before I got sick, ate the lot in one sitting, then made some more and ate half of that before I got sick, so I have a good frame of reference from which to describe it to you. And I will describe it to you like this: omg it’s amazing.

I don’t even like raisins at all, those gritty little scrunched up no-fun ex-grapes, but my swell girlfriend was saying how she loved rum’n’raisin ice cream when she lived in England and never saw it anywhere here in New Zealand. I like a challenge, even if I don’t like a raisin, and I adore making ice cream, and actually had never even tried this particular flavour before, so how was I to know if the look on my face I made when I thought about it even matched how it tastes in real life?

I cheated massively and substituted the more tolerable sultanas while audaciously keeping the name, but if you’re not averse to the real alliterative thing then by all means substitute raisins for my substituted sultanas. Really though, it’s the rum and the coconut sugar which make this recipe particularly magical – I used Cruzan Blackstrap rum which is full of dark, sticky caramel flavour, and anything along those lines would be perfect. I feel like I’ve gone on heaps about coconut sugar lately, but it’s so fudgily butterscotchily good and really gives the custard an intensely, gorgeously mellow flavour (yes, both intense and mellow). Making the custard is a pain – so much transferring between bowls and pans and so much stirring! – but it’s forever since I’ve done this proper method of making ice cream and the soft, dissolvingly creamy texture you get once it’s frozen is worth the effort, I think.

And yes, the sultanas themselves are wonderful – all swollen from the rum, and strangely chewy and confection-like once frozen, little bursts of alcoholic warmth amongst all the caramel iciness.

look at this good ice cream I made
rum’n’raisin ice cream
makes around a litre/1200ml, depending on how much custard and mixture you eat.
a recipe by myself. I didn’t consult any other recipes so this is literally ice cream that has rum and also raisins in it (I mean, sultanas, but same diff) and I have no idea how similar it is to the established flavour itself, but since I never see it around and have never tried anything but mine I can only conclude that my version is totally superior to everything.
3 large egg yolks
half a cup coconut sugar, or brown sugar
one cup full cream milk
500 – 600ml cream (sometimes it’s only sold in 600ml bottles and if that’s all you can find all that happens is you’ll get a bit more ice cream, wheeeee)
half a cup of sultanas, golden if you can find them
dark rum, I used Cruzan Blackstrap
Firstly, place the sultanas in a small bowl and pour in just enough rum to pretty much submerge them. Leave them overnight ideally to absorb as much alcohol as possible, but if you’ve only got an hour then I’m sure it’ll still be okay.
Slowly heat the milk in a saucepan, till it’s almost, almost, at a simmer – you want it to be hot but barely starting to wobble and move around with the heat, if that makes sense? While it’s heating up, mix the egg yolks together with the sugar – it might turn into quite a thick paste, don’t worry – and then once the milk is hot, remove it from the heat and briskly whisk a few spoonfuls of it into the egg yolks, slowly adding the rest of the hot milk while continuing to whisk. Now spatula all that back into the saucepan and stir this mixture over a low heat – either using a whisk or a spatula – until it thickens up a little, like the texture of a good milkshake. This will take a few minutes of stirring but keeping the heat low prevents the egg yolks from cooking instantly. Once you feel like it’s sufficiently thick – less a milky texture and more a creamy, saucy texture – remove from the heat immediately.
Now all the hard stuff is done, and to turn this into ice cream, all you have to do is: stir the sultanas and remaining rum into the cooled custard, whip the cream until it’s thick and aerated but not fluffy and stiff, fold everything together, spatula into a freezer-safe container and freeze, without stirring, until it’s solid. That’s it.

Also, the person who suggested that I try making this in the first place really loved it, which is excellent. There are so many things I’m not good at, but it’s nice to remind myself how amazingly great I am at making ice cream. I mean, I really did eat the entire first batch in one sitting, as if in some kind of delicious fugue state. And so I conclude that raisins are in fact pretty okay, but only if they’re actually sultanas. And filled with rum. 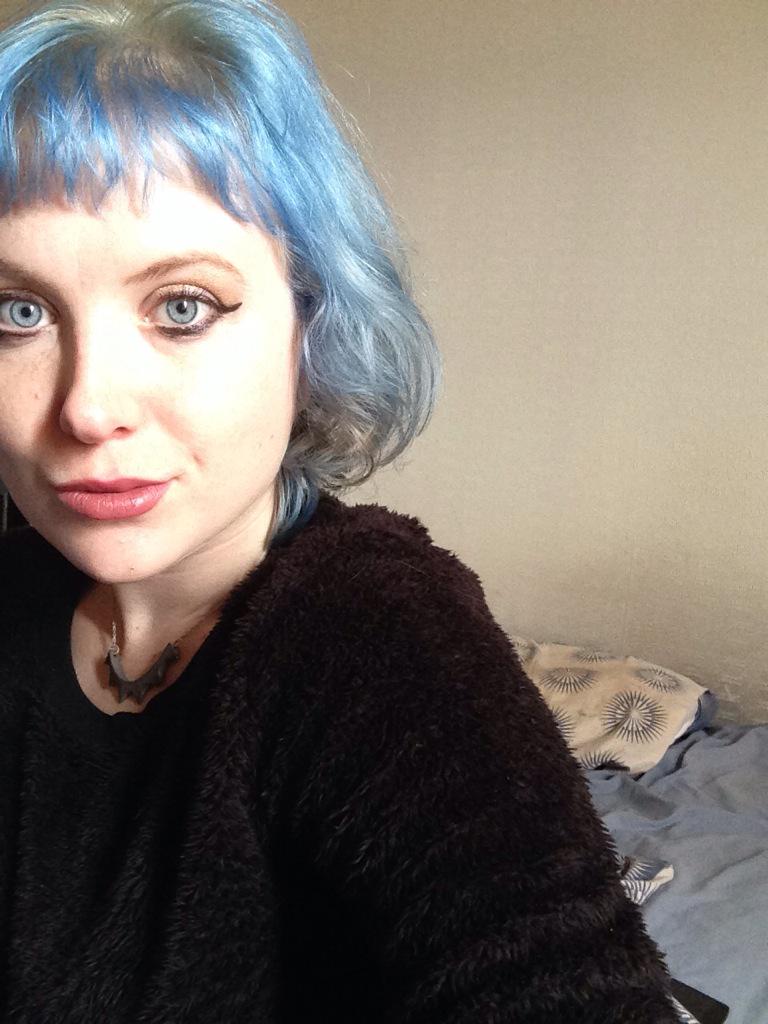 Also: ya girl has blue hair now! Although as I type I’ve randomly smudged some purple and pink into it to see what happens. What will probably happen is I’ll forget I’ve done this and take a nap after I’ve finished writing this and I’ll end up dying my face and pillow but somehow not my hair. But I want to nap so hard right now I’m not sure I even care? Either way, fun times should ensue.

Some other exciting things I’ve done lately include, appearing on Radio New Zealand to talk about preserved lemons with Jesse Mulligan – I love being on Radio NZ, they are good people – and also I wrote about a local coffee shop for US site Sprudge. Ya girl is doing stuff! Also ya girl is so ready to be completely unsick again. There’s only so many times that I can Leslie Knope myself into action, being all “okay I can’t actually stand upright okay time to go interact with the public and do the responsibilities” (by “only so many times” I mean “I will do this endlessly and as many times as I have to”, but yeah.) On the upside, being sick and having my tastebuds wavering in and out of service means I still have quite a lot of untouched rum’n’raisin ice cream left in the freezer…