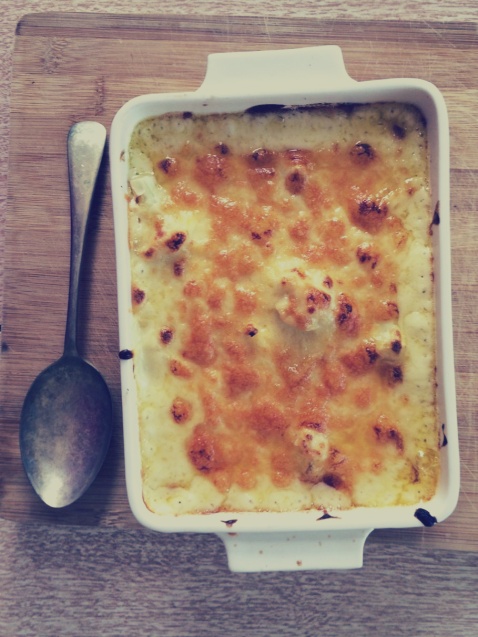 I adore my job as a bartender (indeed, a “prestigious bartender” as my former flatmate’s TradeMe ad for her room charmingly described it) – making drinks is the funnest, I like the nonstop stream of strangers to talk to, the team is wonderful, I’m always awake all night anyway, and honestly I dig the attention – being behind the bar is kind of like being on stage. And I love being on stage. However. I really miss making dinner for myself. Scrounging through the pantry, making something out of nothing, bashing flavours and textures together, making pasta or pancakes or slow-cooked-chickpea-bla-bla-bla or some kind of elaborate salad or whatever. And then either a voice in my head or a human nearby (I forget which) was like, “what about lunch”. I mean, easier said than done; I’ll usually wake up brutally early but not see fit to exit the bed until well after noon. But as it looks like lunchtime is my only chance to make myself dinner these days, I’m willing to throw some energy into it at least once or twice a week. (The rest of the time I’m fervently rewatching The OC like some kind of hypnotised baby seal until I dazedly realise that it’s time for me to go to work and/or generally not be sedentary.) 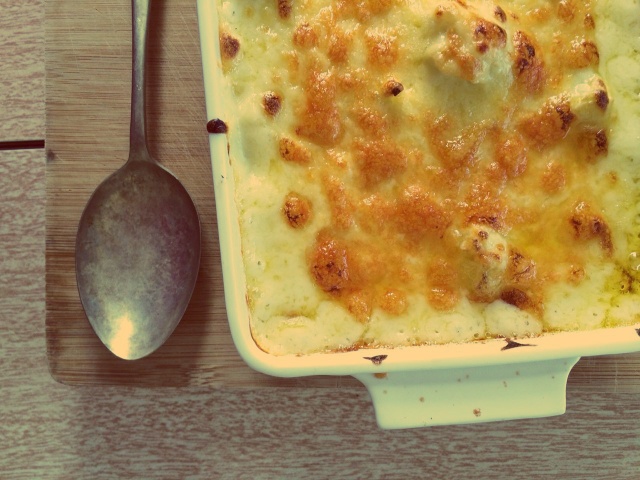 This week I managed to get my act together and make myself a thoroughly fantastic lunch of wasabi cauliflower cheese, the sort of thing that’s usually a side dish but is very fun to eat as a meal in its entirety. In an unprecedented fit of activity, I also bleached my hair at the same time. In an even more unprecedented fit of competency, I somehow managed to not eat poison while lovingly massaging wasabi into my scalp. Everything was in its right place: not least, a small vat of cauliflower cheese inside my face.

This recipe was inspired by Katrina Meynink‘s excellent wasabi mac and cheese, and is a wondrous mix of blanketingly comforting and throat-punchingly zingy. The horseradish heat of the wasabi gets you right in the back of the nose while your lungs fill with the gloriously mellow, thick cheese sauce. The cauliflower, roasted and browned, is nuttily mild enough to carry both these elements with ease. Truth be told you could probably put melted cheese on a tree stump and it would taste good, but it’s amazing how the simple act of browning said cheese under the grill elevates this simple dish into heights so good that I’ve run out of adjectives with which to describe it all. Seriously, this is one hyperbolic paragraph. Luckily for you, what sounds like hyperbole on most people is me just being calmly sincere. You don’t even want to know what it’s like when I hulk out and actually employ hyperbole.

a recipe by myself; serves one-ish. Two at best. If you can’t figure out how to increase it to feed more people though, then I ruefully cannot help you.

half a head of cauliflower
40g butter
two heaped tablespoons flour
milk, around 250ml give or take
a heaped teaspoon of wasabi paste
grated cheese, around two handfuls

Set your oven to 220 C/450 F. Slice the cauliflower into florets, and then for good measure, you might as well slice up any remaining stalks and stems since it’s all still cauliflower. Throw it all into a small oven dish which will hold the lot snugly, and then put it in the oven to roast for around 20 minutes while you make the sauce.

Stir the butter and flour together in a smallish pan over a medium heat, till the butter melts into the flour and forms a thick paste. Stir this for a bit longer, then tip in around 1/4 cup of milk, continuing to stir – this first measure will most likely hiss as it hits the hot pan and be absorbed fairly instantly into the flour-butter. Continue slowly adding milk and stirring till you have something that looks like sauce – the amount of milk may vary, but you want to end up with enough to comfortably coat the roasted cauliflower while still being quite thick. Throw in a handful of cheese and the wasabi paste and stir until the cheese has melted into it and the wasabi is thoroughly incorporated. Taste to see if it needs more of anything – some salt, more wasabi, a little more milk, whatever.

Remove the cauliflower from the oven, spatula the cheese sauce evenly over it, allowing it to sink into the crevices between each floret. Sprinkle over another handful of cheese, and put it back into the oven for another five minutes – at this point you can turn the oven onto grill to brown the cheese on top, although keep an eye on it so it doesn’t burn. Eat.

Obviously I’ve ranted at length about how good this is already, but just know that I intended to eat half of this and retain the leftovers for the following day; instead I went into a kind of fugue state and galloped through the lot in one sitting, sinuses stinging from the wasabi and eyes damp with the particular joy that melted cheese bestows.

Spring has sprung and it’s filling me with this weird sense of optimism – I do love a good solid wallow in icy wintery weather but damn it if the sunshine doesn’t manipulate me into feeling beatifically happy. Nevertheless it has been dark and cold for so long that I’ve forgotten what one even does in nice weather, and I have been spending (some might say squandering) almost all of the sunshiny hours on watching The OC and sighing over how truly good Sandy Cohen is and how literally perfect the character of Summer is, while knitting my way through an enormous Lenny Kravitz-inspired scarf. Thank goodness Sandy Cohen’s constant prattling on about bagels left me with such an enormous craving for them that I had to leave the house in search of them eventually, thus not entirely missing the beautiful blue-skied weather: thanks, TV!
______________________________________________________________
title from: The Way I Are, Timbaland and Keri Hilson’s banger from 2007 that I once danced so hard to that I fell onto a bed, bounced off it onto a dresser, and broke my fall with my incisor tooth. Was miraculously fine though: ain’t nothing gonna break my stride or my teeth.
______________________________________________________________
music lately:
be your own PET, Damn Damn Leash. Their entire self-titled album is bratty gold, the kind of music that makes you want to go kick a letterbox or something, but this early track was the first of theirs that I ever heard and I was instantly hellaciously smitten.
Faith No More, Epic. Ugh I can’t quit this song. It’s also gloriously bratty and I love how Mike Patton sounds kinda congested and it makes me wanna dance SO hard.
My Bloody Valentine, the Loveless album. It’s the kind of thing you have to put headphones on and lie on the floor to listen to but gosh damn it’s lush and crunchy and dreamy and all good things. It really suits being listened to all at once but I guess if you want an entry point, When You Sleep or I Only Said are wonderful.
______________________________________________________________
next time: if Sandy Cohen has his way, it will be some kind of bagel stuffed with bagels served upon a bed of bagels.