the kale gaze
How do I know I’m getting old? I’m delighted that I get asked for ID when buying alcohol, instead of being righteously indignant, and you can barely make eye contact with me without me leaning in conspiratorially and saying “this year has gone so fast, hasn’t it!” Luckily I have immaturity of spirit and a confusingly youthful face on my side should things get all too ancient up in here (people tend to think I’m 21 or 22, I am in fact staring down the barrel of thirty entire years old.) And how do I know it’s nearly a new year? Because the talk of how fast the year has gone increases alarmingly, and one’s thoughts turn to things like self-improvement and goals and horrifically hi-def introspection. 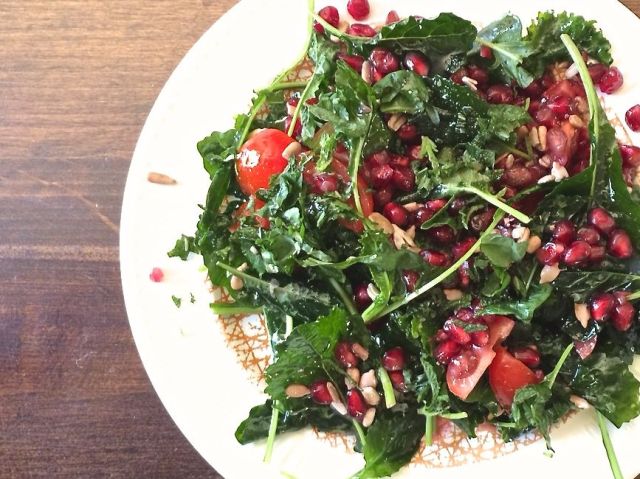 2015 has been a year of surprises and changes; of staying broke, of things not going how I wanted them and things going better than I ever thought possible in ways that I still have and in ways that are now gone to me. But I have managed to finish it sleeping well for pretty much the first time, in the best job I’ve ever had, and somehow closer than ever with my two best friends Kim and Kate.
The next year though, is going to be the year of the following for me – just a few low-key easily achieved resolutions, because I love to make things easy for myself, don’t I:
So it should surprise no-one, with this in mind, that my head start on the goals comes in the form of eating some kale. Which itself comes in the form of this very pretty salad.
I read about massaging kale in the Little Bird Unbakery raw vegan cookbook, which is where you put sea salt and a olive oil on your leaves and give them a good rub to soften them somewhat, I’m guessing because they absorb the oil as the salt draws out the moisture. Kale is combatively healthy and does have a fantastic flavour but tends towards a kind of off-puttingly hostile toughness of leaf; doing this process – despite making me feel like I should’ve asked my salad “was that good for you?” – does in fact help make everything more delicious and approachable. And it’s not like you have to make eye contact with it, or indeed anyone, while you’re doing it.
And then, in case you’re all, “just one noted superfood in this recipe? Why don’t I just go eat literal garbage?” I’ve also included pomegranate seeds. These beautiful red jewels look incredible against the green leaves, and they provide a sourness that both melds with and uplifts the potential heaviness of the oil and salt. They’re also crunchy! Which is fun!

not entirely convinced that pomegranate is real. What are thoooooose.

Quantities in the recipe are vague as, since this is summer (or at least, it is in New Zealand, where I am) and I don’t want your brain to overheat, and also because you can increase or decrease things depending on your needs. While this would be delightful with some avocado, fried halloumi or crumbled feta added, as a complete salad on its own it’s very excellent. I ate the lot for a late lunch yesterday (I know it’s just salad but it was soooo hot outside and I could only face food that was 90% water) and upon consuming it I could practically feel my red blood cells smiling beatifically as they scooted around my in my veins.

two or three handfuls of baby kale leaves
seeds from half a pomegranate (or a whole one! live your truth)
five or six cherry tomatoes, halved or quartered
quarter of a cup sunflower seeds or small nuttish thing of your choice
extra virgin olive oil
sea salt
mint leaves
basil leaves
a tiny pinch of cinnamon

Put the kale leaves into a good-sized bowl, sprinkle over a pinch of sea salt and drizzle over a generous quantity of olive oil (but okay, about a tablespoon or so) and massage the leaves, like, just do it, all you have to do is rub them between your fingers and thumbs till they soften a little and change to a darker green. When you can no longer deal with this, stir in the pomegranate seeds, sunflower seeds, tomatoes, cinnamon, and as many mint and basil leaves, roughly chopped, as you like.

Give it a taste and if you think it needs more olive oil and more sea salt then go hard. I feel like there’s not a salad in the land that doesn’t benefit from being oilier and saltier.

I had a distinctly wonderful Christmas, spent largely with rad work people eating lush barbecue food and brining myself in generous quantities of Real Champagne. The weather was searingly hot and yet I managed to not really get sunburned, and both Santa and family members charmingly got some parcels sent to me in time so I had presents to open on the day. I’m also looking after a friend’s adorable cat which means waking up to a curled up wee ball of fluff beside me every morning! It’s all I’ve ever wanted! He’s also fearsomely bloodlusty though, which made Christmas Eve a little interesting. The cat seemed to want to recreate the Gifts of the Magi story for me, presenting first an enormous dead rat, and then the world’s vastest cockroach. I was like, what’s next? Frankincense? Me? Is it me? But luckily a Christmas miracle occurred and the third gift was the gift of no more corpses. 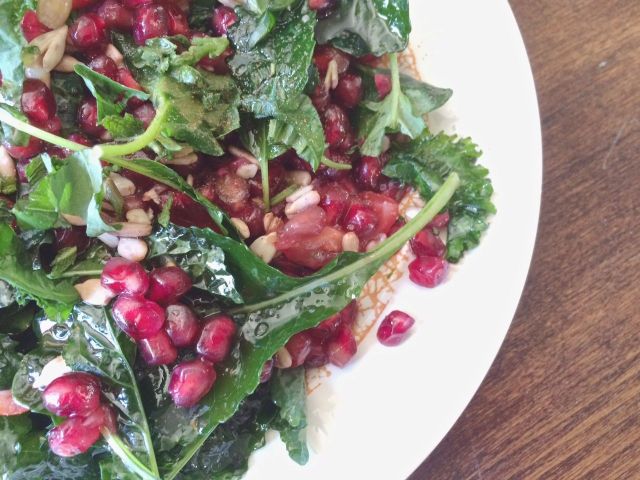 Say Anything, I Want To Know Your Plans. This band which has been around forever has been one of this year’s very very best discoveries for me.

Dark Dark Dark, Patsy Cline the lyrics to this are so sad that you should put a helmet on your heart before listening. Like, do yourself a favour and don’t listen to it. (But do! But don’t.)

One thought on “but i tell ya, it’s gonna be a champagne year”