Much as I have respect for juice that is usually followed by the word “cleanse” and involves several pulverised green vegetables bringing joy to your liver, my preferred kind of juice is the sort that comes in rainbow colours, is preferably imported from somewhere exotic like America, and is found in the fridge in the dark back corner of the dairy down the road. Golden Pash is my absolute favourite, a passionfruit-tinged fizzy beverage in a purple can with hangover-healing properties in every carbonated bubble. I believe it’s manufactured in New Zealand but there’s something about its rather desperate insistence that it contains a whole 5% fruit juice that is kind of charming. Like, mate, my shampoo probably has five percent fruit juice in it. My shoes are probably five percent fruit juice (I’m a bartender, so this is actually possible, as opposed to hyperbole for hyperbole’s sake alone.) I’m ride-or-die for Golden Pash…but I am also easily swayed by pretty packaging and the promise of exciting flavours.

example: the results of a very casual trip to the dairy

Anyway, after a recipe misfire where I thought I was making gummy-type candy out of Peach Snapple but instead ended up simply making delicious jelly, I thought: jelly! Fun! And so set about to make jelly on purpose out of the next juicy beverage which took my fancy. And that happened to be Arizona Iced Tea, pomegranate flavour. 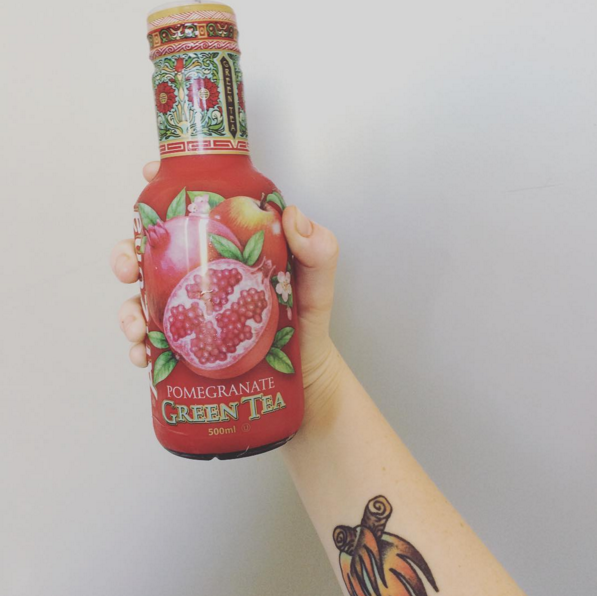 one of two ingredients

Some might ask, why make your own jelly? But like, why do anything, really? In its favour, this is cute and really easy and perfect if you need to take a dessert to some kind of potluck situation or provide something for your friends – either go childs-birthday-party-esque and make a big bowl of it to be scooped up and served with ice cream, or pour it into dinky glasses and ramekins for individual servings. Oh, and it’s completely delicious – the surprisingly delicate flavour of the pomegranate, all fresh and gently astringent, tastes wonderful when suspended in gelatine. It’s refreshing, it’s barely sweet but just sweet enough, it’s gloriously wobbly when you smack it with the back of your spoon for no good reason other than to bring about your own good cheer; and if you hold it up to the light it glows gloriously red and pink like some kind of magical crystal, the sort of thing that Captain Planet would have as a household knick-knack, like a sunset’s reflection caught in water.

And there’s only two ingredients! One is simple: some kind of juice; you obviously do not need to use Arizona iced tea or even pomegranate flavoured iced tea or EVEN iced tea, I mean if you want to be truly unkind to yourself you could literally use plain water, this would not be a good time at all, but the gelatine won’t know the difference. However as I’ve outlined above, pomegranate flavour makes for a delightful jelly. The other ingredient is gelatine: mysterious, unfortunately-non-vegetarian, gelatine.

I used leaf gelatine which is pretty easy to get hold of in supermarkets and very easy to use – just let the sheets of gelatine soak in water, give them a squeeze, and then stir them into hot liquid and that’s literally it. However, if all you can find is powdered gelatine, I mean, that will be a perfectly fine substitute, and google should be able to help you with converting quantities.

one 500ml bottle of arizona pomegranate flavour iced green tea; or whatever you like
4 sheets of gold-level leaf gelatine (I use Equagold)

Soak the gelatine sheets in a bowl of cold water till they soften, then pick them up and give them a squeeze – this bit is delightful, not gonna lie – and tip out the water. Put the softened gelatine leaves back in the bowl and pour over about a third of a cup of recently boiled water from the kettle – just enough to cover the gelatine leaves – and stir till they’ve dissolved, which should only take a few seconds. You don’t need the entire bottle of tea, so you might as well have a sip or two first before pouring it slowly into the gelatine/hot water, stirring as you go. From here, simply pour it into cute serving bowls or one larger dish and leave in the fridge for a couple of hours to set. 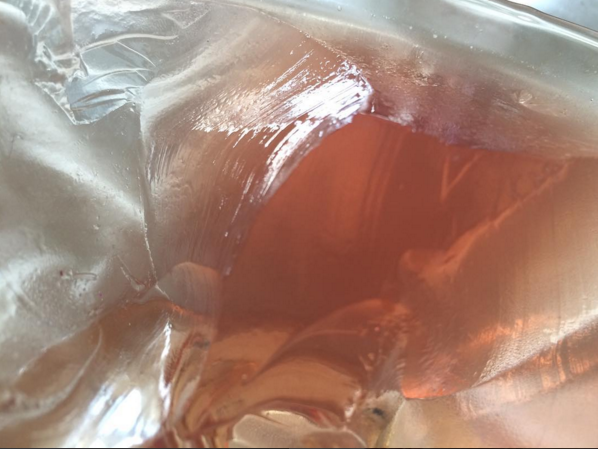 pomegranate jelly or a still from the sinister film Picnic at Hanging Rock?

Bonus: apparently gelatine helps put a shine on your coat and make your nails strong, so I look forward to being intimidatingly sleek and glossy any day now.

The Pharcyde, Drop. Made even better by its hypnotic backwards-forwards music video.