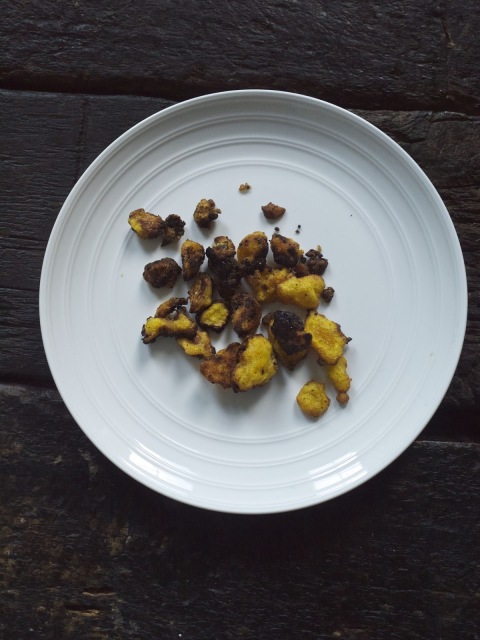 a pile of battered, fried garlic cloves
I started this blog nine years ago and – five thousand percent understatement – it was a very different landscape. No Pinterest, no Instagram, the barest hint of twitter and facebook, all that obvious stuff. However, comments were everything. Everything! I used to be all like “oh nooo this blog post only has thirty/fourteen/ten etc comments on it, what can I do?” And mate, you could absolutely tell when bloggers didn’t care a wit about you and were just trying to get clicks through to their own page, because you’d write a long post about how your only goldfish, who had also raised you like a parent through childhood and worked so hard to put you through medical school, had just died, and they’d be all “great post! Looks delicious! Check out my chocolate malteaser cupcakes photographed sterilely against a baby blue background!” It was 2007, okay. We’d just discovered cupcakes and polka dots. Bacon was as yet a distant fever dream. We commented, it was what we had.
These days, I don’t need blog comments to know people are reading – I get most of my feedback on Twitter and Instagram and occasionally Facebook and sometimes by holding my palms towards the sunset and closing my eyes intently and whispering my URL backwards three times. The comments I do get are usually something nice from a dear friend or a generally lovely message from a reader. The lack of volume means I really pay attention to them whenever they happen.
And last week I received a comment that really got to me. Before I go any further, I hear what you’re saying – be the bigger person! Be a literal grown up! Ignore it and move on! Well you don’t need to worry, I did that. For five days. And now having got that out of the way, I’m allowing myself a brief foray into being petty.

Dear Anonymous:
I do have life happenings that have distracted me from this blog. It’s called a job. It’s called duh. I work around a billion hours and have a hilariously big rent and bills to pay, as do many people. To my great disgust I have to sleep at some point of each day so that doesn’t leave me a lot of time or energy to buy food and cook for myself and photograph it and then write thoughtfully about it. And yet still I manage to get a blog post out every week. Because this blog means so much to me. You think I’m better than scone dough pizza? Do you know how delicious that pizza was? Do you know how exhausted and unhappy I was when I made it because I’d slept through my entire day off and hadn’t blogged yet and felt worthless because I tie my up my value in the work I do for some reason and how pleased I was that I managed to accomplish that one small thing? Do you know how much I think about this blog and worry about what I’m achieving with it? Did you read the bit where the recipe was adapted from one I wrote for my literal published cookbook? Which should thus validate it somewhat for you? Did you read the bit where my goldfish toiled day and night to put me through medical school? Did you appreciate me trying to lighten the mood a bit here?
Anyway, my main question for you, Anonymous, is: when are you going to get your act together? By giving me money? If you give me money then I’ll be able to have more time to cook and write for this blog and pitch writing to other sites and finally redesign the hilariously outdated yet hopefully loveable look of this thing. I don’t know who you are and thanks for saying that I have a lovely way with words. But ya hurt my damn feelings, Anonymous. I try really, really, really hard here, okay. That’s all. If you’re that worried about my priorities then maybe you should prioritise funding my life so I can write the blog you want from me. This is all I’ve got right now. 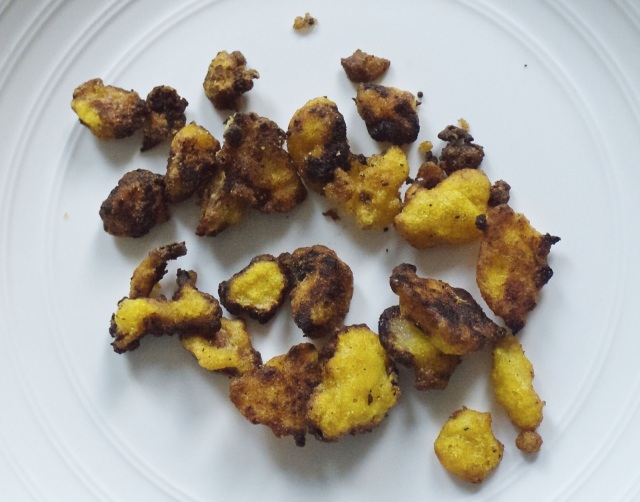 Wow, awkward! Now that I’ve done railing misguidedly against late capitalism, let me caveat that (a) I adore my job and have never been happier than I am now in a position of employment except I wish I had more money but so does everyone so that’s not a controversial stance, (b) I’M SO SICK right now with some kind of queasy-making, energy-sapping coughing-fit head cold so while I’m totally accountable for my actions, I’m not like, that accountable.

Which is why I ate two whole bulbs of garlic yesterday for lunch. That may sound like a lot, even by a garlic lover’s standard! But once you’ve individually battered and deep fried each clove, it suddenly becomes the most insurmountable task and you’re all, why didn’t I do this with five bulbs of garlic. I guess it’s the same as potato crisps: if you said “I just ate forty slices of potato” you might raise some eyebrows but if you said “I just hooned a can of Pringles, salt and vinegar flavour” you’ll receive nothing but envious sighs and sage nods of understanding. 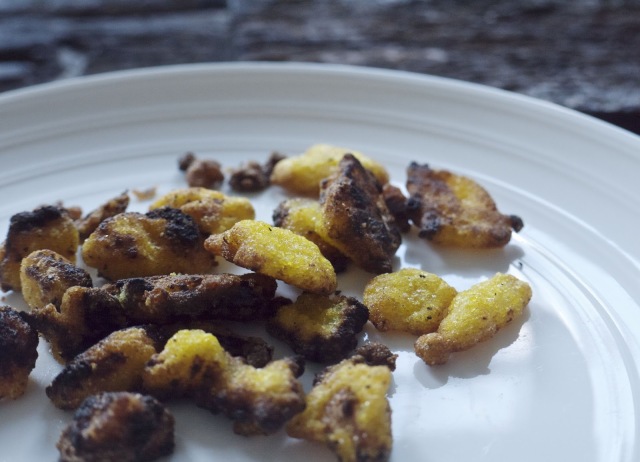 It’s hard to explain exactly but I’m always trying to undo layers when when I think up recipes: with this one I didn’t have the appetite for a big meal and simply wanted a ton of garlic, rather than having to eat something else that had been annointed with garlic, if that makes sense. What if I fried the garlic cloves themselves so they became crunchy little morsels, like fries? This proved to be surprisingly easy. And monumentally delicious. A quick simmer in water to soften the garlic and remove its harsh, burning edge, a very quickly made batter, and a quick fry in a little oil. That’s it! And in a charming piece of serendipity, the leftover batter itself, when fried, makes delicious little garlic-tinted pancakes, so you don’t have to waste anything if you don’t want.

But the garlic is the star: bite through the hot, crisp exterior and the centre is pure, soft, sweet dissolving garlic. You could argue that they’re kind of pointless (you could do a number of things) but you could increase the number of bulbs and make a bowlful as a Netflix-and-chill type snack or scatter them through a salad or pasta or combine them with some other small fried thing like halloumi, or indeed, just use them to ward off your own sickness. I’m not going to lie: I totally drank the water that the bulbs had simmered in, in the vain hope of gaining every last bit of garlicky goodness. It was honestly delicious in a broth-y type way and there’s no reason you can’t save it for a risotto or soup or similar. The turmeric isn’t exactly crucial but it gives a gorgeous golden colour and is also full of cold-fighting skills so you might as well include it, yeah?

a recipe by myself.

Place the whole garlic bulbs in a good-sized saucepan and cover, just, with water. Bring to the boil, and place a lid on top slightly askew so you let out some steam. Let them briskly simmer away for about ten minutes or until a knife stabbed at them suggests they’re pretty soft. Remove from the water and put them in a sieve under cold running water for a bit so they’re cool enough to handle. Slice the base off – it should come off fairly easily.

In a bowl, mix together the tapioca flour, cornmeal, turmeric, salt, pepper, and water, to form a thickish batter. Add a little more water or a little more cornmeal if it needs thinning or thickening.

Heat about a centimetre of oil in a wide pan over a high heat. Gently coax the garlic cloves out of their casings – this shouldn’t be too hard although allow for the occasional delicious casualty – and drop them in the batter. Once coated, drop them in the oil and allow them to fry for roughly a minute each side or until golden brown and crisp. Repeat with the remaining garlic. If some cloves bust into pieces while you’re trying to extract them from their casings just throw them in the batter and fry them anyway, it’s all good. Remove the fried cloves to a paper towel or similar till you’ve done all of them, then, if you wish, fry spoonfuls of the remaining batter until crisp and dark golden. EAT THE LOT. 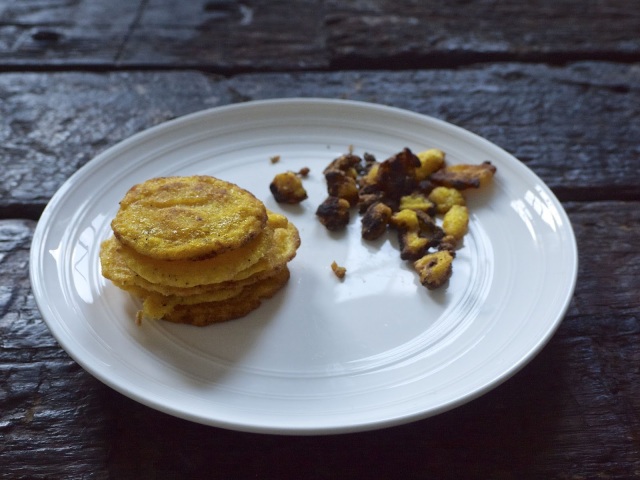 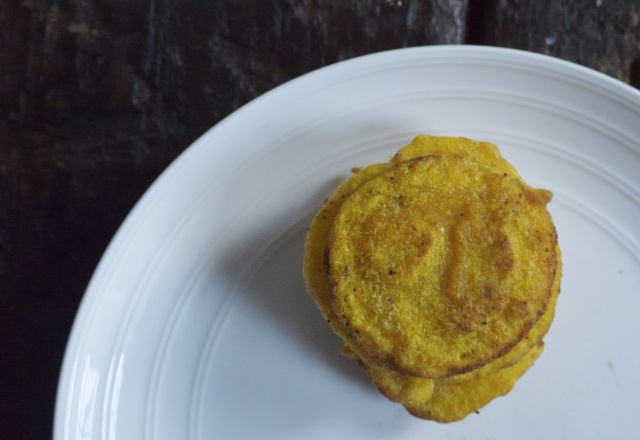 I’m so sick that I had to actually have a lie down after walking twenty metres to the fruit and vege mart around the corner from my apartment to get this garlic, so hopefully that is some indicator of the relative ease of this recipe that I was able to make it at all.

Okay, I do feel a tiny bit weird about that rant that I went on – I usually respond to that sort of thing a lot more privately by complaining about it to friends in real life or something. And I’m really lucky that the amount of bother I encounter online is relatively small compared to the tremendous amount that many people, including several friends of mine, put up with. But if you’re supposed to be the bigger person and ignore everything that hurts you, does that mean people get to just hurt your feelings forever and ever and that’s it? Seriously? You can’t sell me on that. And I’m very easily sold on stuff. So you know it’s a bad concept. You know what’s a great concept? Individually battering and frying every last clove in a bulb of garlic, twice, and then eating the lot, and then lying down and binge-watching Miss Fisher’s Charming Murder Mysteries on Netflix. Period procedural dramas are the paracetamol of television, and television is the paracetamol of life, and garlic is nature’s paracetamol. Then have some actual paracetamol, which is the real paracetamol of life, and you’re momentarily set, until the next coughing fit at least.

Laura Lee, Dreamers. The bae Laura Lee is back at it again with her moody, swoony style of music and I’m so happy about it.

11 thoughts on “garlic springs up where you walk, bells ring out baby when you talk”