I would describe my demeanour this week as Literal Zombie But With Slightly Worse Hygiene. The reason I have not blogged up until the very moment that you’re reading this is that I have been working on an enormous freelance project with a big company, it was a brilliant opportunity that I would’ve been an idiot to turn down, it did however take up every waking moment when I was not at work. Okay, I’m exaggerating, on Wednesday I took 30 minutes to eat a sandwich and do some thoroughly decent selfies. As I said, I’ve been working my usual hours too and on top of that am also attempting to deal with my personal life in that unspecial everyone-has-their-own-struggle way that we all are, so as a result my brain is FORLORN. But I got the project done and I’m proud of myself for it and I’m delighted that I was considered to do it: something had to give though and alas it was writing this blog post.

I’m already a bit daft at the best of times – I interpret stuff in a verrrry face value way (April Fool’s Day is honestly so embarrassing for me) and also sometimes forget a simple term and can only elaborately describe my way around it. I’m Occam’s Razor on Opposite Day, basically. This week it has been amplified x a squillion, for example: the recipe below involves cutting potatoes into a particular shape and I could not, just could not recall what the name of that shape was. I googled it, all I got was talk of shapes with names like decadocadecoflipagon which was all too spooky. I took to Facebook to ask: it turns out out the shape I was trying to name was…a cube. I forgot what a cube was. What about a long-ass cube though? I asked. A brick? Suggested my friend Charlotte. Reader, I hung my head.

Later this week I happened to look at my hand and was noticed, idly, that I had got something blue on it. I was wearing blue eyeshadow and it’s no surprise for the makeup on my face to migrate to the rest of my body in streaky patches as I go scruffily about my day. When it wouldn’t wash off however, I started silently freaking out. I messaged my two best friends Kim and Kate to say I was highly nervous because a vein on my hand had grown wide like pappardelle pasta and were the rest of my veins going to follow in this fashion and bust out of my stupid body, and as if I have time for this right now because I have this massive freelance project to finish. Kim was like “it sounds like a bruise” and Kate was like “yep it’s a bruise” and I was like “ohhh yeah. Bruises.” 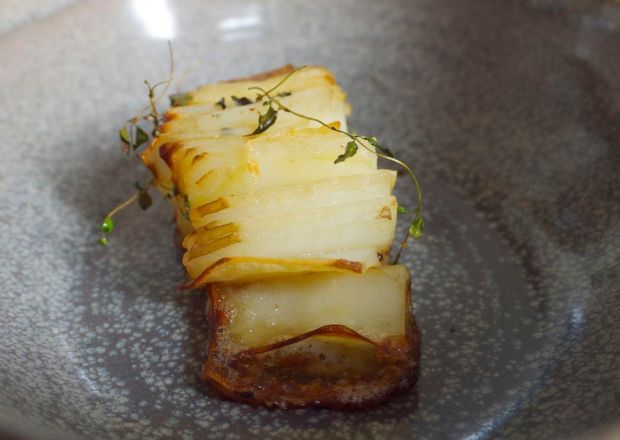 Amongst all this one needs to feed one’s self, and also to stop referring to one’s self as “one”, probably. Ever since reading about them on Food52 I’ve been completely entranced by Potato Dominoes, a method of roasting potatoes where you cut all the rounded edges off and then slice the remaining potato verrrry thinly in a brick shape (or a long-ass cube, if you will, this is also the point where I got into a spot of bother with mathematical terms) and push them over slightly – hence the domino name. It all sounds like a lot of faff for very little result but kindly believe my hype. Slicing them all thin creates a ton of surface area and edge bits to get almost hilariously crunchy and crisp, whilst providing a solid base to get all creamy and soft and lush. Is it worth it? Let me work it. Also yes, yes it is worth it.

Even if they fall apart they are still wonderful (the title of my new pop punk album?) but I nevertheless suggest making them for yourself a few times to get the hang of it before you feed them to, I don’t know, an ambassador’s husband. They’re not difficult, just a tiny bit fiddly. Before you get het up about the utter wastefulness of slicing all the rounded edges off the potatoes, I’m not suggesting you throw them out the window or anything. You can keep em to add to stews or soups or stocks, or do the obvious thing: roast them alongside the potato dominoes and eat them too, as a kind of sneaky chef’s treat.

Here I’ve used a ton of butter, which melts over the potatoes under the blasting heat of the oven, however I made them again with olive oil in the interests of vegan possibilities and simple curiosity. They were, unsurprisingly, equally excellent. If you don’t have any in the house, the thyme and capers aren’t crucial to the proceedings, but! Thyme’s resiny, sweet herbal flavour is beautiful with the buttery, nutty potatoes, and capers are so salty and good and get as crunchy as the edges of the potatoes that they’re adorning.

potato dominoes with thyme and capers

adapted gently from a Food52 recipe, which probably has way more helpful instructions than mine.

Set your oven to 220C/450F. Slice all the rounded sides off the potatoes so you end up with a potato brick/cuboid thing. Slice crosswise (I think that’s the word? Not lengthwise, basically) through the potatoes, as thinly as you can muster. Push them into place so they hold their brick shape even when all sliced up. Use a spatula or pancake flipper to transfer them to a baking tray, and push them over slightly so they are like a pile of tipped-over dominoes, or a spread of cards, or a pile of books on a lean, that kind of thing. Surround them with the off cuts of potato if you like. Generously layer slices of the butter across the top of each potato, and use any remaining butter to dot on top of the off cuts, if you’re using them.

Roast for around 20 minutes, although much will depend upon your oven and the type of potatoes you’ve got. The more waxy and watery the potato, the longer it will take. Scatter with the thyme and capers, eating a few offcuts on the way to test for done-ness, and return to the oven till the capers are crisp and the potatoes are cooked through and thoroughly golden on the outside.

I fear I have not emphasised enough how delicious these are. They’re SO CRISP. But SO SOFT underneath. It’s SO NOT a huge deal to have to slice them up all funny. All I could find was stupid waxy potatoes that seemed to be filled with water and they STILL turned out gorgeously browned and crisp. I have SO MORE CAPITALISATION where that came from. Anyway I was eating a big plateful of these the other day and my brain was at a particularly low ebb, like the tide carrying any knowledge had washed away out to sea and I was too tired to chase it, or indeed, to come up with a better metaphor, and I was looking at these beautiful, golden and brown, crunchy crisp potatoes, and I got the theme song from Friends in my head and for one rather silly second I attributed the qualities of being there for you when the rain starts to pour and like they’ve been there before to these potatoes and felt comforted. It’s like the potatoes gave me the supportive words I needed but it turns out those words were in my heart all along.

Speaking of words that were in one’s heart all along, I found myself doing karaoke last night for the second Saturday in a row and it’s amazing how good for the soul it is (apart from wondering, injuriously, why there is no audience out there who wants to hear a moderately terrible singer and thus I can never become a pop star.) All my emotions were slammed around anyway because it was the leaving party for my dear, beautiful friend Charlotte who is bereaving us of her presence but blessing the lesbians of London by moving there for good; on the other hand my angel friend Kate had just returned after a month overseas. Considering I was already at the point of feeling like I was receiving bolstering messages from a bowl of potatoes, you can imagine the near-hysteria in the air last night. Why not add lusty singing into the mix? It was a wonderful night though, so full of support from actual humans and hugs and laughter and new friends and bottles of Rose wine which kept appearing out of nowhere and – once I’ve finished my shift at work that I’m about to head off and do – I made it through this week. Thanks, potatoes.

If you, too, are on a potatoes vibe then may I also suggest checking out my recipes for Quite Fast Garlic and Parmesan Potatoes, Baked Potato Salad, and/or Halloumi, Fried Potato and Raw Fennel Salad.

title from: Nicki Minaj’s wonderfully sweet and pro-woman song, Girls Fall Like Dominoes. We are so lucky to have her.

I don’t know if it’s indicative of where my head’s at but I’m all “no time like the present to develop an odd obsession with Roxette”, specifically the song The Look which I’ve listened to at least fifty times this week, conservatively estimating. It’s horrifyingly intoxicating. I’m listening to it right now.

next time:  I made AMAZING white chocolate and burnt butter ice cream and I’m very excited about it. I just have to get photos of it before I eat it all, thus far a losing battle.