My mind bounces around a lot from idea to idea; sometimes I swear it bounces right out of my head leaving me to fend for myself, for example as I sit here now with my designated two hours of time to myself to blog and instead I am staring into the middle distance thinking small fragmented thoughts about nothing in particular, being all “have I ever even had an opinion about food in my life?” It’s like a nervous horse, the more you try to corral it the more likely you are to get a hoof to the neck; but on the upside, the same brain zig zags are what got me thinking up, out of nowhere, the recipe for almond milk and coconut sugar creme brulee. 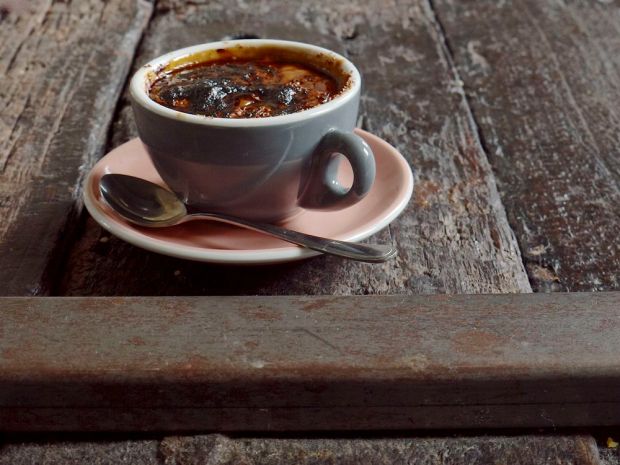 (It also got me googling, against my better will, “where is a snake’s dick located” during a perfectly sensible conversation on the group chat with my two best friends where someone happened to mention an ouroboros in a metaphorical way. The result: you uh, don’t want to know how the sausage is made.)

Almond milk creme brulee though: what a calming thing to think about. It’s very simple – thickened over a low heat with cornflour to provide that luscious texture, with coconut sugar giving a particular deep caramel vibe – although you could just as easily use brown sugar. It’s not as creamily voluptuous and straightforwardly sweet as a traditional creme brulee, but it has its own charms: the gentle flavour of almonds suspended in a thick yet incredibly light custard, the delicious and almost savoury toffee flavour of the burnt sugar on top, powerless under the heat of the grill, the crunch of said sugar against the soft custard, and of course the fact that it takes hardly any time or effort to come to fruition.

The idea for this recipe appeared to me suddenly like someone was whispering it in my ear (I presume this was not actually the case) and I decided simply to act upon it. It made for a serene little lunch in its entirety and while it would not be hard at all to expand it out to make for more people than just yourself, sometimes it’s nice to selfishly throw some effort for you and you alone, right? You count too.

In a small bowl – I just use the cup measure that I’m going to use for the rest of the almond milk – mix together the quarter cup of almond milk and cornflour till smooth. Scrape this into a medium sized saucepan and stir over a low heat till it has thickened some. Add the remaining almond milk a little at a time, continuing to stir, until it has all been added and the mixture has thickened into something fairly custard-ish looking. Remove from the heat and stir in the two heaped tablespoons of coconut sugar and the vanilla.

Spatula into a smallish ramekin of around one cup capacity. Sprinkle evenly with the remaining coconut sugar. Place your ramekin or serving dish or whatever into the oven, and turn on the grill. Putting it in the oven before you turn on the grill helps it to heat up more gently. Keep an eye on it, and remove it once the sugar has largely melted and is bubbling in places. Leave for a few minutes before cracking in.

Almond milk is really pretty accessibly priced these days, but you could always replace it with coconut milk for a more pronounced flavour, or with half milk half cream. Whatever works for you. If you have a small kitchen blowtorch then that will be a lot easier and faster than caramelising the sugar under a grill, but it does work!

This week and the week before it have been kind of intensely busy in both work and life, and with Wellington on a Plate coming up it’s going to get even busier, so when I’m not dashing around Doing My Thing I’ve been sitting very still doing very simple things: watching a continuous stream of old Nigella videos on youtube; watching INXS videos on Youtube, reading old, old America’s Next Top Model recaps…you get the picture. No alarms and no surprises, please: one small, spoonable pudding is achievable though.

On that note! If little spoonable puddings appeal to you, I recommend also taking a look at my recipes for Instant Coconut Custard Semolina; Poires Belle Helene For One; or Blackberry Fool for Two.

In lieu of any actual further thoughts, bouncy or otherwise, here’s a good selfie for you.

title from: Mystify by INXS. Yeah I’m still super obsessed with them. I feel like it’s not going anywhere anytime soon.

Uh so awkwardly all I’ve really been listening to is INXS, and I found another version of Disappear that I really love. This time it’s a live version from 1990 and Michael Hutchence’s voice is aggressively confident.

Crazy? Yes! Dumb? No! by Mint Chicks is a modern classic that I hadn’t heard in forever and then suddenly heard two days in a row, a good a sign as any to include it here.

next time: Honestly I don’t know, I need to cook myself something as asap as possible.