My first recollection of the song One Night in Bangkok, from the troubled yet oddly compelling musical Chess (especially since it’s like two and a half hours of people singing about literal games of chess, it’s really punching up in the compelling stakes) was when I did a dance to it for one of my jazz dance exams, probably around 1994-ish timeline-wise. I can still remember quite a few of the steps, because muscle memory is funny about what it holds on to.

The track that I danced to had been dubbed to cut out what I later realised was there: this long, rather indulgent overture that goes on and on and on rather endlessly until the musical phrasing spins around and all of a sudden the beat drops and there’s a white guy rapping, kind of.

At 4.20 (nice) this morning as I drove in a taxi to the airport with this French guy who I used to work at Library with nearly every single day to farewell him as he moves overseas forever, it made me think of the overture of this song. I was with his flatmate and dear friend, and we were like…we knew this was coming ages ago but how is it so suddenly this very moment? Obviously I’m going to miss this guy heaps but it made me think about missing people in general. You’re going along, in the overture, everything feels fine, its repetitive nature lulls you into thinking well, I guess this is the song. And then suddenly there’s a tailspin and the beat drops and everything is completely different and you’re like, oh man. This is the song now. And the new bit of the song is so different to the overture that you’re like…why can’t I hear that overture right now, how is it so impossibly different to right now, how did it used to be all that there was. 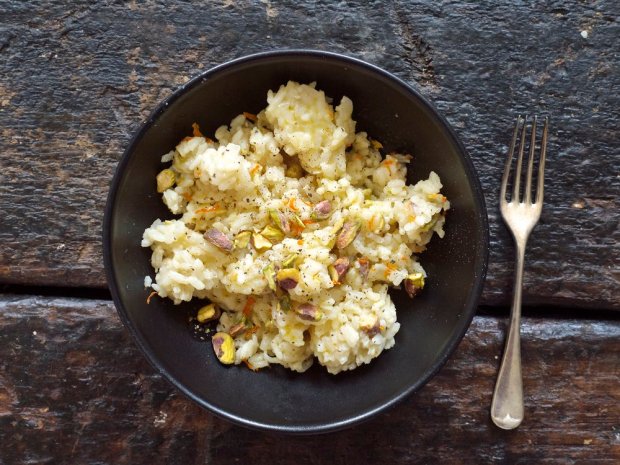 Anyway, the passage of time, wow, it’s a thing, I’m soooooo deep for noticing it. Whether or not the earth turning as it usually does has got you caught up or not, there’s really not much else to do right now but eat comfort food, and in the case of this recipe it’s a foodstuff I turn to often in times of need. Risotto.

I’ve talked about risotto so much On Here that there’s almost nothing new I can come up with about it; I think calling it “white noise in food form” was my highest apex of descriptiveness. It comforts in the making as well as the eating – obviously it’s soft, warm, creamy rice, as bland or as punchy as you want it to be, as close as you can get to actually eating a large fluffy blanket (okay, eating a freshly baked loaf of bread does challenge this notion) but the power of the calming, soothing, endless go-round of stirring hot liquid into the grains of rice and transfixedly watching them swell up slowly cannot be overstated. 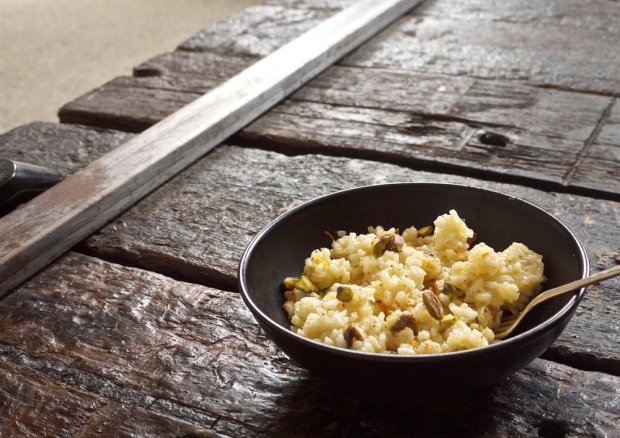 A friend and coworker recently told me they were vegan now and I was like “wow, vegan, huh? That makes me think of…the word vegan.” And so I wanted to try and make a creamy as heck risotto without adding any animal products (specifically: my usual butt-tonne of cream and butter); I also wanted it to be fairly gentle and simple and non-aggressive.

It’s olive oil that gives this risotto its magical texture and richness; apart from that there’s just some pistachios and orange interrupting the soft grains. It may be non-threatening but it’s by no means bland though. The olive oil gives this intensity of buttery flavour and merges with the starch released by the rice, emulsifying into the most creamy and pleasingly gluggy finished product. The pistachios add soft crunch and their own almost-buttery flavour, and the orange brightens it all up but in a mellow way. It’s truly delicious, the flavour unfolding in this elusive way that makes you want to chase it with mouthful after mouthful.

This makes a large batch but the leftovers are strangely good cold from the fridge and if you roll them into tiny balls and dunk them in breadcrumbs before frying in some quantity of hot oil, you can get some highly serviceable arancini; crispy on the outside and creamy within.

Heat a generous tablespoon of extra virgin olive oil in a large pan. Finely dice the onion and tip it into the pan, and fry the pieces gently until they’re a little translucent and soft but not brown. Now tip in the uncooked rice grains and stir them in the oily onion for a minute or two. Pour in the wine or vermouth – it should bubble up merrily for a bit before settling down. This is where the stirring starts. Stir and stir over a medium heat (although I tend to impatiently turn it up high) till the rice has absorbed almost all the wine. Now add the stock or miso and the mustard, plus two tablespoons of the pistachios, and the orange zest, and continue adding water from a recently boiled kettle, about a cupful at a time, stirring and stirring till it’s absorbed and you can add the next one. Every time you add more water, also drizzle in a little more olive oil, about a teaspoon or so. Sorry I don’t have specific measures here, you just add liquid till it’s done, you know?

Once it’s done it should be creamy and thick, with no granular bite when you taste the rice. Just yielding softness. Add salt and freshly ground black pepper to taste – and indeed, more mustard if you like. Serve drizzled with more olive oil, and squeeze over some of the orange’s juice. More salt and pepper is good here – and finish with a scattering of cheerfully green pistachios.

It maybe sounds like there’s a nervous-making amount of olive oil in this but there’s not much of anything else, and you’re only adding a little at a time. Some of the cheapest extra virgin olive oils still have massive flavour, so don’t feel like you have to go high end here. Don’t skip out on the salt and pepper either, it ties everything together – salt makes everything taste more of itself, and I never used to like black pepper but it was just what I felt like having here – plus its dull heat helps stop the whole thing being too sleepy.

I know I bang on about comfort food and like, it’s not going to solve everything, but whatever’s going on you still need feeding and honestly, risotto is just the best, I can’t recommend it enough. If you can’t breathe, if you can’t think, if you can’t stand up, I believe that you can make it. The risotto I mean, but like, in general too.

As I said, I have five hundred twenty five thousand six hundred risotto recipes, but continuing in this vein, if you want more maybe try my take on Nigella’s Pea Risotto (which can be made vegan) or this oven-baked risotto if standing and stirring is beyond you right now (and if it is: I get it.)

My song that I can’t stop listening to this week is Montaigne, Lonely, but beautiful as it is I’m trying to counteract it with taking Love Myself by Hailee Steinfeld repeatedly like it’s medicine.

next time: well it’s DECEMBER THE DAMN FIRST tomorrow and I’m NOT prepared in ANY way but maybe I’ll start thinking about xmas food.