At ten seconds to midnight on the last day of December I led the countdown from behind the bar where I was working. At midnight we yelled Happy New Year and hugged and clinked our glasses of house sparkling wine. Then I yelled an expletive in the direction of 2016. And then, I immediately blasted Careless Whisper over the loudspeaker. (That’s right, “an expletive.” I’ve never sworn before on this blog and for some reason cannot bring myself to do it now after all these years out of some vague fear of being sent to the principal’s office or something even though swearing is harmless and a pretty delightful way to add texture and colour – or is that off-colour – to your words, generally? Why am I so hung up on this?) Anyway there’s no great conclusion to this anecdote, but the crowd went wild and no matter what happens this year I shall at least treasure the memory of standing in front of a lot of people – one of my favourite activities! – and seeing their faces as the glorious and iconic sax riff started playing. Started with a banger, if not a bang.

Earlier that same day I made myself gazpacho, acting upon a strong craving. I never crave soup. I have barely been feeling passionate about any kind of food lately in fact. But, not wanting to let these rare positive thoughts about liquidised vegetables get skittish and run away, I decided I might as well try and do something about it.

This soup is really, really simple. The only difficult thing is that it’s best made in a blender, if you don’t have one then like…I don’t know. Make something else. You could use a food processor, but a blender is better, something about the centrifugal motion and slicey knifey stuff. The point is, it’s really delicious, which, thank goodness, since I hardly ever have massive soup-adjacent desires in the first place. Soup always has to do everything backwards and in heels in order to impress me at the same level that other food does dancing forward in regular shoes (that’s a Fred and Ginger reference in case I briefly lost you there.) I use cherry tomatoes which, with their youthful sweetness, give a slightly bouncier tomato flavour but very ripe regular tomatoes would be absolutely fine. I also use only red capsicum instead of the usually prescribed red and green, because green ones tend to be unluscious and bitter, whereas the red ones, mellow and riper, echo the sweetness of the little tomatoes. The only other way in which I stray from the traditional is adding a pinch of cumin to lend a little earthy depth.

aw man, just realised that drizzle of olive oil kind of looks like a dick

This really does get better the next day so if you can forward-plan your cravings, so much the better, but immediately poured from the blender it’s wonderful, all thick and cold and tasting of sunshine, of soft grass under your bare feet, of cloudless skies, endless and blue, of other summer-adjacent imagery designed to inspire a vague sense of nostalgia and longing within you.

Tumble the cherry tomatoes into the blender, reserving a couple for garnish if you like, and a couple to just eat for fun because they’re so delicious. Remove the core from the pepper and slice into rough chunks (in all honesty, I just tore it up with my bare hands). Run the bread roll under a cold tap – an unusual and counterintuitive-feeling activity, I grant you – and rip it into soggy pieces, and put all of this in the blender with the tomatoes. Tip two cups of cold water in, followed by the vinegar, olive oil, and cumin. Blend thoroughly till it forms a thickish, uniform looking puree. Taste for salt, and indeed, whether or not you think it needs more cumin, olive oil, vinegar, whatever – and blend again. Let it sit for an hour if you can, which will thicken it up, but you could just eat it right away.

I served it drizzled with more olive oil, scattered with freshly ground black pepper, and strewn with chunks of very ripe avocado and fresh thyme, since it’s what I had and I figured I might as well lean into the untraditional nature of it. I also halved one of the reserved cherry tomatoes and floated them on top, cutely. This makes enough for two servings. 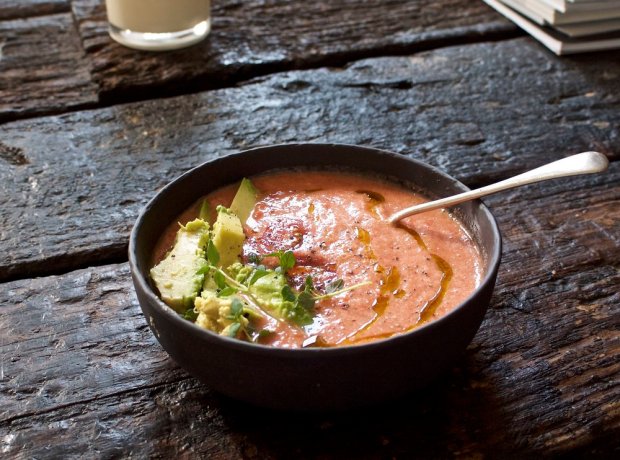 The weather is actually resolutely unsummery at the moment but this soup nevertheless does its best to make you feel like its sunny, and is an ideal way to use seasonal produce if that’s what you’re into.

I have no doubt that you absolutely noticed, amongst the hustle and bustle of Christmas, New Years, public holidays, disrupted routines, taking stock of the year’s happenings and mourning celebrity deaths, that it’s been a while since I’ve blogged. This was because my laptop sulkily kept turning off mid-use, eventually giving up on the whole being-a-laptop thing altogether. I’ve also been monstrously depressed and anxious and unable to muster up the slightest inclination to cook for myself. Luckily, it’s all fixed now!

The laptop that is. Haha.

While I was waiting for it to be fixed, Kate very very kindly lent me hers. And rapidly, I decided to write about some things that were going on inside and outside of my head. The words came easily, pressing publish did not, but well, I’ve gone and bloody done it now. I’m not going to say too much more about it since you might as well read it – if you want. My whole thing was not wanting so much to be like, making a dramatic point about how I’m – gasp – going through some stuff, but more to highlight how sucky the system in New Zealand is if you’re trying to ask for help, while also just being like, I’m a human going through some stuff and the more people who talk about it the more it is normalised and I feel like I can do that, I can take a chance on talking about it where maybe other people can’t since I appear to not worry ever about the consequences of what will happen if I write about things going on in my life. On the other hand, it’s something I’d hidden with varying degrees of success for a few months now, so, sometimes acts of what could be called bravery take time to get into.

With all that in mind, my wanting to make myself something, and for that something to be vegetable-based soup, feels like a small victory. Super small, I mean. I still haven’t put sheets on my bed. I got drunk last night and lost my phone and then found it and then immediately lost it again and was like well, fair enough, I guess I’ve lost it. (I was at work, so I’m going to go pick it up, although it occurs to me today that being in a familiar place does not necessarily mean I didn’t somehow drop it in the bin or lose it inside a large glass of water or something.)

But I’m trying. Well, I’m trying to try. Which is legit another victory.

title from: Death Cab For Cutie, The New Year. I am a sucker for an achy-breaky song about this time of year. Amongst other things.

Breezeblocks, alt-j. Wowwwwwwww I like this song a lot. Also wowwww I am late to the party on alt-j.

Zayn Malik/Taylor Swift, I Don’t Wanna Live Forever. PREDICTABLY GOOD, WHOM COULD HAVE PREDICTED THIS, I FEEL LIKE I SHOULD SAY A VARIATION ON THE WORD PREDICTABLE AGAIN NOW

next time: well hopefully I want to cook for myself more. So I’ll see you in June. JK, I’ll get there somehow. It helps when there are other people to cook for, and luckily there’s a lot of love-to-cook-for-them type people in my life.