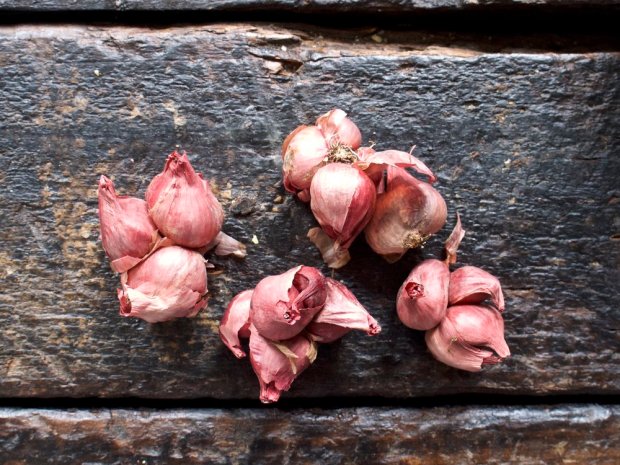 I’ve lived in my current apartment for just over a year now. On Sunday, for the first time since moving in, I went to the vege market which happens weekly and is located exactly one block away. Thank you, Ritalin! I’ve spent a whole year full of good intentions about being a vege market person who gathers up bushels of seasonal produce to nourish my hot bod, but it’s never once happened. Either I cannot spatula myself out of bed with any conviction, or I make it there and am overwhelmed and panicky and can’t make a decision and forget how to breathe and have to leave immediately.

Not this Sunday though! Instead I strode, with unprecedented purpose, the short distance of one literal block from my apartment to the carpark filled with people and vegetables. And then went on a brief tangent where I saw this tiny, silky dachshund and a voice in my head said Follow That Dog, They Will Lead You To The Vegetable-Related Inspiration You Seek. In a dog-induced fugue state I trailed it, my low-bellied small-snouted muse, until it went and stood by….some cucumbers. I was jolted out of the trance, all like, wow I don’t feel like cucumbers and maybe this dog isn’t my spiritual vegetable guide but in fact just following its owner.

Luckily a more reliable voice said the words “maple bourbon roasted shallots” and suddenly I was inspired anew. This idea expanded out to include radishes (plus some beetroot that I bought for good measure for a later time) and with a bag full of pink-tinged vegetables, I left the market unflustered and happy.

Maple and bourbon are highly compatible bedfellows – the sweetness of both overlapping but also being tempered by the woodsy, smoky autumnal elements of the syrup. I figured that with shallots – mellow and onion-y – and the peppery, crisp radishes, it would make for an extremely delicious addition to say, some couscous or a salad. 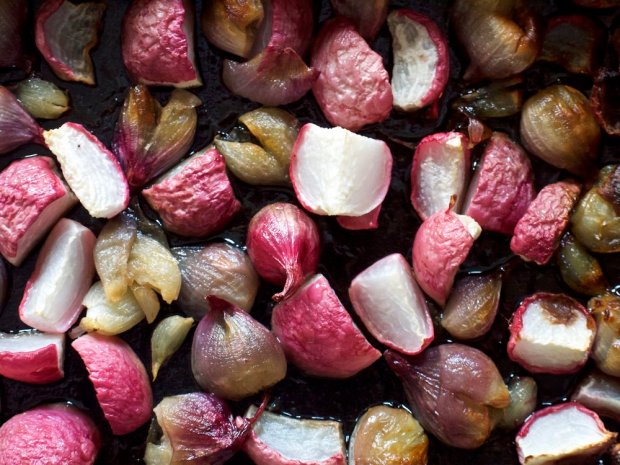 Unfortunately – or not – we’ll never know how these damn things taste in that capacity because, after having let them cool somewhat and idly tasting a few to see how the combination worked…I lifted the roasting dish to my face and somehow – in my second fugue state of the day – demolished the entire lot, frantic forkful by frantic forkful, in about twelve seconds flat.

So, well, at least you know they’re really good. The shallots get all soft and caramelised and sticky, and the bourbon gives this rich depth. Shallots are a total pain to peel, but they look so, so pretty – like bunches of dried dusky pink roses, delicate and papery. If you’ve only ever had radishes raw before, they’re a revelation once some heat is applied, with their peppery bite softened into something quite luscious. 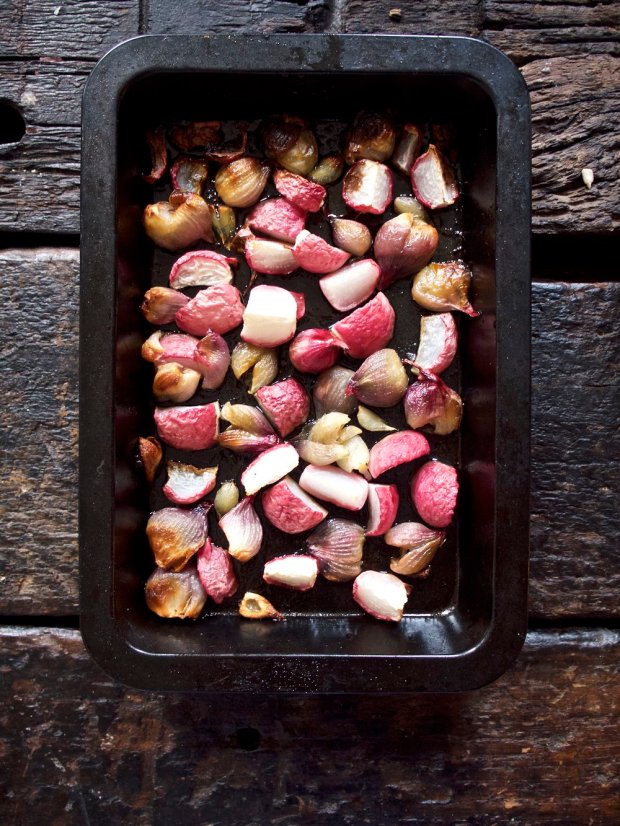 Should you have more restraint than me; here’s some suggestions for what to do with these things other than merely hoofing them in a daze. You could stir them through couscous with some rocket and toasted walnuts to respectively echo that peppery-smoky vibe; you could make a ton more and serve it alongside roast chicken (and consider using a marinade of maple, bourbon and olive oil for the chicken itself); you could boil some lil new potatoes and slice them up and stir the shallots and radishes into them with maybe like, some chives and a vinegary dressing to make a charming potato salad; you could put them in a bowl as part of a tapas-type spread with hummus and chargrilled peppers and flatbreads and whatnot, and finally, you could serve them as a component of a very zen rice bowl.

a (vague) recipe by myself

Peel the shallots, which is fiddly and annoying I grant you, but if you press down on them with the flat side of a large knife the skins should split making it easier to slide them out. Chop the radishes into wedges. Place them all in a roasting dish in which they fit snugly. Drizzle over plenty of olive oil, the maple syrup, the bourbon, and a good sized pinch of salt. Give it a stir if you like or just hope for the best.

Place in the oven and leave for around an hour till everything is lightly browned and tender and looking, y’know, cooked. Use however you like.

Or you could, honestly, just hoof them in a daze in their entirety, it’s 100% a good time.

As you can see, it’s been a while since I’ve blogged, despite my insistence upon returning to form as quickly as possible. But this is me trying, and I’m pretty pleased with the results. I will absolutely be cooking more and more and more – the other day I made myself GRANOLA – and the fact that I can go to a vege market without having a meltdown is definitely a good sign, even if I get waylaid by an occasional mysterious dachshund voyage. And honestly it’s nice to write a fairly straightforward blog post free of deep confessional angst (even if it’s always there ready to go.) There’s this bit in the Simpsons where Moe is telling Homer that he’s better than dirt, but not that fancy dirt with all the nutrients, and that’s how I’m feeling right now – just a tiny dirt grub, slowly getting better and better. 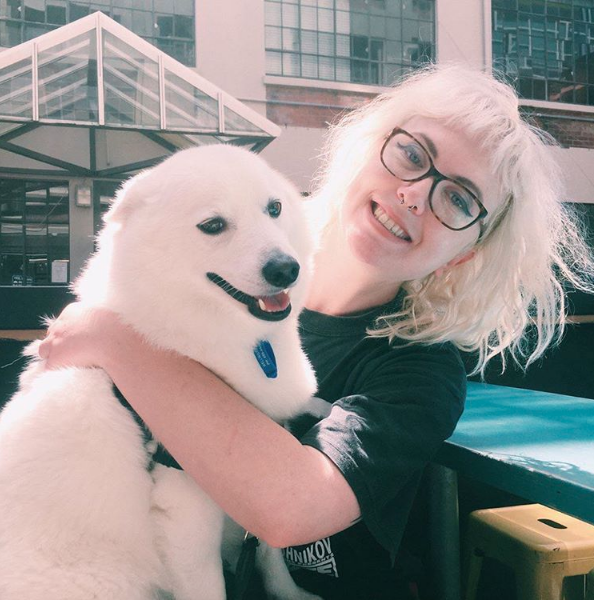 An good boy, and a dog called Ghost

PS: It’s Valentine’s Day today, and if that means something to you then I’m happy for you and not going to rain on your parade. I spent the morning with my work family at an adorable high tea put on by our bosses followed by some intensely loved up messages with my two best friends Kim and Kate and I cannot think of a more lovely way to celebrate the day. And during that high tea I had the most amazing cucumber sandwiches with minty cream cheese and I was like, oh my god, that dachshund was actually trying to tell me something…But whatever you’re doing – whether it’s wallowing in hearts-for-eyes-ness or studiously ignoring it, I hope it’s fun.

title from: my ultimate valentine Lana Del Rey and her incredible song Cruel World which, ugh, I love so much.

Calexico, Alone Again Or. So I have been loving the original version of this song, by the band Love, for a long-ass time now, but this cover was recently brought to my attention and it’s so bouncy and ebullient and good and honestly, a very worthy take on a truly brilliant song. Listen.

Beyonce’s performance at the Grammy Awards. It’s SO IMPORTANT. I”M SOBBING. WATCH IT.

Next time: whatever I make I’ll like, wait to use it before I eat it mid-process. Or will I?