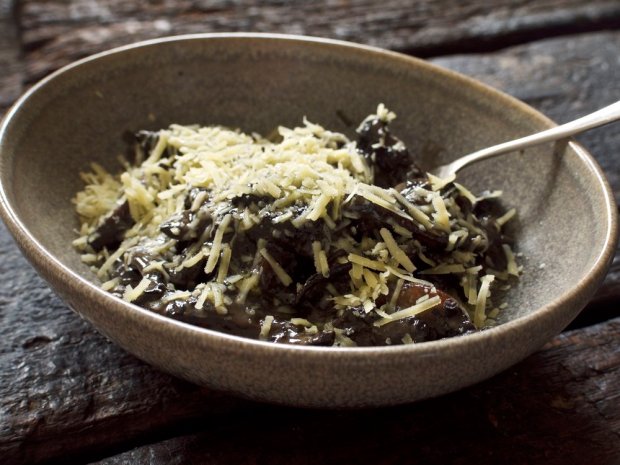 As February draws to a close, it means one thing and one thing only: we are smack bang in the middle of Pisces Season, people. What does this mean? It means every time I get super irrationally emotional over something, I’m all, “classic Pisces Season.” A leading characteristic of the Pisces star sign, you see, and if you haven’t worked this out already, is emotional-ness.

However, sometimes emotions are entirely reasonable, such as when someone who has become one of the most important people in your life over the past year leaves the country. What can you even do in these situations? Well, you try and spend as much time with them as possible, and on the Monday before they go, you wait until they’ve finished their shift at work and then make a midnight feast for the both of you while you watch Desperate Housewives.

It being Monday, or “Payday Eve”, and me being extremely me, once I’d purchased mushrooms and cream at the guest’s request I essentially tried to forage everything else from what was already in my pantry: some tomatoes leftover from a team barbecue that day which I’d nicked; some black garlic and walnut butter that my mum had sent me; some vaguely elderly beetroot that I’d forgotten I’d bought at the vege market the previous week; some vermouth and bourbon from my brief flirtation with trying to have a decent liquor cabinet; it goes on.

Mushrooms fried with garlic and cream are hardly revolutionary, but these ones are incredibly delicious: the vermouth hisses and disappears in the heat – relatable – leaving only a lick of winey flavour, and the cream reduces down to the most magnificently savoury sludge. Not necessarily the most appealing words, but you should know that they were the star on Monday and I’ve made this three times since because I love it so much.

an extremely vague recipe, but I feel like you can handle it

Brush any dirt off the mushrooms and slice them up. Heat a generous couple of tablespoons of olive oil in a large frying pan and tip the mushrooms in.

Let them fry in the hot oil till they soften and darken and reduce down somewhat – till they’re fried, basically – then pour in some vermouth, a couple of tablespoons at the most. This will hit the pan in a whoosh of steam and smell incredible. Stir till it’s evaporated, and then either slice or squash the clove of garlic and add it to the pan, followed by the cream – as much as you want, really. Start with a few tablespoons and then just keep pouring till it feels right. Carry on stirring over a high heat till the cream has reduced down somewhat – you want this thick and saucy.

Remove from the heat, pile on some parmesan cheese if you wish, but you don’t have to, and transfer to a bowl. Eat the lot, no matter how much you’ve made. 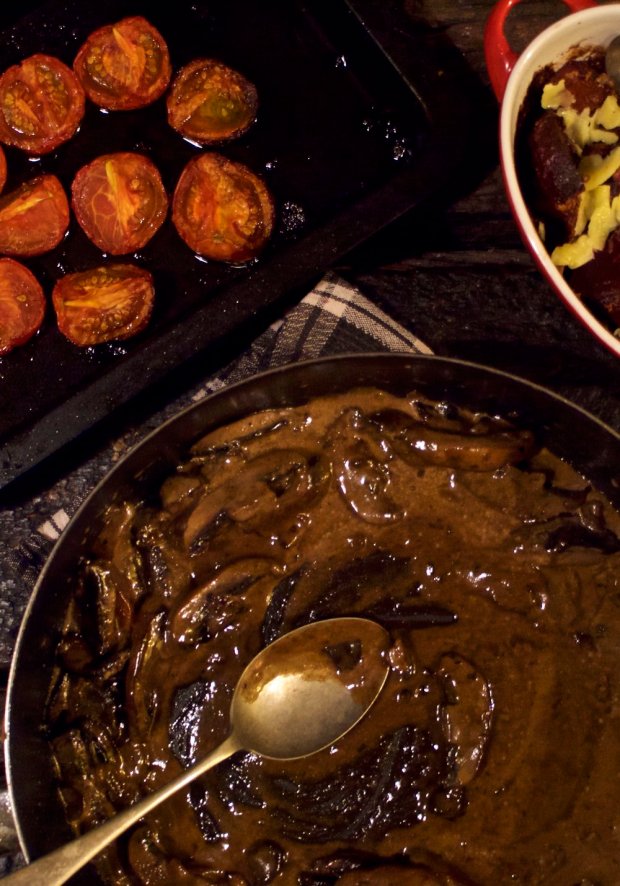 The beetroot and tomato dishes were highly opportunistic on-the-spot flights of fancy but they both worked out well so I thought I’d pass on some form of a recipe of them both here. Baking beetroot in cream – leftover from the mushrooms – gives the earthy bitterness of the vegetable a fantastic mellowness, and the walnut butter makes everything almost fudge-like in texture. If you don’t have walnut butter, you could use cashew or almond butter or indeed, just leave it out and you’ll still have a good time. 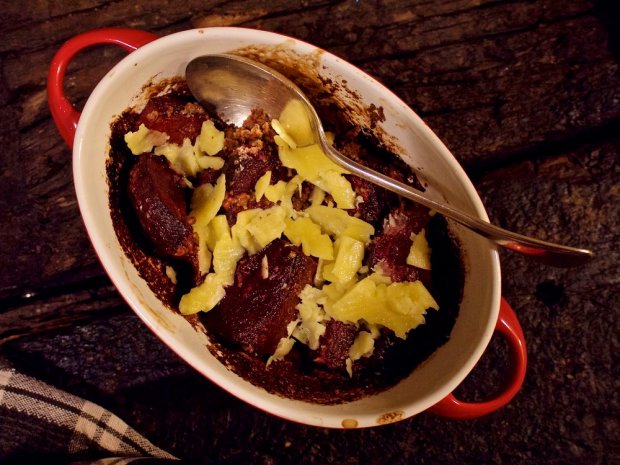 The tomatoes got a dash of bourbon on them because it was still there beside the stove from when I made those shallots and radishes last week, but it turns out they go well with these guys too. I just happened to have coconut sugar and its smoky intensity went perfectly with the sweetness of the tomatoes and the bourbon. They were sticky and sweet and bursting with juice and just so good. And I can’t even tell you how amazing the syrupy roasting juices tasted once all the tomatoes had been prised out.

Set your oven to 180C/350F. Chop your beetroot – however many you have – into quarters or chunks or whatever, really, and pile them into an oven dish that will comfortably fit them. Pour over enough cream so they get their feet wet but aren’t entirely submerged, and spoon over some walnut butter. Mix it all together so some of the cream and walnut butter amalgamates, then bung it in the oven and let it cook until the beetroot is extremely tender. Top with parmesan if you like.

Again, set your oven to 180C/350F. Slice a bunch of ripe tomatoes in half and lay them, cut side up. Sprinkle over a little coconut sugar – like just a pinch per tomato. Follow this with a good solid drizzle of olive oil and then drizzle with a little bourbon – it’s easier to pour it into a spoon and then shake this over the tomatoes than trying to pour directly from the bottle. Finally sprinkle over some salt and roast em till they’re, like, roasted.

So like, because it was at midnight when I was taking these photos I completely concede that they are Not Great and indeed, it was my own vanity that caused me to take more photos once I’d made the mushrooms again in the daylight, just in case a casual reader of this blog saw my night time photos and threw their laptop out the window in horror. But it all tasted so, so good, and it was such a nice night, that honestly: I don’t care.

Okay I guess I do care since I bookended this blog post with nice photos of the mushrooms but still: I don’t care! (I care so much.)

On Thursday night I finished my shift at work and then proceeded to not get any sleep until at least 7am, because this particular person had to be at the airport at 4am. I may or may not have got emotionally drunk; I may or may not have cried AND fallen asleep at the airport; I may or may not have written an extremely overwrought letter to this person about what they mean to me and then left it in the car and then had to clamber into the boot through the backseat because I couldn’t work out how to open said boot. However I’ve also come to the conclusion that Melbourne isn’t soooo far away and I could possibly even visit if I ever get my act/and/or savings together. And as they sing in the musical Wicked – and I warn you, it’s about to get disgustingly maudlin for just one second here – because I knew you, I have been changed, for good.

Due to some spectacularly terrible luck or carelessness, this is the third time I’ve written out the blog post after accidentally deleting it, twice. By this point it feels almost surreal, like I’m going round in circles, but I think right here is definitively the end of this blog post. And seriously, it’s been barely a week and I’ve made those mushrooms three more times. They’re good, people.

title from: LCD Soundsystem, Someone Great. Okay I wasn’t QUITE done with the maudlin.

I am on a sincere Pink Floyd god damn BUZZ right now and am revisiting Roger Waters’ live album In The Flesh a whole ton. Just try to not fall in love with the immensely sexy yet unsexily named Doyle Bramhall II when he sings the chorus to Comfortably Numb, suckers.

I saw Trainspotting 2 the other day and it was exactly what I wanted it to be; it also coincided with me being extremely into a genre of music that I like to call “Let’s drink lager and headbutt Liam Gallagher”. To that end, the Prodigy’s remix of Iggy Pop’s Lust For Life is honestly really good.

next time: I have not made ice cream in FOREVER, friends! And since it’s finally looking like summer in Wellington, it feels entirely appropriate. Watch this space.