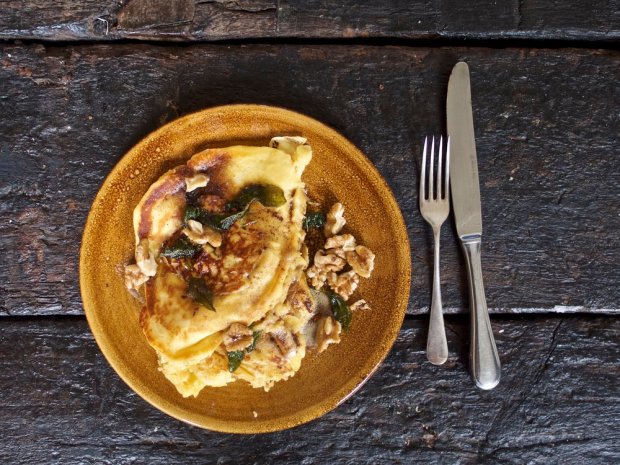 It’s been one heck of a time lately: there was a fire at the Burger King under my bar at 1am on a Friday night and we had to evacuate, the next day the bartender whom I saw more than anyone else in my life had their last shift at work, then I went up to Auckland to support them in a cocktail competition they were a finalist in before saying farewell for real when they moved to Melbourne, I then went home-home for the first time in forever, saw my parents, my nanna, my parents’ chickens and the less-disdainful of the two cats; flew home to Wellington in the middle of a cyclone on a flight so bumpy that they couldn’t serve us drinks; contracted a horrible cough, saw my brother who was down in Wellington from Auckland, fell down two flights of stairs on two separate days and made these halloumi pancakes. On top of that I’ve officially entered Existential Angst and Self-Evaluation mode as my birthday rapidly approaches.

But back to these pancakes. A friend crashed at mine on Wednesday and when we woke up I was like, are you hungry? And they were like, nah. And I was like, me neither. But too bad, because I’ve had this really good idea and I’m going to make it for us.

My idea went thusly: thick slices of golden fried halloumi, encased in pancakes as pillowy as the pillows you wrenched your head from to cook yourself breakfast. Fluffy, soft pancakes giving way to chewy, buttery cheese. Fried sage and walnuts on top, for contrasty crunch and because fried sage is just really, really good.

I went for an American-style pancake, the sort that’s squat and thick rather than delicate and crepe-like, and adapted a fairly standard Nigella recipe for the batter. It’s honestly really easy, for all that X stuffed with Y implies massive fiddly-ness. My only advice is don’t be lazy and try to put four pancakes into the pan at once because they’ll all squish together and look horrible (in the spirit of egalitarianism, my friend and I got one decent pancake and one extremely ugly pancake each) but once you’ve scattered them with crumbling fried sage leaves and crunchy walnuts and the leftover browned butter it really won’t matter how it looks.

Briskly mix the flour, baking powder, sugar, eggs, and buttermilk together in a mixing bowl (a fork will do for this.) In a large nonstick pan, melt half the butter, tip it into the pancake batter, and stir it in. Set the batter aside. Place two of the slices of halloumi into the pan over a high heat, and fry for about ten seconds before scooping a half-cupful of batter over each slice so they are snugly covered. Continue to fry till bubbles appear on the surface of each pancake, then carefully flip them over and fry on the other side until you’re confident that they’re cooked through. Transfer to a serving plate and repeat with the remaining halloumi.

Melt the remaining butter till browned and sizzling – the pan will be pretty hot by this point so it won’t take long – and drop the sage leaves in. Quickly remove them once they’re crisped and curled up at the edges, and scatter them over the pancakes. Tip the walnuts into the pan and give a quick stir to toast them briefly before removing the pan from the heat and scattering the walnuts (along with any remaining browned butter) over the pancakes.

Halloumi on its own is obviously an unimpeachably perfect foodstuff, melting and yet solid, bulgingly salty and buttery, and needs little adulteration. But! If you happen to be feeling adulteratey, and indeed, have someone to impress (simply wanting to impress yourself is an extremely valid option here by the way) then these pancakes are both easy yet spectacular, which is one of my favourite combinations in a recipe. Another case of Well Done, Brain! on presenting me with an idea that actually works.

Speaking of me, as I said it’s my birthday coming up and I am like, flustered to say the least. Every year I get all like, what am I doing? What twenty things have I achieved since lunch? Who am I? Where do you come from, where do you go? Where do you come from, dated pop culture reference? Both my best friends are extremely out of town on the day and a google search for “what to do on your birthday alone” is all like, “take a trip! discover a museum!” which is like, all well and good if you don’t live in a tiny city and have 40 cents in your savings account. I am, however, working on some kind of scheme to make the day amazing and am also trying to be nice to myself about all the existentialism stuff, I mean: the world is awful, American politicians are out of control, the bees are dying, so just existing day to day is an excellent achievement. And if that sounded convincing, maybe I can believe it too. (On the other hand: oh god my birthday is coming and I’m the only person who ever had a birthday ever.)

Anyway! If delicious pancakes are very your thing, you may also want to consider my blog post about Nigella’s American Breakfast Pancakes, or Johnnycakes (like cornbread in pancake form), or my recipe for Lemonade Pancakes with Strawberry Sauce.

title from: tearjerker-era Jewel, You Were Meant For Me.

Rina Sawayama, Cyber Stockholm Syndrome. I got introduced to this song by the reliably reliable Martyn Pepperell and guys it’s amazing, like, euphoric.

next time: I plan on having a more mellow time of it. Also the weather is starting to get absolutely freezing so maybe something like…..broth-y? Slow-cooked? Vaguely warmed through?

2 thoughts on “i got my eggs i got my pancakes too, i got my maple syrup, everything but you”