Ever feel like you’ve lost a part of yourself? Well, I went to sleep on Monday morning in a dentist chair and woke up having lost three wisdom teeth, to be specific. Two of which were total normies, straight up and down and toothy looking, and one massively challenging one (according to the dentist who was extremely proud of themselves for getting through it and I was like yeah, great, for you) whose roots appeared to be doing a leg pop like you see in romantic comedies where a man kisses a woman. Trust me to have a whimsical damn wisdom tooth.

Fittingly, when I got there I didn’t realise that I had to arrive half an hour early if I wanted to be sedated. Yes, there was a form that I signed, but I didn’t like, read it or anything. When it became clear that I was about to get hysterical, they just gave me the sedative anyway. Afterwards Kate heroically came and shuffled a dribbling and confused me out into the street, and Matt picked us up and drove us to her house. I was strapped into the backseat and immediately fell asleep, and next time they turned around to check on me I was keeled over sideways but still strapped in, my head lolling with every slight bump on the road and a trail of blood running out of my mouth. When I fiiiiinally came to, I found this story extremely amusing. Me, the zombie in the backseat, they in the front pretending everything is normal to anyone else passing by and indeed, to each other.

Anyway, to the shock of no one, it’s been nonstop soft food since then. I was taken extremely good care of at Kate and Jason’s house – Matt bought me a jumbo pack of mini popsicles, I was made the most beautiful nourishing vegetable soup, I was given a gigantic tub of KFC potato and gravy all for myself, Ariel the cat repeatedly curled up on the bed with me while I worked my way through the ludicrous-even-for-PLL final season of Pretty Little Liars and Ghost the dog provided extremely good snugs, once he worked out that I was not going to be able to play our usual game of “I’ll chase you and then you chase me” and got over his subsequent passive-aggressive ennui.

I’m back at work now, which is good because I missed it so much – however I’m still eating in a very tentative manner. And I’ve been literally having lucid dreams about crunchy, chewy food. So I was like, what can I make myself that will be so damn seductively delicious and wonderful that I won’t even care that the texture is aggressively uniform and uninterrupted by the slightest bit of, well, texture.

Enter burrata: a cheese that’s extremely exciting even by cheese itself’s standards. I would describe it as a parcel, made of stretched out soft mozzarella, encasing fresh cream and cheese curd off-cuts. It’s a way of using up leftover bits and pieces during the cheese-making process but is entirely wonderful in its own right. I read the words “burrata mousse” briefly a few days back in some companion book to a blender (it’s a boring story, but I feel like giving credit where it’s due) and was like, whatever that is, I NEED TO MAKE IT. For contrast and vitamin content I decided to pair it with some bright orange butternut squash mash – you could of course use kumara or pumpkin instead but I love how easily butternut turns soft in the oven, and its gentle sweetness of flavour. 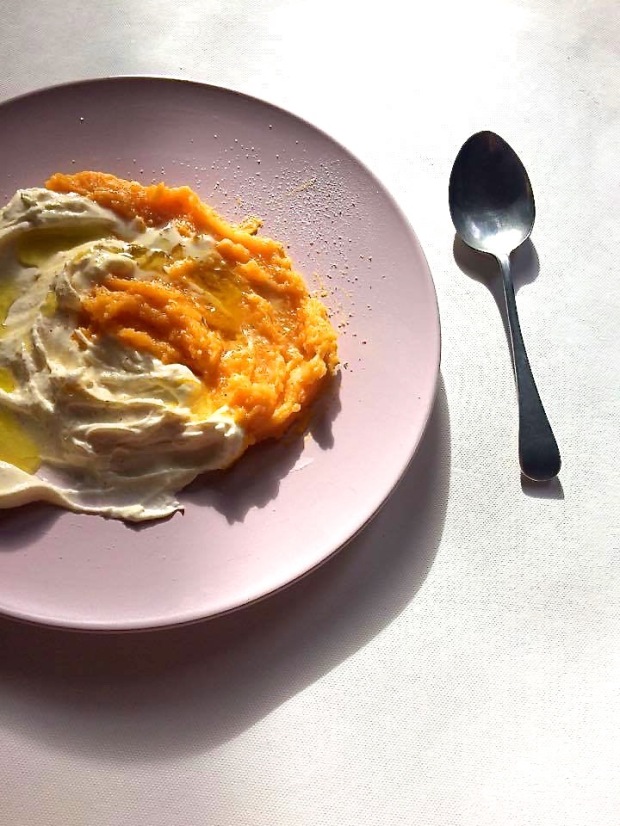 You don’t have to have these things together by the way – if my tender mouth was more up for it I’d definitely serve the burrata mousse sprinkled with za’atar (a stunning mix of sumac, toasted sesame seeds and dried thyme) or red chilli flakes or some kind of toasted nut situation, and I’d spread it thickly on chewy flatbreads or crunchy sourdough or…anyway, I’ll stop there before I get too flustered. The mashed butternut of course can also be served as a side alongside literally anything. But as is, and considering my limited options, it was an immensely delicious time – the impossibly creamy, silky, ever-so-slightly tangy burrata mousse against the plush, mellow butternut. I would’ve licked the plate clean if it didn’t hurt to open my mouth that wide.

And of course, both components are very, very easy to make.

a recipe by myself. Makes enough for one with solid leftovers.

Set your oven to 240C/450F. Wrap the butternut snugly in tinfoil and place it, cut side up, in the oven and just leave it there for about 40 minutes, or until you can stick a knife in through the tinfoil and it just slides right in without the slightest bit of resistance.

Meanwhile, drain the burrata and pop it in a high speed blender, or a food processor (just be prepared to blend it a bit longer if you’re using the latter.) Spoon in the mascarpone and squeeze in the juice of the lime. Blitz the heck out of it until it’s a smooth, smooth, creamy and thick mixture. Add plenty of sea salt, and spatula into a container or whatever and refrigerate till you need it.

Carefully lift the tinfoil from the cut side of the butternut and scoop out the waiting orange flesh – I just spooned it directly into a container so that I could store anything I wasn’t going to be eating right away – and mash in as much butter as you like with the back of a fork. Or, if you want to make it dairy free, use extra virgin olive oil. Grate over a smattering of fresh nutmeg. I didn’t want to waste any of the butternut so scooped up all the stuff clinging to the seeds and pushed them through a sieve, which created some extra cleaning up but – minimal waste. Once you’re quite sure you’ve fleeced the butternut of its goods, just wrap up the remaining shell and seeds in the tinfoil and bin the lot. Easy! No dishes.

Spread as much butternut as you fancy and as much mousse as you fancy onto a plate, or spoon them into a bowl, or WHATEVER, and sprinkle over more sea salt. Drizzle olive oil across the mousse, and then tuck in.

By the way, if you can’t find burrata – it’s usually at Moore Wilson but otherwise hard to come by – try a block of soft feta or some buffalo mozzarella for a similar effect. Similarly, feel free to use lemon juice instead of lime in the mousse – I just wanted that extreme acid sharpness puncturing the luscious richness of the mascarpone and cheese. Oh, and! I took the leftover butternut squash to work and thinned it down with a little stock and cream in a saucepan and it made an excellent, near-instant, soup. Which is of course, one of the other three things I can eat.

My teeth were not all I lost this week! In a series of events extremely typical of me, I broke the SD card for my camera. So on the day that I made this recipe – literally while the butternut was in the oven – I dashed out and bought myself a new card. I took nice photos. I then put the SD card in my pocket and took my laptop out to go blog at a cafe somewhere. The SD card had disappeared. Luckily I’d taken some photos on my phone, which are what you see here, but like, agh. This is so extremely par for the course for me – pick something up, it disappears into thin air – when I was a teenager and still kept a diary I had a running list of things that I’d misplaced/made disappear somehow, because that’s how often it happened. Unfortunately doctors can’t prescribe antibiotics for that affliction.

So in lieu of further photos of my food, please enjoy instead this photo of Ariel the cat being a total Vermeer babe in the sunlight, shortly before sitting directly on top of my laptop keyboard in the middle of the penultimate episode of Pretty Little Liars and acting extremely confused as to why I wanted her to move.

the girl with the purrrrl earring

The Mojo Brothers, Killing Floor. Not as far as I can tell, a cover of the Howlin’ Wolf song, although their vibes are not dissimilar. Anyway this song was playing during a scene in Pretty Little Liars which took place in a diner and was so weird and awesomely Twin Peaksy and no matter how stupid this show became and how many harmful tropes it doubled down on instead of skewering, I can’t deny that it’s been a huge part of my life for the last few years since I first discovered it. Also, good song.

next time: I really hope I’ll be able to have more of a variety of textures by the next time I post. At this point I’m craving crunchy food so much that it’ll probably just be like, here’s a recipe for a bowl of gravel for you.