I’ve talked a whole lot on here about how unskilled I am at sleeping. In a pink hardback baby book charting my first few months of existence, there’s a passage in my mother’s neat handwriting that tells – from my freshly birthed point of view – about how “I seem to require less sleep than everyone else” and “have already cried a lifetime’s worth of tears”. How completely prescient! Not that I have a ruthlessly raging case of colic as an excuse these days!

As I’ve also recounted here, my ADHD superpowers (having good ideas, absolutely sucking at every other aspect of life) came into play one night when I had trouble sleeping, and blessed me with this concept: what if I took thinly peeled slices of potato and wrapped them around other food and then roasted it so that the potato went all crisp and golden? (Thus neatly encapsulating three of the overarching themes of this blog: I never sleep, I was a small jerk of a child, with great mental health issues comes tiny, tiny kickbacks in the field of creativity.)

I figured this simply had to work, and wanted to try it with the new season’s asparagus. Being extremely pre-payday I had pretty much no money in my bank account, but after fossicking like a tenacious raccoon in all my pockets and the dark corners of my tote bag, I found enough coins to go down to the Cuba Street Fruit Mart. I purchased 1 (one) potato, and a handful of green beans, since asparagus isn’t actually out yet, handed over my pile of carefully counted out twenty cent coins, and went home to make my sleepless dreams a reality.

Guys, this was like...unreal. SO delicious. I could not be more enraptured with myself. Getting on a roll with achieving satisfactory lengths of peeled potato strips takes some work, but any extra bits can be roasted alongside the beans to be snacked upon leisurely (I recommend one of those peelers that’s kind of V shaped as opposed to a regular one.) What you end up with is slightly scorched beans, the oven’s heat giving them a kind of caramelised nutty juiciness (which is the worst thing I’ve ever written) encased in, essentially, a big kettle chip. The fried golden crunchiness of the potato against the beans is superb. I smashed some basil leaves into rock salt with a pestle and mortar just to point up the green taste of the beans, but just regular sea salt with chopped up basil or just salt on its own would be absolutely fine.

I feel like this would make an ideal starter for a dinner party, or you could make heaps and serve them with drinks. I guess they could also act as a fancy side for some kind of larger dish. They’re also vegan AF which is like, nice!

Set your oven to about as high as it will go – this is usually around 240C/480F. Pour some olive oil into a shallow roasting tray – the shallower the tray, the less oil you need to use, but whatever – so that it’s generously slicked. This is not a time to hold back. Place the tray in the oven so the oil heats up while you get on with preparing the ingredients themselves.

Peel the skin from the potato (keep it to make vegetable stock or something if you’re virtuous) and then carefully peel long strips of potato from it. I found it easier to go lengthwise, and it took a few goes, but it gets easier, and any scraps can be thrown in with the beans and roasted till crisp for a delightful snack, so no harm done. Wrap the beans, in little bundles of three, with a long strip of potato (as per the picture) and sit them with the tail end tucked underneath. Generally potatoes have their own natural glueyness so you don’t have to worry about them unravelling wildly and flying about the room like a pulled out tape measure.

Place them carefully in the tray of hot oil, and roast for roughly twenty minutes, turning halfway through. However, you mostly want to go by eye here – when the beans look scorched and the potato wrapping is getting golden is when you want to turn them. At this point, add any other peelings and scraps of the remaining potato to the tray – seriously, they’ll turn into kettle chips and taste amazing, plus what else are you going to do with that remaining potato?

In a pestle and mortar, bash the salt and basil leaves till they form a deeply green dust. If you don’t have this implement, just roughly chop the basil and sprinkle it and some salt over the finished beans.

Remove the wrapped beans to a plate when you’re quite satisfied with their done-ness, sprinkle over some salt, and eat em. The remaining scraps are particularly good with some smoked paprika and the remaining basil salt.

I roasted strips and scraps of the remaining potato and then sprinkled them with the remaining basil salt and some smoked paprika which was also ravishingly good. From one potato, sprang forth so much joy. I’m keen as to try this potato wrapped method on other foods – the asparagus of my initial intentions, halloumi, already-roasted beetroot, big red chiles stuffed with feta, maybe some kind of beef…thing…and I was even like, could I wrap potato in potato? Would that work? Am I the greatest genius whomst ever lived?

Well, no: another insomnia-idea was that I thought it’d be cool to roast pears stuffed with chocolate and then dip them in cake batter and bake them, so that they’d be encased in a layer of cake. The cake batter slid off and I ended up with two pears stuck in a large biscuit, which still tasted essentially fine, but was not something I’d recreate in a massive hurry. You can’t win em all, most of the time you can’t even win anything and in fact end up losing dramatically, so I’m quite content with this progression of events.

Back to the lack of sleep thing, before you all start a letter-writing campaign of great concern to your local government about my wellbeing or something, it’s not like I’m not working on it, and I do have naps during the day. I have a prescription for these amazing sleeping pills, I just keep forgetting to go get it filled out. I’ve got all the meditation and rain sounds in the world on YouTube, magnesium tablets, chamomile tea, yoga, you name it. Actually nothing makes me want to drop into a stupor like a gigantic meal of carbohydrates, so maybe potatoes are the way forward. Whether I’m sleepless and thinking about them or sleeping because of them: they are so good. 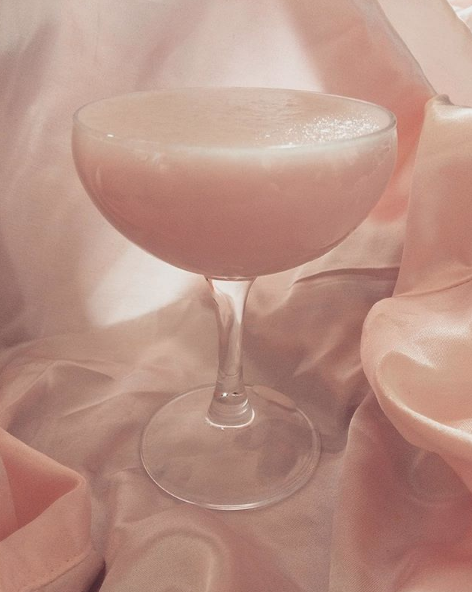 A callback for the fans; in my last post I went on a rose-coloured rant about Millennial Pink, and I decided to make a cocktail embodying the colour as well. Plantation Barbados 2000 rum, Peychaud’s bitters, Aperol, thyme bitters, sugar and cream, makes for an alluringly-hued and impressively tasty drink. Just in case you thought I was anything less than totally exhaustingly all-or-nothing.

Finally, if you like Things With Potatoes, you might consider reading some of my other blog posts, including recipes for Halloumi and Hash Brown Potatoes; Potato Dominoes; or a Fried Potato Toastie.

title from: one of the greatest pop songs of all time, Love Machine by Girls Aloud. Also worth listening to is the ebullient Arctic Monkeys cover.

next time: I made pulled jackfruit and I’m effing obsessed with it.