There’s this movie called Wet Hot America Summer, released in the summer of 2001 to very little attention or acclaim. It’s become notable in the ensuing years for how immensely high profile most of the ensemble cast has gone on to become (Paul Rudd, Amy Poehler, Bradley Cooper, Elizabeth Banks) and the deliciousness of seeing them in their career infancy. People also finally started to appreciate how stupidly funny it is, and it gathered a lot of steam in a cult-hit kind of way. Anyway, I really love it and it’s one of those movies where whatever is happening in your life, it feels like nothing bad can happen when you’re watching it. I have similar feelings about the One Direction movie.

There’s also this bit in the movie where one of the characters tells the girl that he has a crush on, “I’ve really grown up a lot since before dinner when we last talked”. Due to my live-life-ten-seconds-at-a-time haphazardly whimsical and exhausting persona I have always related to this moment since I first encountered it, but I am like, really feeling it currently.

actual footage of me

As I said in my last blog post, I’ve started on some new medication for my anxiety and whatnot. It’s been a trip. My doctor was all, there might be some weird side effects, and I was all, ma’am, respectfully, my whole LIFE is a side effect, I’m just keen to try something new. There’s some massively positive stuff, the most of which is that I’m now so UNNERVINGLY calm in comparison to the spiky, nervous tumbleweed of buzzing wires and thorny branches and barbed wire that I was hitherto rolling along in the guise of. I mean, I’m still me, that can’t be helped, but I feel much more able to process information quietly, make decisions, and anticipate things without a constant sound of wasps in my ears and sirens in my stomach.  I feel more able to stand my ground whereas previously I would’ve just panicked. It’s not perfect, but it’s really something observing myself being this person. So yeah, I’ve really grown up a lot since before dinner when we last talked.

Bad side effects are some morning sluggishness and some nighttime head-spins, but in the middle I’m afforded at least a few hours of intense, clear-eyed activity. Which is how, on Monday morning, I found myself making this entire damn pizza from scratch and then eating it within the space of an hour and a half. 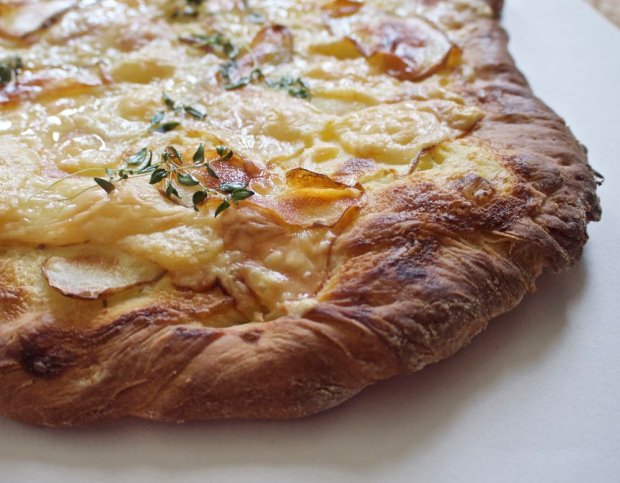 I’ve had potato pizza on my culinary to-do list after having it at brunch at Loretta with a friend a while back; theirs had darkly beautiful purple potato slices and I could only find, at best, red-skinned potatoes, but no harm done. On a whim I decided to use fresh yeast instead of the usual instant dried stuff, and I’m a fan! Having not tried this particular recipe, which I made up on the spot, with anything other than fresh yeast, I couldn’t tell you precisely how it’s different to the dried kind but you should know that it’s very little effort, requires barely any kneading or rising time and tastes magical.

Potatoes on pizza is a classic Italian combination, and there’s nothing quite so comforting as carb on carb. The dough is tender and puffy, the potatoes are sliced so thin that they’re almost translucent and so they crisp up quickly under the oven’s heat. I draped slices of nutty, sweet Emmentaler over the pizza, but you could definitely use Gruyere if you can stomach the price. A schmeer of rich, creamy mascarpone with mustard, chilli, and cider vinegar spikes the bland calmness of the other ingredients and the resiny pungency of thyme is just, I don’t know, I really love thyme and like putting it on everything.

Scared though you may be of tackling any kind of yeasted dough from scratch, this one comes together with a few brief stirs, prods, and a rise time so fast you don’t even have to have a TV show cued up to watch while you wait. I suppose there’s more olive oil in it than you might normally expect but I feel that it adds to the soft, puffy texture and the flavour. Plus, you make enough dough for some pizza now, and some pizza for future-you. Planning for the future? ME? Whomst even am I?

the on top stuff:

While this is happening, mix the mascarpone, mustard, chilli oil, and cider vinegar in a small bowl. Use a vegetable peeler to make thin, thin slices out of the potato. You won’t need the whole thing, but just throw the remaining potato in with the pizza as it’s cooking and then eat it or something. Sit the potato slices in a bowl of cold water. This will bring out some of the starches and make it roast quicker.

Cut the dough in half and place the remaining dough in an airtight container in the fridge to use another time. Place the dough on either a nonstick silicon baking mat or a sheet of baking paper and using your hands, gently push the dough out into a rough rectangle shape. If it seems like it won’t stretch as far as you want, let it rest for a few minutes and continue to shape it.

Spread the mascarpone across the pizza base. Drain the potato slices and pat them dry with a clean tea towel. Layer the potato and cheese over the mascarpone and finally sprinkle with a little more sea salt. Leave to sit for ten minutes.

Carefully lift the baking sheet or piece of paper and place it on the hot oven tray or pizza stone. Bake for 15 – 20 minutes, or until the cheese is golden brown and the edges are crisp. Scatter with thyme leaves before eating.

Pizza is so unfathomable, in that if you cut this rectangle into eight large squares then you could give that to eight people, but you could also QUITE comfortably eat at least half of this yourself and then reheat the other half later, or share it between two people but still be kind of hungry? It’s this strange loaves-and-fishes alchemy that I’ll never understand. Unsurprisingly though, I was in the half-now-for-me, half-now-for-later category of consumers. However you slice it, this pizza is stupidly delicious.

If you’re on a DIY dough buzz, may I suggest some further reading from my archives, such as no-knead Challah, Fougasse Bread, or Nigella’s Maple Walnut Bread.

Till next time…I guess this is growing up.

SO another weird side effect of the medication is that I’m feeling music on a hellaciously deep level, like I was listening to Meadowlark as sung by Liz Calloway the other day while walking down the street and nearly threw up and fell over sideways from the intensity of it all. I’ve always had the proclivity to y’know, cry at songs and feel like they were written for me and me alone, but this is next level.

I’ve been hitting the Les Mis pretty hard and folks, I’ve never felt more pumped for 1800s Frenchy War Stuff in my life. To pluck but one example from the air, literally every time I watch this clip from the 2014 Tony awards I genuinely cry and get full body shivers (particularly at the revoltingly beautiful face of Ramin Karimloo and Kyle Scatliffe’s monumental voice and Will Swenson’s appealingly nasal Javert) and I’ve been watching it a LOT.

Also been seriously feeling the Meat Puppets lately. Lake of Fire, famously covered by Nirvana, is so sludgy and about to topple over with its own heaviness, but then you’ve got like, Up On The Sun or Aurora Borealis which are just really, really nice grunge.

next time: IT’S DECEMBER! What? Whomst? How? That’s all I have to say about THAT.