On the one hand, I absolutely hate tough love and would much rather live in some kind of constructed reality where I’m relentlessly coddled and never need face up to hard truths, on the other hand if I was on top of my game at any given areas of my life, tough love and hard truths wouldn’t need to be a constant burden to be avoided, yeah? Anyway to my great aggrievement, I had to tough-love myself and acknowledge that there is just no feasible way that the ticket to Lana Del Rey’s concert in Melbourne at the end of this month that I bought for myself in a burst of hopefulness earlier this year is going to get used by me, not in this economy. (Although I have best friend and economy expert Kim to thank for getting me to this point, she was essentially like “have you decided what you’re doing” and I was like “I’ve decided to flail endlessly” and she was like “what are your incoming and outgoing funds” and I was like “lol as if I’m supposed to know that kind of thing” and then I kind of investigated and she was like “well there’s your answer.”)

Part of the reason that it was so hard to give up the idea that some eleventh-hour miracle might happen is that I haven’t left the country in six entire years, partly because of life getting in the way of life, mostly because of the old incoming-outgoing paradox, and while traveling for the purpose of pleasure in no way makes you a more interesting or worthy person, I was like, I’m an adult, aren’t I? Why can I not perform this small display of adulthood in the manner of so many other adults? But also being kind to myself in the face of defeat but also not pinning my entire hopes and worth upon one single star when there’s a whole galaxy out there waiting, is also something of a display of adulthood, I GUESS.  (Related: if someone wants to purchase one GA ticket to Lana Del Rey’s concert in Melbourne on 31 March kindly get in touch.)

Meanwhile, I made some ice cream. I would regard ice cream as easily one of my favourite foods; as I’ve said before there’s something about its creamy frozen-ness that is a perfect blank canvas upon which to paint flavour, I love its billowing softness, its glacial richness, its melting sweetness, its, um…I just really like ice cream. My love for ice cream possibly exceeds my ability to talk about ice cream reverently, and you know I store vast reserves of reverence within my brain, like a camel of overexcitement.

Initially when I started making ice cream, well over ten years ago now, I would either do the traditional method – gently cooking egg yolks and cream into a rich custard – or Nigella’s swift method, literally just sugared whipped cream – but my current favourite base recipe that I find it impossible to extricate myself from because it’s so easy and makes perfect ice cream every time, is a mixture of condensed milk and cream. So this time around my idea was tahini and honey – tahini is a thick, rich paste of ground sesame seeds, with a really wonderful toasty nutty flavour and the texture of peanut butter. Even if you’ve never bought any you’ve probably had it before as it’s an ingredient in hummus. 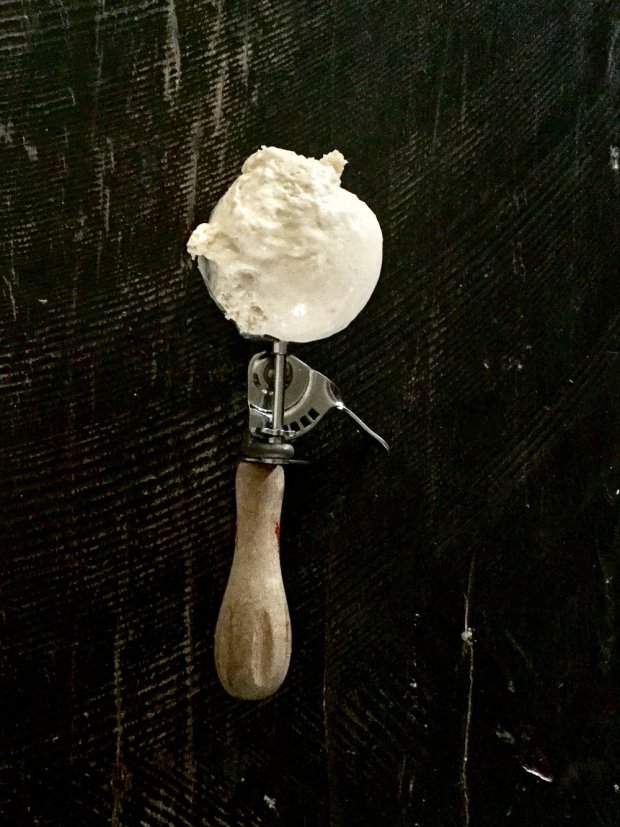 This makes for a really lovely, slightly unusual flavoured ice cream – there’s an almost savoury quality to all that sesame, but its toasty nuttiness, and I’m sorry to re-use adjectives but there’s only so many bloody ways to say it – is just wonderful against the thick, soft, creamy backdrop of the ice cream. The honey adds gentle sweetness and all in all it’s a very mellow, mild ice cream, the sort that would be ideal under lots of toppings – some toasted pine nuts or walnuts, a further drizzle of sticky, slow-moving honey, some dark, dark melted chocolate, or as I did, a scattering of sesame seeds, for obvious reasons.

Stir the butter, honey, and tahini together in a saucepan over a low heat until the butter is melted and it’s juuuust at the ghost of a simmer, like, remove it from the heat just when bubbles start to form on the surface. Stir in the condensed milk and a decent pinch of sea salt. Whisk the cream in a large bowl till it’s just thickened but not whipped – thick enough to be kind of billowy and bordering-on-solid but not actually in stiff peaks, you know? Mix the cream into the tahini honey mixture any way you like – I poured half the cream into the tahini and whisked it and then poured that into the remaining whisked cream and folded it together but honestly literally, whatever.

Spatula all this into a container of roughly 1 litre and freeze overnight or until solid.

For me the most difficult part making of ice cream is probably waiting around for it to freeze solid enough to be eaten, other than that hardship I assure you that this recipe, as I hope for all my ice cream recipes to be, is really pretty easy and requires nothing more than a spoon, a pan, and a freezer-safe container. Something about the density of the sweetened condensed milk (or it could be any other scientific reason beyond my comprehension, the point is, it works) prevents any ice crystals from forming, meaning all you have to do is bung the mixture in the freezer and leave it alone, without any stirring or blending or further agitation until the blissful moment of actually eating it.

Gloomily accepting my lot in life aside, I did have a high-achieving week: I flew up home to Waiuku to spend two nights with my parents, catch up with an awful lot of family all at once, be roundly ignored by the cats, and pick up some total clothing gems at the local op shop, before scooting briefly up to Auckland to see Fall Out Boy in concert, the result of a ticket I purchased a long time ago and completely forgot about until quite recently. It was lovely to go home and see everyone, and the concert itself was just wonderful, such naked earnestness (luckily the nudity remained metaphorical only), such whoa-oh-ohs, such specificity of lyrics that it’s like, how dare you.  Just in case you thought I was exaggerating about well, literally anything earlier, the only way I was able to spatula myself on a mere visit to Auckland was with financial assistance from my parents for the flights, but one out of two concerts in one month isn’t bad, I guess. And if nothing else there’s no better music to listen to when you’re feeling sad about Lana Del Rey than Lana Del Rey, she is to sad moods what like, salt is to tomatoes.

And if nothing else, I did manage to finally get my application for my passport sent off, including an injurously bad photo that I refuse to acknowledge is an accurate representation of me in the slightest, considering my current passport expired in 2014 (I’m literally grinning in the photo inside it, can’t do that anymore) I’m mildly proud of myself.

While we’re talking ice cream I have any number of other recipes to recommend to you if you’re interested, but instead I offer you some recipes with which to use the rest of the jar of tahini – such as Green Tea Soba Noodles with Tahini Satay Sauce; Ottolenghi’s Roasted Butternut with Lime, Yoghurt Tahini Sauce, and Chilli; or this truly incredible Halvah Shortbread.

title from: Carpal Tunnel of Love, by Fall Out Boy, as I am nothing if not topical.

A nice thing about working at Laundry bar is that there’s regularly DJ sets to bop to, and the very last song on Saturday night just got me right in the heart, it was a remix of Beth Orton’s song Central Reservation and it just filled me with euphoria, which, at the tail end of a long shift is like, a cool feeling. I haven’t been able to find the exact version that I heard but this one will do in the meantime.

Another song that stopped me in my tracks at work was when one of the DJ’s just casually dared to drop Rez by Underworld, like, did they not realize that when this song is playing I am capable of naught but standing with my eyes closed and waving my arms around in what I hope is roughly a graceful fashion, interrupted only by some jumping up and down with little regard for objects or people around me? This song is just magical.

Deftones, My Own Summer. Respectfully, shove it.

next time: Well, I still have half a jar of tahini left.

3 thoughts on “it was ice cream headaches and sweet avalanche”