I’m not one for the long game, I like a shortcut, me. This is an attitude that makes me highly susceptible to pyramid schemes and not susceptible to actually achieving anything, so apropos of this, I was having an idle wander around Yan’s supermarket the other day and saw a packet of charcoal noodles, upon which the only words that I understood other than “charcoal noodles” were “health benefits”, and I was like, these noodles are going to solve all my problems right now, I just know it. And so I bought them.

As I said in my last blog post I’ve been having incredibly strong cravings for sugar lately – my chocolate bar budget is through the roof – so I was determined to make myself at least one aggressively savoury thing to eat before, I don’t know, the year is out. These noodle presented themselves at precisely the right moment. To go with them I made edamame beans, lightly coated in spiced cornflour and deeply fried in oil till crispy, a salty-sweet-sour dressing, and some chopped roasted nuts. While I have no idea what the health benefits of these noodles are because I couldn’t read the language on the package, I trust implicitly the fact that there were health benefits, but if all you can find is regular noodles then there’s no harm done, I’m sure. 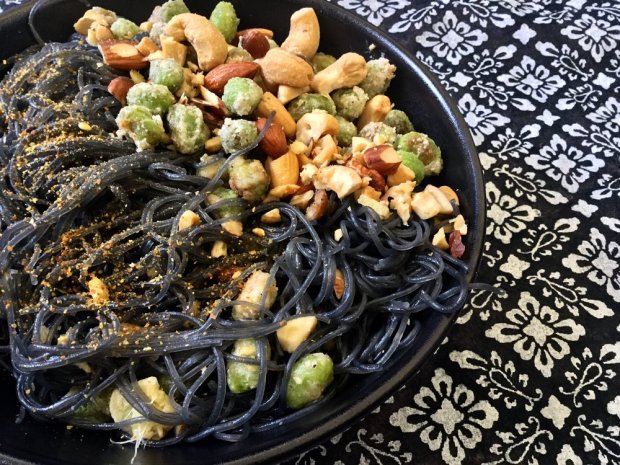 This is honestly barely a recipe and definitely doesn’t lean towards any particular region or have any claim to authenticity, but it is really, really nice: slippery noodles, crunchy, nutty fried beans, the balanced dressing with its salty, sour, hot and sweet notes in equal measure, and then the further crunch of the roasted nuts. I am such a huge fan of edamame beans, with their gorgeous emerald color, and when you fry them up they get this almost pistachio-like nuttiness going on. This recipe is incredibly easy to throw together, even with some semi-deep frying, and surprisingly filling. And it’s savoury as hell.

First, get your noodles sorted: place them in a bowl, and cover with water from a freshly boiled kettle. Once they’re fully softened, drain them in a sieve and set aside.

To make the dressing, whisk together the sesame oil, vinegar, soy sauce, chili sauce and sugar, then stir in the ginger. Pour over the drained noodles.

Run the edamame beans under cold water in a sieve if they’re super frozen, just to remove any extraneous ice crystals. Mix the cornflour, five spice powder, and a pinch each of salt and pepper in a bowl and throw the beans in. Heat about an inch of oil in a pan. Toss the beans in the cornflour mix and once the oil is hot, carefully spoon the beans into the oil in batches and fry till crisp and slightly browned.

To serve, put the dressed noodles into a bowl, and pile on the edamame. Roughly chop the roasted nuts and sprinkle them over along with the chili flakes, if you wish.

Meanwhile, I cannot believe it’s April already; who let this happen? It’s less than ten days till my birthday which means I’m extremely trying to not have some kind of where-am-I-what-am-I-doing-what-am-I-like existential breakdown, but also I’m like Laura, you’ve had several birthdays now, there’s no need to be surprised by the fact that another one is rolling around. Either way it’s definitely Aries season, which means watch out; I’m more powerful and at least twice as annoying than I would be at any other time.

If you’re on a noodle buzz, may I recommend some further reading: soba noodles with steamed vegetables and hot and sour dressing; Ottolenghi’s glass noodles with edamame beans; or pepper-crusted tuna with soba noodles and peanut sauce.

title from:  Limp Bizkit and Method Man, N2Gether. Yes, Limp Bizkit are objectively terrible, but for a good decent while there I absolutely loved them and honestly, this song still bangs. Is it mostly because of Method Man’s presence? Yeah, probably. But can you deny your nu-metal roots? No you cannot.

Marty Robinson, Big Iron. There’s something about Marty Robinson and his gunfire ballads, I find them so comforting!

Wildchild, Renegade Master, the Fatboy Slim remix. I am SUCH a fan of big beat, like the bigger and stupider the better. This song pops up quite often at work when we’ve got DJs on and no matter how tired I am it always makes me rise up from my grave and jump around.

Laurie Beechman, Memory  I know Memory from Cats is like the ultimate overdone overworked musical theatre song in existence but damn it, it’s beautiful, and the late Laurie Beechman singing it absolutely RUINS me, like, don’t click through and listen to this if you have to do literally anything at all of import afterwards, you’ll need a lie down, I assure you.

Next time:  I intend to have like, slightly more energy this time, promise!!