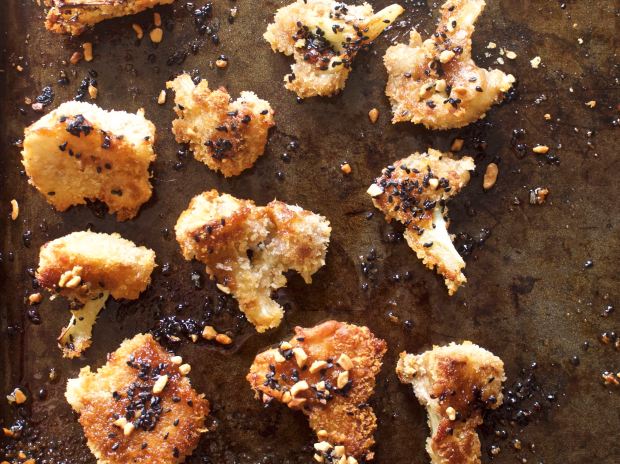 One week in to the return of Hungry and Frozen and I was already a day late, a buck short, on my self-appointed schedule that is; however I am undeterred and gaspingly but enthusiastically dragged myself over the finish line. Much like episode two of Frasier which was essentially a retread of the pilot; you may notice some common themes between this and the last blog post because to be honest I’m still finding my feet with this whole operating-on-a-routine thing, but I can tell you something for free: the recipe this week is absolutely BANGING.

I cannot wait to write one of these posts where I’ve comfortably settled into a routine and don’t feel like I’m racing against the clock like I’m trying to defuse a bomb in the manner of a character in Mission Impossible, or, say, Mission Impossible 2 (I more or less just woke up and have to go to work again soon and my battery on my laptop was ticking downwards rapidly in direct proportion to my heartbeat racing faster before I remembered that I was sitting in bed and could in fact lean over and plug it in to the charger.) But nevertheless, I’m pleased with myself for actually making a recipe more or less on time which is not only delicious, it also tastes incredible.

Related to this mood, I downloaded this horoscope app called costar which told me the following: “Exhaustion is not always a bad thing, sometimes it is the good result of hard work. Keep asserting yourself, you’re doing fine.” Sometimes the specificity is bordering on Black Mirror-level what-if-phones-are-bad horrifying (it literally told me to consider studying attachment theory) but I was like yes! I am tired and adequate! Thank you algorithm for truly seeing me.

Unlike me, cauliflower is really having its day in the sun, and has found itself mangled and extruded into all kinds of carb and meat replacements and dupes in the last few years. I’m not going to lie to you, while this recipe is something I devised myself, the concept of it stems from much scrolling through Pinterest and having people brightly insist that cauliflower can be made to taste exactly like chicken wings. Whatever, I love the taste of cauliflower as it is, particularly when massive amounts of heat are applied to it: its aggressive mildness becomes caramelised and nutty and just generally wonderful.

This recipe is all about texture – the crunch of peanuts and sesame seeds against the stickily crispy batter, which gives way to a creamily soft cauliflower interior. The combination of salty, sweet, oily and a touch of chilli heat makes it kind of addictively good, the eating equivalent of finding yourself scrolling through the same social media app on your phone and your computer at the same time. The method is not exactly fiddly, but there are a few steps and a lot of ingredients involved – the really important thing is to make sure the oven and the tray are really, really hot before you put the cauliflower in. And eat it right away: when left to sit for too long they go kind of soggy and soft, which is itself strangely beguiling, but not the real desired result.

But I happily ate the remainder of these sometime around 4.30am when I got in from work and in the way that cold leftovers eaten in the middle of the night often are, whether through actual merit or that Mallory Towers midnight feast illicit thrill elicited: they were still really good.

A recipe by myself, serves two as a snack but just, to state the obvious, make more if you want to feed more people.

half a head of cauliflower
olive oil

Firstly, set your oven to 240C/450F. Pour enough olive oil onto a large roasting dish to just coat the surface and put it in the oven to heat up too while you prepare the cauliflower.

Break the cauliflower into florets and cut them into smaller pieces, slicing through so you get decent surface area on each piece for the batter to cling to. Don’t stress about this step too much, you just need everything to be fairly small so it will cook quickly and evenly in the oven.

Mix the flour, spices, and water together in a small bowl to make an unappealing batter that if you’re anything like me you’ll be unable to stop yourself tasting anyway. Place the panko breadcrumbs in a bowl and dunk the cauliflower pieces first into the batter, then into the breadcrumbs. I find it easiest, cleaning-wise, to put a piece of baking paper down to sit the dunked cauliflower on until you’ve finished it all.

Transfer the cauliflower to the heated oven tray, in a single layer, and roast for ten to fifteen minutes. While they’re cooking, mix the hoisin sauce, vinegar, mustard and sesame oil together in a small bowl.

Return the tray to the oven for another five to ten minutes – keep an eye on it because you definitely want it a little scorched and browned but not burnt. At this point, remove from the oven and you finally get to eat it. 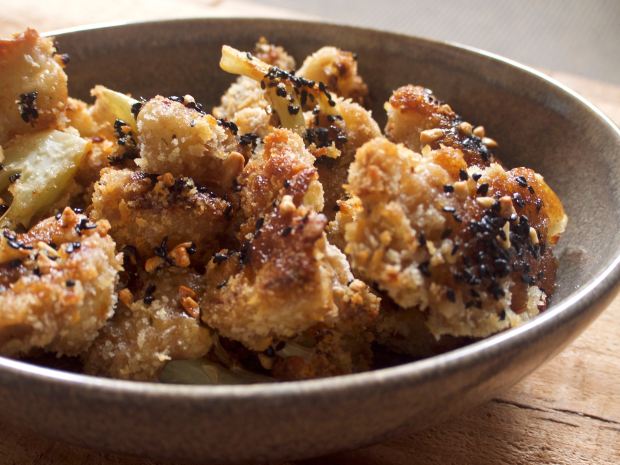 If this has stirred you aflame with a potent desire to like, cook more cauliflower, may I also suggest my other recipes such as Velvety Chilled Beetroot and Cauliflower Soup, Roasted Cauliflower with Almonds and Whole Spices, or, entirely demonstrably, Double Cauliflower Salad.

title from: The Birthday Party, Release the Bats. “My baby is alright, she doesn’t mind a bit of dirt.”

Linda Eder singing Man of La Mancha, from the 1965 Broadway musical of the same name, a song that was written for a male character but which was actually surely written and waiting for her to perform it. There’s this bit two minutes in where she starts just going off in flawless whistle register and she does this little eyebrow raise to show how easy it is and honestly, I didn’t think an expositional song about Don Quixote was going to floor me like this but here we find ourselves.

Skeeter Davis, The End of the World. This is just a perfect sad song.

Next time: I’m going away this weekend for best friend Kate’s birthday so I’m hopefully going to make at least contribute to at least one cute thing during that time!

PS sign up here to get my blog posts sent to your inbox before everyone else reads them on here like you’re some kind of VIP of a tired yet adequate club.