Over on my Frasier food blog I talk about tropes a lot – a trope is, loosely, a recurring theme or motif – and I feel like I’ve hit a vegan trope with this week’s recipe: tofu. Let us face it, there’s no food more generically symbolising the vegan life as a whole than tofu, (perhaps other than lentils) the implication being that in its meatless blandness it represents not only all that you are missing out on and have left behind but also the miserable and sepia-flavoured journey ahead that you’ve chosen. (There are those who say “how do you know someone is a vegan? Because they’ll tell you at any opportunity” and there are those who say that people pre-emptively berating vegans outweighs any levels of militance from the vegan camp, and then there’s me, and I say guess what: everyone has the capacity to be really annoying.) 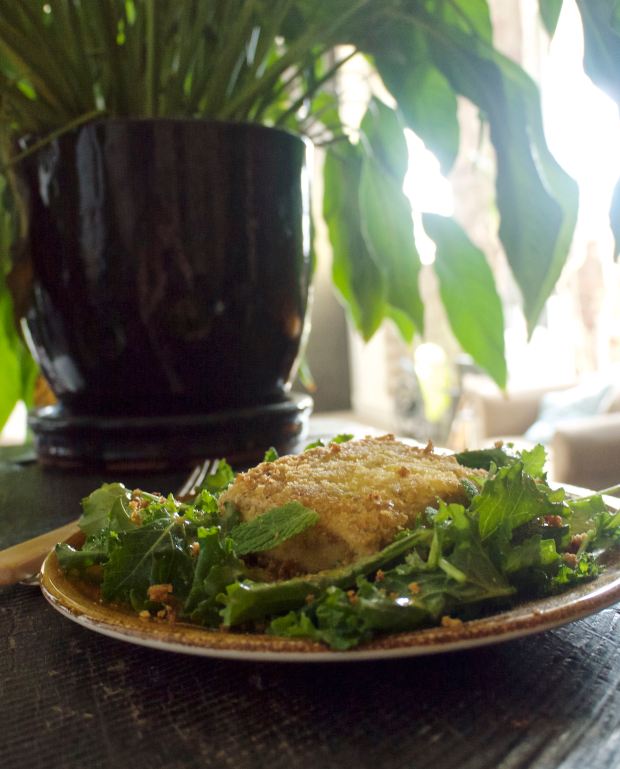 Rest assured, no one is forcing anyone to eat tofu. You can quite happily live your entire life without touching the stuff. I myself actually really like the taste of it – which is admittedly fortunate – and always have. It’s often said of tofu that peoples’ main mistake is not giving it enough flavour – but like, why would you want to make anything that doesn’t have flavour to it? If you cook something blandly, it’s going to be bland. A plainly-cooked chicken breast has no liveliness, it is at best tantamount to a dry flannel.

Anyway, if you are going to consume tofu, you might consider doing so in the form of this week’s recipe, since it’s monumentally delicious. I actually had the idea for the sauce first and worked backwards from there to fill in the blanks for how I could use it (other than just drinking the sauce in its entirety, I suppose) but it all worked so well that both the tofu and the sauce are the double-billing stars of the show.

The golden crust on the tofu is made from a glorious mixture of coconut, sunflower seeds and breadcrumbs – light, nutty, buttery, crunchy, with anything that doesn’t stick to the tofu toasted in the oven and scattered over your salad leaves. I’m all about contrast in texture and the intensely crisp exterior giving way to bouncingly tender interior is marvellous. And the sauce! How it shines! Wasabi has this particular, sharp, mustardy, sinus-scritching heat to it, which is balanced perfectly against the cool hit of mint, the sour, fresh lime, and the richness of the oil. All of which is then further tied together by the power of an entire bulb of garlic, roasted into mellow sweetness. The resolute mildness of the tofu is the ideal backdrop for all this action, but this sauce would be wonderful on pretty much anything, I imagine. If you don’t have wasabi or can’t find it then horseradish or indeed mustard would surely be a fine substitute, since all three are part of the same family.

Slice the very base off the garlic bulb – the knotty bit holding it all together – and wrap the garlic itself loosely in tinfoil and roast it for twenty minutes in a small dish that you’ve drizzled the two tablespoons of olive oil into.

While this is happening, slice the tofu in half horizontally so that you’ve got two flatter rectangles, and either reserve one of them for later or add some more coconut and sunflower seeds to your coating and make two.

In another small bowl, mix the cornflour with a tablespoon of cold water.

Remove the roasting dish from the oven and carefully lift the coated tofu into it, sitting it beside the garlic. Return to the oven for another ten minutes. Reserve any remaining breadcrumb mixture.

Once the ten minutes is up, turn the tofu over and remove the garlic. Put the tofu back in for another five to ten minutes.

Unwrap the garlic and carefully – it will be hot as hell – squeeze the garlic cloves from their paper casings into a small blender or food processor. Add the remaining sauce ingredients and blend it into a lime green sauce.

At this point – you’re almost there – remove the tofu to a serving plate, sitting it on a bed of salad leaves or kale or something and tip any remaining breadcrumbs into the roasting dish. Put the dish back into the oven for a minute or two until the breadcrumb mixture starts to brown and the scatter them over the salad, then pour over as much of the sauce as you want. Finally, eat. 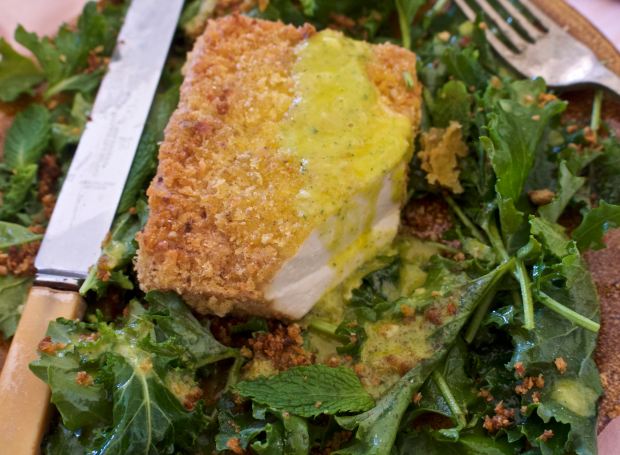 So my usual plan is to send these blog posts out on a Sunday night to all the email subscribers (and sign up here if you want this to be you) but instead on Sunday gone I was too hyped up watching the Khabib vs McGregor fight before work to write (reacting to my livestream cutting in and out alone provided ample adrenaline) and then after work I accidentally got on the go from having several birthday shots given to me (not my birthday, I might add, I was merely collateral damage.) Not drunk, but precisely enough consumed to immediately and heavily fall asleep when I got home instead of diligently writing as planned.

I don’t know if it was my addle-headedness either just in general or post-shots but no matter how hard I revised, this recipe came out sounding monstrously complicated. It’s literally just sticking some stuff in an oven and then sticking some stuff into other stuff and then sticking that in an oven and blending yet further stuff but trying to explain it was oddly difficult; should you have glanced over the recipe and felt a quickening in your heart at how many steps are involved rest assured it’s just 1000% me talking myself into a corner. This is easy as. And so cheerfully resigned to a life of tofu am I, that the next day I made myself some tofu scramble, for the express purpose of (a) writing about it on my next Frasier food blog post and (b) eating. For, you see, the only thing I’m even more cheerfully resigned to is a life of self-promotion.

title from: Loser, by Beck. This is one of those songs where it’s like wow, he really just…wrote those lyrics down….didn’t he…but then that recurring guitar lick is so good and the chorus so singalong-friendly that I’m like you know what, who cares, sing on about rabbits shaving their legs or whatever, sweet Beck. Also because I’m always worried that people won’t get the joke – on account of I often need stuff explained to me – tofu is…made of soy…hence this title.

Edwin Starr, 25 Miles He’s better known for the song War but I maintain that the “ah-ah-ah-ah-ah-ah-ah” bit in this song is honestly one of the greatest contributions ever bestowed upon the musical canon.

Fiona Apple, Hot Knife. “If I’m butter then he’s a hot knife” is such a perfect and simple metaphor to build this light, chatty and intoxicating song around.

Alice Coltrane, Om Rama. This song just drops you head-first into it and keeps it frenetically high-paced until the middle section where it dramatically changes tempo and gets all woozy and dreamy and just when you start to relax it speeds up again. I love this song so much.

Next time: GUESS WHAT, next time you read this my blog will have officially turned eleven years old, I don’t know quite what to cook to acknowledge this level of momentousness and indeed, welcome any thoughts and feelings you might have.