I admit, I held some concerns that this recipe was a little insubstantial, especially after the (a) pomp and (b) circumstance of the last blog post’s layer cake, but in a long long work week this felt, and was, manageable. On top of which, as I reasoned with myself: people always need dip. A pile of various crunch-adjacent foods and a bowl of something pliant into which to plunge them is 100% an ideal meal for me, there’s just something so abundant and yet casual, organised yet constraint-free about it.

And in case you were worried that it was all going to be too effortless, be assured that there are no less than two time-consuming steps involved in this, firstly the soaking of the sunflower seeds and then the roasting of the garlic. But nothing is required of you while both these things are happening! 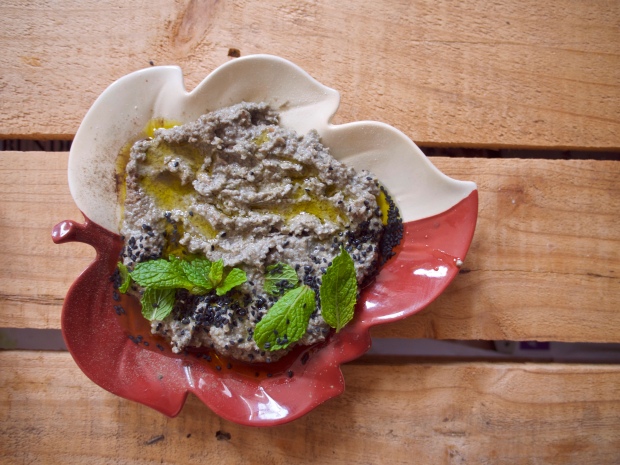 I found this recipe while scooting around online and as you can see, if you click through, my recipe here is quite directly influenced by it. I made some distinct changes though based on interest and availability: the two main ones being I toasted the sunflower seeds before soaking to intensify their flavour, and because I couldn’t find the required black garlic I used regular stuff instead. Naturally I was all, “I feel like this calls for an entire bulb of garlic” – I’m at the point where my perception of garlic has shifted so much that I’m probably going to start treating bulbs of garlic as though they’re individual cloves, but we’ll cross that pungent bridge when we come to it. Honestly though once you roast the hell out of garlic like I did here the flavour is so sweetly mellow, if anything I wanted more of it but appreciate that it would be somewhat ridiculous. 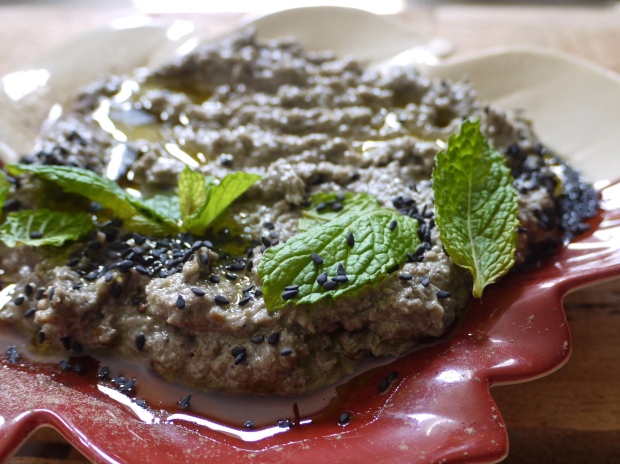 (I also appreciate that it’s wantonly wasteful to turn an oven on for half an hour just for one lone garlic bulb, indeed, with guilt in my heart I also made a loaf of Irish Soda Bread to bake at the same time. It turned out to be absolutely disgusting somehow, completely inedible and I had to remorsefully throw the entire thing in the bin, with the best of intentions creating even more waste. Lesson learned: blameless garlic deserves to take up space.)

This dip (I cannot bring myself to call it hummus as per the recipe it’s based on since it doesn’t contain chickpeas but I grant you: the texture is similar) is just wonderful, buttery and fulsome with an intense nuttiness, with the earthy cumin and sharp lime keeping it from being too formless. Using sunflower seeds as the base was a bit of a revelation for me – they give gorgeous creamy texture and substance and incredible flavour, and delightfully, they cost hardly anything. I happily and willingly ate a whole plateful of vegetables simply because I had this dip to drag them through: against the sweetness of carrots the lime and cumin really sang, while the richness of the olive oil was a magnificent pairing with the surprisingly buttery baby turnips.

A recipe inspired by this one

Toast the sunflower seeds in a dry saucepan (that is, no oil in it or anything) over a medium heat, stirring and keeping an eye on them till they’re all more or less lightly browned. Tip them into a bowl or small jug, cover with water and refrigerate for around six hours, or overnight if that’s easier.

At this point, set your oven to 180C/350F, wrap the garlic bulb loosely in tinfoil and pop it in the oven for about half an hour.

Now it can all come together: Drain the sunflower seeds and tip them into a high speed blender (or a regular food processor, the finished result won’t be quite as smooth though.) Remove the garlic from the tinfoil and carefully disrobe each clove from its papery casing and add them to the blender. The garlic will (obviously) be very hot, but the softened cloves should pop out easily enough. Add the cumin, oil, lime juice, tahini, and plenty of salt and pepper, and blitz the lot together till it has become a smooth, slightly nubbly paste.

Add a little fresh water to thin it if need be, and taste for whether it needs anything more – whether it needs the sharpness of more lime, a little extra body from the oil, depth from the cumin or the old fashioned helping hand of more salt and pepper. Spatula into a bowl or container and refrigerate till you need it, and festoon with mint leaves, more olive oil, and sesame seeds (or of course: more sunflower seeds) to serve, if you wish. 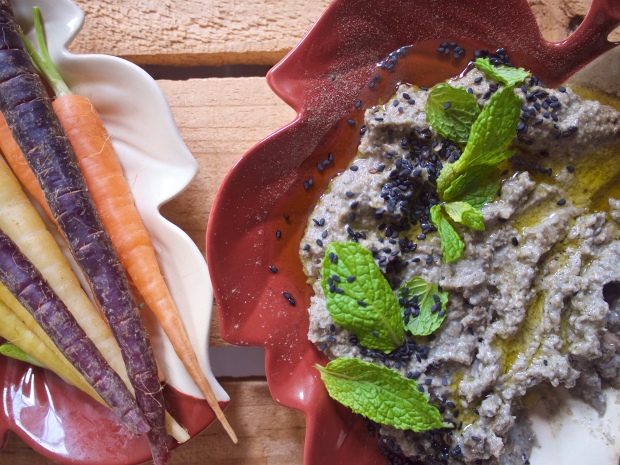 And finally, its salinity helped replenish my depleted vital electrolytes after watching the remake of A Star Is Born, that monumentally melodramatic movie that I consumed with predictable breathlessness. I have many thoughts about it which I wrote and then deleted (on the one hand, there’s a lot of “I see you, Brunette Girl” as a trope, on the other hand, at last: a movie where Bradley Cooper is handsome) and literally whenever I even think about the bit in the trailer where Lady Gaga walks towards the mic and starts howling I get tearful and frantic like a fretful infant, but I also can’t stop rewatching the trailer just so I can see that bit again.

If you agree, enthusiastically, with my claim that people always need dip, then may I also recommend the following recipes on here: Tarator (somehow basically just bread and water but also incredible) pomegranate-laden Hummus, or lush Cambodian Wedding Day Dip.

title from: Memory, the ubiquitous torch song from the musical Cats. For me there is but one person who I acknowledge in the role of Grizabella, and that is the late Laurie Beechman. I thought I’d heard this song so many times that its power was entirely diluted but her singing it makes me cry every time including right now. The emphatic h’s that she throws in at the start of words (“all alone h-with h-my memory”); the gentle vibrato rumbling on “enter innnnnn”; the slight youthful creak to her voice that’s just so appealing, (reminiscent of Glynis Johns or perhaps even Alma Cogan); the way she belts so hard while looking like she’s barely getting started yet and you’re looking around like where did that voice come from? Just watch her.

The Sacred Harp Singers, Soar Away. Yeah, I don’t know, I’ve just been listening to a lot of this particular kind of old-timey church music. This one though: a stern and ominous banger, I have played it back easily 100 times in the last week without exaggeration. There are stirring enough versions of modern sacred harp groups performing it on youtube but to my ears, the definitive rendition (on spotify only unfortunately) is this, a decades-old recording which has a kind of shouty, nasal, rough-and-ready vibe that renders modern interpretations too soft and polished and frankly unfearsome.

Wedding Bell Blues, by Laura Nyro. Man, she was just not afraid to be sad and haunting, even, if not especially, in the middle of what sounds deceptively like just a classic sixties-girl-group song.

Will You Smile Again For Me, by …And You Will Know Us by the Trail of Dead. It’s very good!

Next time: well, not that damn Irish Soda Bread, that’s for sure.

PS: if you wish to receive these blog posts newsletter-style in your inbox before everyone else sees them, you can, should, and may sign up here.

2 thoughts on “daylight, see the dew on the sunflower”