A birthday in lockdown is no great hardship compared to the breadth of suffering and distress worldwide resulting from COVID-19. I also can’t pretend to be winsomely diffident, it took some getting used to – but it was only a very small adversity. There were many positives: I received a lot of love online – and truly, there’s no greater gift than online displays of affection. Would I rather have an elaborate present, or a nice instagram story about how much someone loves me? That’s so unchallenging a question it’s practically rhetorical. (But the answer is the latter, in case I wasn’t clear.) I also got to make dinner for my family, and since making dinner is a pastime I anticipate with irrational vigilance, it was like another gift to me.

On the menu was pesto seitan, a salad with the final precious avocado for the foreseeable future, and something I call Triple Pickle Macaroni, since, well, that’s what it is. Like all good recipes this idea appeared in my head all at once, fully formed, and all I had to do was make it. I was going to call it a Mac and Cheese because it’s certainly evocative of that wonderful dish, but there’s no actual cheese involved and something in the sheer inelegance of the title Triple Pickle Macaroni cheered me hugely. Now, no matter how defined the image of a recipe is in your mind, the tangible result doesn’t always match up. Fortunately for me, my family, my birthday, and ultimately you: it was so delicious.

The pickled elements I refer to are sauerkraut, gherkins and pickled apples, each of which tangle into the creamy sauce and provide tangy, biting contrast. With all the sharp-sweet-saltiness going on it almost tastes like there is cheese involved, and in fact – well, I’m only human – I concede it would probably taste particularly great with actual cheese added. Naturally, referring here to vegan cheese – if you can find one which doesn’t go unsettlingly waxy when melted then feel free to plough ahead and stir it in. Should you eat cheese made out of dairy I’m not going to hold it against you if you put it in this recipe, nor would I assume you’d care what I think about this decision, but you know I’m obliged to mention our terrible expensive vegan cheese first. Should you have no cheese of any sort to hand, fear not: the Triple Pickle Macaroni is wonderful on its own. Rich, robustly hearty, tasting of lurid kitschy yesteryear and the punctilious present all at once, dense enough to make you sleepy but strewn with enough vinegary bursts of texture to wake you back up again.

In my last blog post I talked about the overwhelming, impenetrable irritability that has grown like a haunted forest around my brain in lockdown. If I may be frank, after some reflection I’m not entirely convinced it’s me being disagreeable – I think people really are just becoming more annoying. I am, however, doing my best to remain sanguine. Turning 34 was not at all what I thought it would be, but it was, all told, a rather happy little birthday, and I’m immensely grateful to everyone who helped make it so.

Note: I don’t assume you have pickled apples to hand – you can use pretty much anything else you think would work, whether it’s pickled onions, beans, zucchini, whatever. Or just more sauerkraut and gherkins.

1: Cook the macaroni in a large pan of boiling, well-salted water for about eleven minutes or until it’s tender.

2: Meanwhile, stir the coconut oil, olive oil, flour and Marmite together in another pan over a medium heat, continuing to stir for about five minutes or until it’s somewhat thickened. Slowly add the oat milk, continuing to stir the whole time. Let it simmer away over a low heat, stirring often. It should be fairly thick and saucy but still plausibly able to coat a whole lot of pasta at this point, add more milk if it gets too thick.

3: Stir in the nutmeg, nutritional yeast, and all the pickled ingredients. I’ve suggested 1/4 cup of each as a starting point but you can absolutely add more, indeed, I encourage it.

4: By this point your pasta should be cooked. Drain the macaroni, reserving about 1/2 a cup of the cooking water, which you then add to the simmering sauce. Taste the sauce to see if it needs more of anything, then stir through the drained macaroni. Serve sprinkled with a dusting of paprika.

This makes a LOT, and will serve four people very generously with plenty of leftovers, and probably up to eight people as a side. 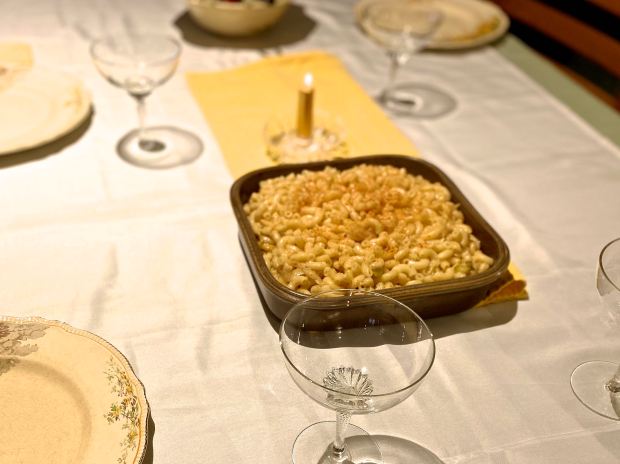 I Want You To Love Me, by Fiona Apple. The only thing better than public displays of love on my birthday is Fiona Apple releasing a brand new album. This is the first song on Fetch The Bolt Cutters and it arrives with a clatter of piano keys and Apple’s throaty voice and her lyrics which have the emotional effect of being suddenly kicked behind the knees: Whenever you want to begin, begin/We don’t have to go back to where we’ve been/I am the woman who wants you to win/and I’ve been waiting, waiting for you to love me.

Simon Zealotes, from the musical Jesus Christ Superstar, covered by Ledisi. Very specifically, I’ve been listening to the stretch between 2:12 and 3:09 over and over where she sounds especially incredible, and I strongly encourage you to do the same, I wish the whole song consisted of this bit.

Cheree, by Suicide, I love this song so much, it’s kinda creepy and yet makes it feel like the world is full of possibilities all waiting for you to discover them, which is, you must admit, a rare combination to pull off.

Next time: the pesto seitan was also super delicious and I finally am truly at one with seitan, so I might post that recipe.

PS: If you enjoy my writing and wish to support me directly, there’s no better way than behind the claret velvet VIP curtain of my Patreon. And if dovetailing is something you’re keen on, then there’s truly no better time than at this close proximity to my birthday.