This mustard tomato broth is like that. But in broth form. This is noisy food. When you eat this mustard tomato broth, all you can sense is its ingredients, and not your spiralling thoughts. I’m not saying I’m anxious right now, but even at my most serene my brain still sounds like someone is tap-dancing to Scotland the Brave while brandishing a chainsaw (as I often say, I only wish I were exaggerating for comic effect) and yet – I was notably silenced by my own lunch. 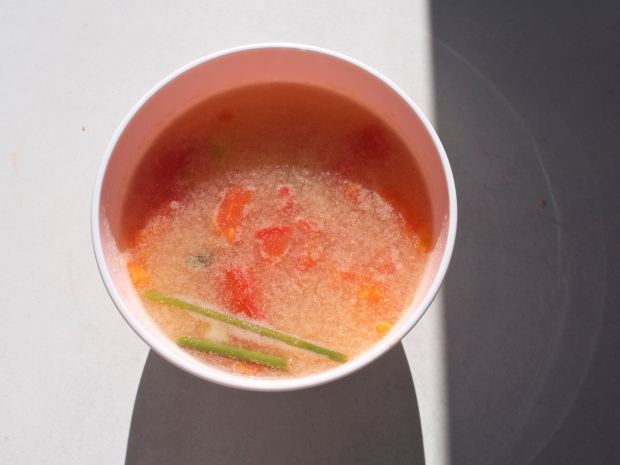 The main source of shock-value here is a brisk spoonful of sinus-punting mustard powder. There’s balance though, it’s not mere distraction, otherwise I might as well simply direct you to snort the powder instead of cooking with it. You get sweetness and rich salinity from the tomato, briefly steeped in salt to draw out its liquid, effectively making you a small quantity of highly-flavoured stock. There’s lemongrass – if you have it – or a strip of citrus peel, to lend the broth an air of zesty optimism, and spring onion for its obvious savoury backdrop.

You can add extra bits to your broth, of course. I would’ve used chilli flakes but a mouse broke into our cupboard and ate them, so I used chilli sauce instead – only a drop, because there’s enough going on already without being wilfully obtuse. A dash of sesame oil would probably be lovely, you could also try this with horseradish instead of mustard if you can get hold of it. Though the tomato and salt has to sit around for a while, the remainder of the recipe requires the briefest of heating and stirring – and just like that, you have an outwardly tranquil and inwardly rambunctious snack.

I was tempted to call it Anti-Anxiety Broth on its own, but would like to hope the bulk of you can enjoy my recipe removed from that particular context, on top of which I don’t want to saddle it with expectations. Besides, the most relevant attribute is: it’s delicious. 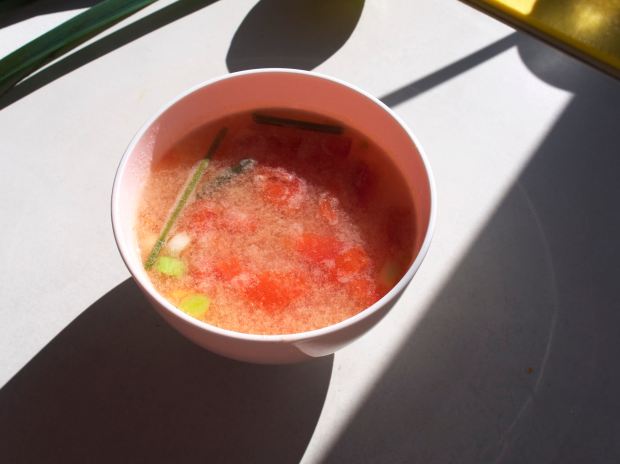 1: Dice the tomato quite finely, removing the green stalk, and place in a small bowl or cup and sprinkle over the salt. Leave to sit on the bench for half an hour to an hour.

2: Transfer the entire contents of the dish – tomato, salt, drawn-out liquid – into a small pan. Stir in the mustard powder, then add the sliced onion, lemongrass stalks, and the water. Bring the liquid to the boil, stirring as you do, and remove from the heat as soon as it reaches this point.

3: Stir in chilli, to taste, and then tip everything into a small bowl. 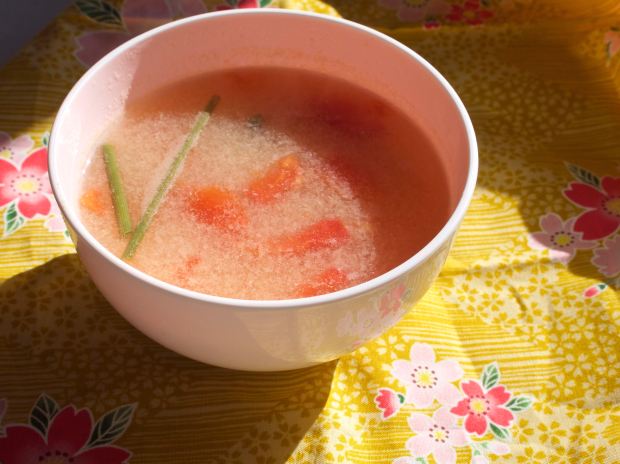 Cokane in my Brain by Dillinger. This is so charming and breezy and garrulous. “A knife a fork, a bottle and a cork, that’s the way we spell New York.”

Nag Nag Nag by Cabaret Voltaire, wonderfully sparkly and energetic yet droning and miserable, a true winning formula for capturing the attention of my ears.

King of the Wild Frontier, Adam and the Ants. When those drums come in! I have a real thing for any song that sounds this urgent, even if the urgency itself is lost on me. Back to the drums, if big noise is also your thing I highly recommend this incredible recording of The Drummers of Burundi from 1987, it was their sound which directly influenced – or was nicked by – bands like Adam and the Ants.

Next time: still working on that ice cream.