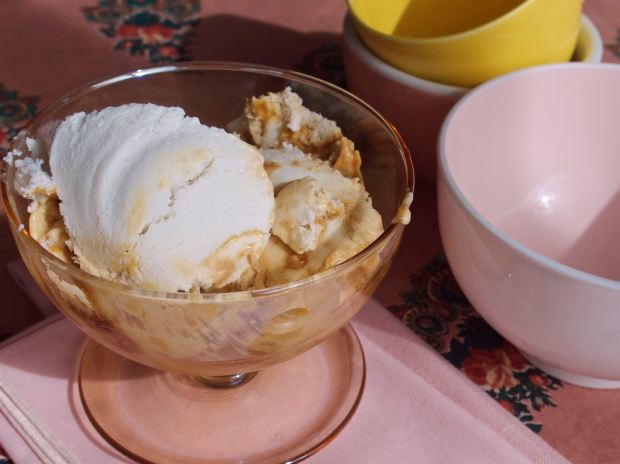 Hokey Pokey is what you might call an iconic ice cream flavour here in Aotearoa, and its beauty lies in its simplicity and that texture – crunch against cold creaminess – and I’ve done my best to honour it and the collective sentimental memories of our tastebuds here in my homemade version. I won’t pretend that you can’t taste the coconut cream, but that’s the vegan life for you – and it’s hardly a bad thing! Coconut is delicious! If anything, its mellow beachiness only serves to enhance the hauntingly sweet depths of the caramelised sugar. 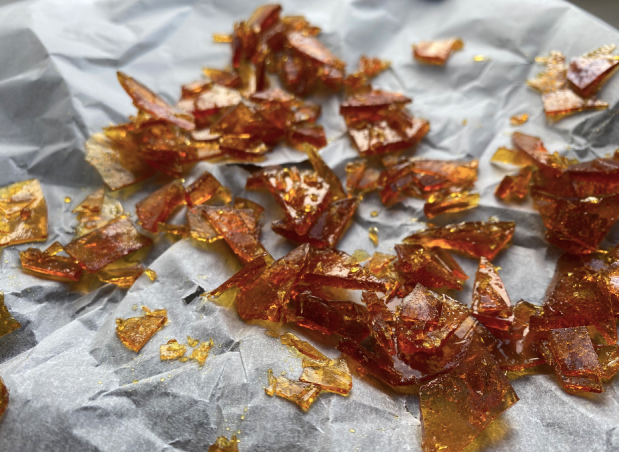 This should all be easy enough to write about – childhood reminiscing, recreating familiar foods in vegan form, yada yada yada, but I had to make the honeycomb thrice – threefold! – before I got it right and now I find myself losing valuable writing hours burrowing into lyrics websites looking for a stanza from a Limp Bizkit song that I can use as an allegory – is it that I really like Limp Bizkit (yes) or is it that I read the new Sally Rooney novel and I’m subconsciously bucking its high-minded walls of academic epistolography (possibly? how self-aware) or is it just some garden-variety ADHD hyperfocus on the wrong thing (let’s face it, probably) or is it that I’m five weeks into waiting out a lockdown, a lockdown that’s obviously the correct thing to do for the greater good and no real hardship to myself, but as such my imagination is growing wearier and wearier from over-use yet under-use simultaneously – yes, possibly that, too – but in fact, I think it’s really just that I’m still recovering from making three batches of honeycomb.

Every time I burnt that sugar it felt like part of my soul cauterised and fell off with it; but don’t let my rivers of hissing sugar and propensity for dramatics put you off: I suffered so that you don’t have to, and with a little patience this is genuinely quite straightforward, and you earn your heavenly reward in the form of a creamy tub of velvety-smooth ice cream with melting yet crunchy honeycomb and toffee dappled throughout. That being said, I wouldn’t recommend making this if you’re hungover or feeling fragile, or if you have small children rushing about, or indeed, if you are a small child yourself. This requires concentration (which is why it’s barely surprising I burnt the first two batches of sugar) and confidence, because you’re taking your boiling hot melted sugar and quickly, decisively, parting it two ways – into a sheet of clear, golden toffee (which will provide the requisite crunch that one seeks in all hokey pokey ice cream experiences) and into a billowing mushroom cloud of honeycomb (which slowly fades into the ice cream providing pockets of dissolving caramel.) 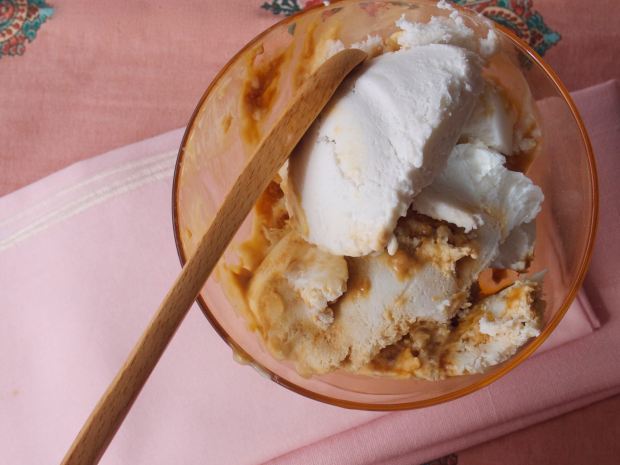 Somewhere between frantically warning you of the dangers of handling hot sugar and reassuring you that there’s actually nothing to this, is my most important point: this vegan hokey pokey ice cream tastes SO GOOD, and as soon as you have that first mouthful you’ll not only be flush with nostalgia-flavoured serotonin you’ll also be absolutely reeling from the weight of your own competence – the most elusive flavour of all – and you’ll know it was all worth it (and maybe you’ll even hear Limp Bizkit singing this could be the one, I know I did.)

PS: if you really want to make life difficult for yourself, why not put on a double feature with my homemade vegan Jelly Tip ice cream recipe while you’re at it. Feel free to replace the vanilla ice cream mixture of that recipe with the coconut cream/coconut condensed milk of this recipe – for my money, it’s the superior method. 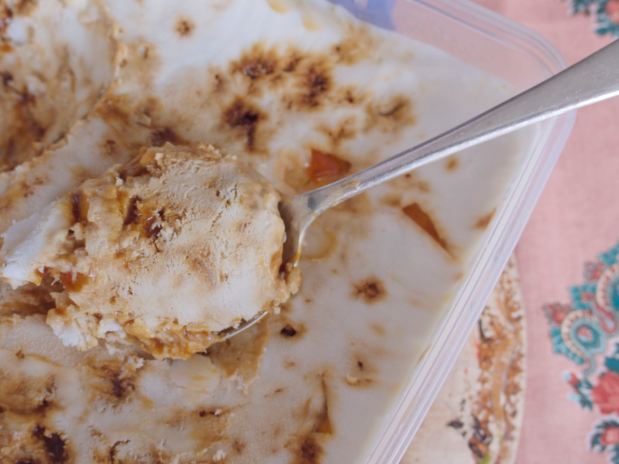 Lush, velvety vanilla ice cream with crunchy and melting honeycomb, the taste of your childhood and the promise of a brighter future, all at once. This takes some patience – specifically the double-sugar honeycomb and toffee aspect – and I recommend you read the recipe fully before embarking, although it’s a lot easier than the length of this makes it look – but obviously I wouldn’t lead you down this rocky path without good reason (that reason being: this ice cream is so delicious.) As always, my homemade ice cream recipes are and will forever be no-churn. Recipe by myself.

1: First, the ice cream mixture. If you forget to put the coconut cream in the fridge the night before, at least try to get it cold for a few hours. Scoop the chilled, thick coconut cream from the top of the tins into a bowl (reserving the remaining coconut water for now) and using either electric beaters or a whisk and some energy, beat the coconut cream until thick and whipped looking. Pour in the sweetened condensed milk and beat everything again on high speed (or with your whisk) to thoroughly combine, then pour in the remaining coconut water from the tins and the vanilla and beat again. Apologies for how convoluted this sounds! You’re essentially just mixing your coconut products together and doing it this way ensures a creamy texture later on.

2: Pour this coconut mixture into a 1.5 litre capacity container, fix on the lid, and pop it in the fridge to let the flavour develop/mellow out while you make the honeycomb and toffee.

3: Now for the sugar. Before you do anything else, find two roasting trays or shallow, lipped baking trays and line them both with a large sheet of baking paper, and also measure the baking soda into a small cup or bowl so it’s ready to go when the sugar is melted. Place the sugar and golden syrup into a heavy saucepan and slowly melt it over a low heat, stirring constantly, until it’s gone from sugar to a gritty paste almost resembling peanut butter, to a melted puddle of caramel that’s starting to simmer around the edges. I feel the need to tell you that this is unbelievably hot so please pay attention and don’t – as if by automatism – lick the spoon.

4: Once it’s melted and just starting to simmer, remove the pan from the heat and quickly ladle a small quantity of the molten sugar – about 3 tablespoons to 1/4 cup but for goodness sake don’t try to measure it – onto one of the waiting paper-lined roasting trays.

5: Tip the baking soda into the remaining sugar syrup in the saucepan and stir it in briskly – the mixture will turn pale and billow spookily yet intriguingly upwards – once it starts doing this, carefully scrape as much as possible of your pale honeycomb onto the second paper-lined roasting tray. Now – pick up the first tray, confidently but respectfully, and tilt it gently from side to side to let the toffee spread out. You can try to do this with the honeycomb as well, but once that stuff is in place it doesn’t really like to move. Let both trays cool completely – this may not take very long or it might take about an hour, it all kind of depends on the weather and the vibe of the thing etc.

6: Use a wooden spoon or other implement of your choice to bash the cooled honeycomb and toffee – a very gratifying exercise after all that frantic activity earlier – breaking them up into small pieces. You can draw the four corners of the paper together and scrunch the honeycomb around to break it up further, I don’t recommend doing this with the toffee however, as it’ll stick together. Sprinkle a pinch of salt over your honeycomb and toffee crumbs (I find the saltiness works best distributed this way rather than directly in the ice cream mixture but, to be honest, it’s up to you, just put some salt somewhere at some point.) Remove your ice cream mixture from the fridge, tip in the honeycomb and toffee pieces, stir gently, and then place the container in the freezer for about six hours or overnight.

As with most homemade ice creams, this benefits from sitting around on the. bench for five to ten minutes to soften up a little before serving. Makes around 1.25 litres, give or take. 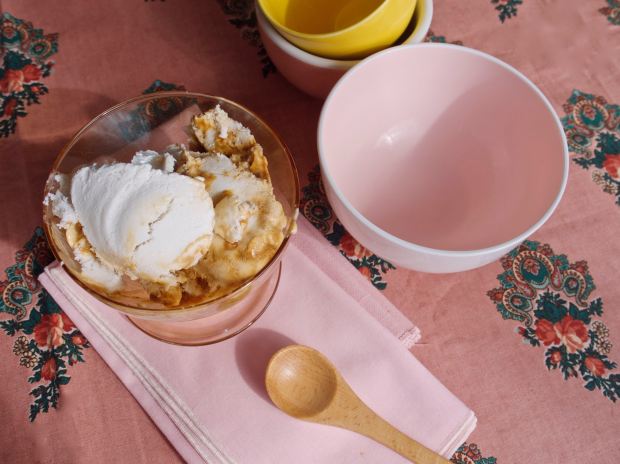 Våren by Grieg, sung by Jane Powell and Jeanette MacDonald in the 1948 film Three Daring Daughters – Jane Powell always radiated sheer delightfulness and she was a comfort to me both in her films and in her general existence as one of our last remaining threads from the Golden Age of Hollywood; I would often look up her Wikipedia page just to be cheered by knowing she was still here and was terribly sad to learn of her death today. She’s mostly known for Royal Wedding and Seven Brides for Seven Brothers but this song – where she sings with the legendary 1930s soprano MacDonald – is pure magic.

Meet Me At Our Spot by The Anxiety, the collaboration between Willow Smith and Tyler Cole – the studio recording is amazing but this live version is just…magnificent, it’s so simple and relaxed and yet it hit me like an untethered fridge flying off the back of a truck going 100 miles per hour. Willow’s voice and energy and that chorus is simply everything!

America by Simon and Garfunkel – sometimes their mannered and careful enunciation sets my teeth on edge but this song specifically makes me feel positively unhinged levels of emotion – the eerie humming at the start merging with the tail end of the previous song immediately puts me in a trance, and when they get to the “hitch-hike from Saginaw” part I lose it every time (I actually looked Saginaw up on Wikipedia out of curiosity and started crying while reading facts about its municipalities and average precipitation, that’s how powerful this song is) and if I haven’t started crying by then I absolutely will be on the ground howling and beating the earth with my ineffectual fists by the time they make it to the New Jersey Turnpike.