Any recipe that centres around a thick layer of frosting and not much else will have my immediate and enduring respect. And yet, even as a dedicated lover of icing, I also respect and understand that you need the contrast, the cake—something to hold the icing up like a plinth bearing a golden trophy, something for the icing to drape across like a silk-robed lounge singer reclining on a grand piano. Ginger Crunch is a classic recipe—by which I mean, I guess, that I remember seeing it in glass-covered bakery cabinets as a kid and I have some years to my name now—and it is an unrivalled victor in the genre of Modest Base/Big Icing. (And saying this suddenly brings to mind the cinematically perfect pairing of short king Joe Pesci with the tall and absurdly beautiful Marisa Tomei in My Cousin Vinny, a film I recommend to one and all.)

I assumed the internet would be flush with vegan versions of Ginger Crunch but ten pages into Google and all I could find were raw vegan recipes, usually involving large quantities of dates, and like, no disrespect to dates but that is NOT what I was looking for nor am I interested in pursuing that path. Of course dates can have their place in baking, but they don’t have to be in everything, and more importantly, everything vegan doesn’t also have to be raw and supposedly healthy. So, without anything to compare it to, I just made up a recipe myself and hoped for the best. I was determined to make this as simple as possible: no extra spices, no nuts, no crystallised ginger or pistachios or anything to interrupt the simple alchemy of flavours at play. I’m confident enough to make a vegan version of something everyone will recognise, but I’m not going to let that confidence go to my head. (Also, I didn’t have any crystallised ginger or pistachios or anything in the pantry.) 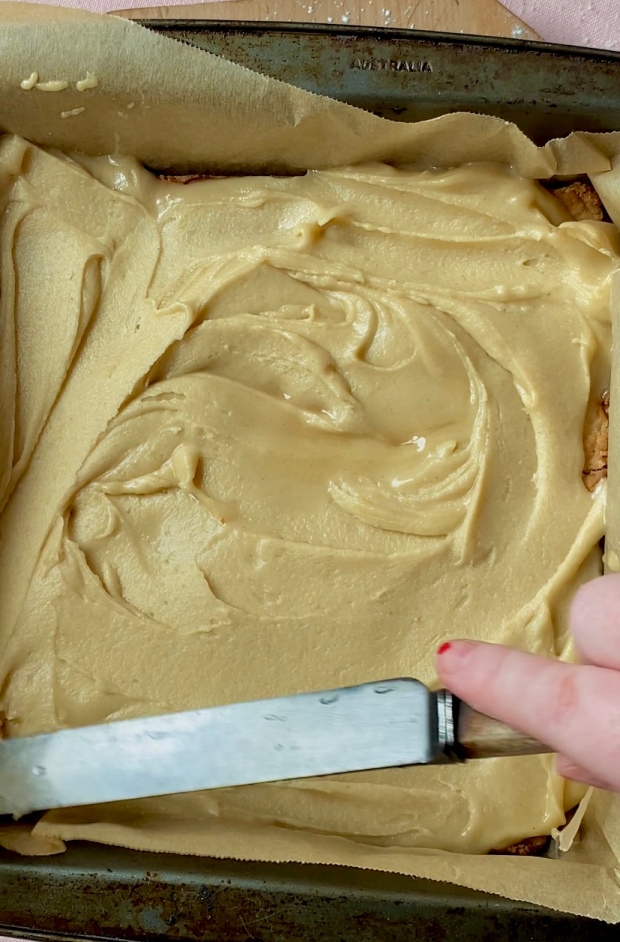 And fortunately, what resulted was – the best! Just as it should, my vegan Ginger Crunch has a crisply oaty and entirely unobtrusive base, and a thick, fudge-dense, throat-burningly gingery frosting. The trick is to really go up to the knife’s edge of too much ginger, too hot, too peppery, and then to balance it out with so much sugar that your palate is constantly trying to process what’s happening to it. I mean, otherwise, what’s the point? That’s what makes this interesting, that push-pull between heat and sweet, between the intensity of the icing and the mildness of the base. In case I’ve made it sound scary I assure you, this Ginger Crunch is very normal and will be easily reminiscent of the ones you may have eaten yourself throughout your life. Nothing raw, nothing masquerading as health food, just happy, delicious, (vegan) nostalgia. And it only uses one bowl. (For reasons that infuriatingly I can’t fathom the tiktok that I made absolutely refused to embed despite not being in any way different, so if you want to watch it you’ll have to follow this link like they did in ancient times.) 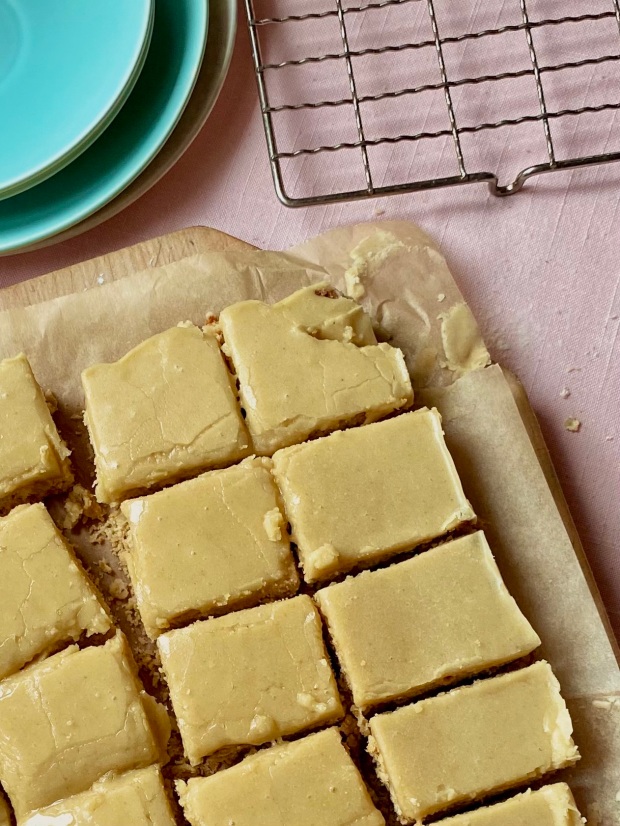 My vegan version of the classic slice with no surprises, just an oaty base with a thick layer of ginger icing. Simple as that. Recipe by myself.

1: Set your oven to 180C/350F and line a 20cm square brownie/slice tin with baking paper. Place the 1/4 cup refined coconut oil, 1/4 cup oat milk, and the 1/4 cup golden syrup in a mixing bowl and stir to combine. Add the remaining ingredients—the 1/2 cup rolled oats, 2 cups flour, 1 and 1/2 teaspoons baking powder, teaspoon of ground ginger, and pinch of salt, and stir to form a crumbly dough.

2: Tip this dough into your paper-lined tin and press it down into an even layer with your hands, or the back of a spoon, or both. Use a fork or knife to stab a few holes here and there—this will help it cook evenly—and bake for 20 to 25 minutes, or until golden brown.

3: While the base is baking in the oven, you can get on with the icing. In a mixing bowl—and you might as well use the same one as for the base—stir together the 3 tablespoons refined coconut oil, the 3 tablespoons golden syrup, the 2 tablespoons of oat milk and the 1/4 teaspoon of malt vinegar. It’s fine if the spoons of coconut oil and golden syrup are on the heaped side. Stir in the level tablespoon of ginger, then sieve the 2 and 1/2 cups of icing sugar into this mixture and stir to form a thick frosting, adding a little more milk if it’s too stiff (I had to add about a tablespoon).

4: Spatula the icing over the base while it’s still hot from the oven—the frosting will collapse and spread easily into an even layer—and then refrigerate until the icing is firm and matte (as you can see from the photos, I was not patient enough to wait). Cut into pieces as large or as small as you want, I got 25 pieces out of my somewhat wobbly slicing.

You really do need to locate proper golden syrup for this to work (that is, if you’re in America or another country where it’s not a common ingredient.) Treacle would be absolutely fine, although I can’t imagine it’s any easier to get hold of. I don’t think maple syrup or corn syrup would work here, sorry, the former lacking the texture and the latter lacking the flavour, but having golden syrup to hand is endlessly rewarding so it’s worth the effort. Molasses would take it in an entirely new direction, but it probably wouldn’t be unpleasant.

The icing ingredients might not look very promising but real hungryandfrozen-heads will recognise my quick emulsion method (for which I really need to come up with a better name for) where coconut oil, milk, and a tiny splash of vinegar come together with icing sugar to make the most incredible, classic-tasting frosting.

Love Me More, by Mitski. There’s a new Mitski album. Naturally, I’m not okay! Naturally, it’s all brilliant!! I don’t know how she keeps coming out with new albums that somehow sound even more Mitski-ish than the ones before, but that’s why she’s Mitski and I’m just a weepily appreciative idiot.

Little Trouble Girl by Sonic Youth. Kim Deal featuring on a Sonic Youth song with this title and with this kind of mellow yet sinister arrangement is precisely the sort of combination that makes a hundred thousand people say “this was made just for me” and of course, I am one of those hundred thousand.

Aries, by Mary Lou Williams, from her delightful Zodiac Suite, composed and recorded with remarkable prescience in 1945. There is literally something for everyone (except, I suppose, people who don’t believe in horoscopes.)