It’s a truth universally acknowledged that cakes look more exciting and complicated if they’re baked in a fancy tin. It just seems more impressive if it’s shaped like castle turrets or a giant rosebud or the Trevi Fountain. I mean, it’s not like you actually painstakingly sculpted the cake into this particular form with a palette knife while wearing a beret. But there you go.

I was predictably excited to buy on sale recently a good sized silicone bundt caketin. I feel as though a bundt tin falls comfortably between practical and largely dust-gathering on the kitchenware scale. It’s really just another cake tin, not as usable as a 23cm springform but not as confoundingly quixotic as, say, a madeleine tray (nothing against madeleines – every time I make them I end up wondering why humans haven’t evolved to make small, honeyed cakes a staple food). A bundt cake just looks so majestic with its undulating curves and waves and towering hilltop form, so much more than your perfectly serviceable but normal looking regular round cake.

I was initially going to make a fabulous sounding orange cake from Annabelle White’s Annabelle Cooks, which sported a large, fetching image of an orange bundt cake. However the recipe specified a 26cm springform tin and the disparity between instruction and image made me far too nervous. Not on my first bundt.

Instead I went for an equally lovely sounding Spice Cake from my charmingly eighties (if it moved, they set it in gelatine) Best of Cooking For New Zealanders cookbook by Lynn Bedford Hall (look for it in your local charity shop – I could use it every single day). As well specifically requesting a ring tin, it also used less eggs than the spurned orange cake. It was all going just peachy. You know me, always happiest when messing around with cake batter. I piled the cinnamon-spiced, nut-spiked batter into the tin, put it in the oven, marvelled as the house filled with the warm, happy scent of cinnamon…Oh how wrong I was. Fate (and possibly Annabelle White) were standing behind me, pointing and laughing the whole time.

Because then this happened. 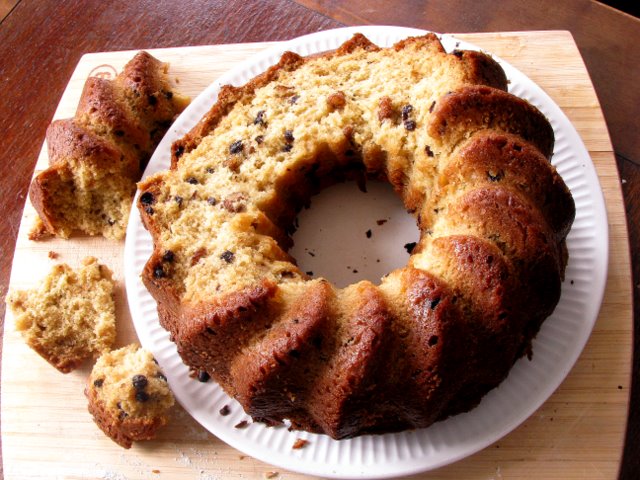 What now? That’s just not fair. You know how there’s that saying? Pride goeth before a fall? Well with me it’s excitement goeth before a fail. If I had a dollar for every time… Seriously, I don’t know what went wrong. Half the cake just decided it wasn’t ready to leave home yet. Any guesses from seasoned bakers out there? The tin was silicone and everything. I wonder if I didn’t leave it long enough before turning it out? Maybe I left it too long? I’m in a quandary!

Aesthetics aside, the cake itself is really delicious though and very, very easy to make. Whatever I did wrong – presuming it was my fault at all – I definitely won’t take it out on the recipe itself. If you want to recreate this psyche-damaging disaster in your own home feel free, may you have better luck than I had…

Set the oven to 180 C (350 F). Place all the ingredients except for the nuts and sultanas into a large bowl and mix with electric beaters for one minute.

If you don’t have electric beaters (like me), mix together the oil and sugar, then the eggs, then everything else till it’s incorporated good and proper. Then, fold in the nuts and sultanas.

Spread this thick mixture into a bundt tin and bake for an hour, covering loosely with tinfoil if it starts to darken too much. Stand for five minutes (which I did!) before inverting onto a cake rack.

As you can probably tell from the ingredients this makes a large, moist, delicious cake that keeps well and has a gentle warmth from the spices used. Which means I can overlook the fact that it had a total breakdown in front of me. And I will carry on bundting.

For my sake at least, so I don’t feel completely like what the French call les incompetents, here below is an example of something I actually achieved without a hitch.

I’ve made this caramelly, oaty slice before, blogged about it even, but whatevs. I’m calling upon it again. And at least you know it’s good.

From Nigella Express by Nigella Lawson

Preheat oven to 130 C, and oil a 23x33cm baking tin or throwaway foil tin. Warm the condensed milk gently in a pan till it is more liquid than solid. Remove from heat and then add the rest of the ingredients, stirring carefully with a spatula so everything is covered. Spread into the tin, even out the surface, then bake for about an hour. Let cool for about 15 minutes then slice up. I swapped the expensive cranberries for a handful of currents lurking agedly in the pantry and left out the peanuts because I just didn’t have any.

Nigella reckons this slice gets better with age and I agree – it just sort of settles into a chewier, nuttier, caramellier bite the longer you leave them. Super easy and good to have on hand to assuage any dips in blood sugar.

For what it’s worth, and I realise there’s little more nauseating than couples who start talking in their own cutesy language, but we’ve ended up pronouncing the word slice, as in oaty slice, “slee-che”, inspired largely by Dr Leo Spaceman (pronounced spa-che-man) from 30 Rock. It’s funny how many words you can start manipulating in this way. Face, place, rice, ice…it’s like a Dr Seuss book here sometimes. Actually I have a really bad habit of mangling words when speaking casually. Such as ‘whatevs’ instead of ‘whatever’ which is a bad enough word in itself. I like to lengthen the ‘i’ in chicken so it rhymes with ‘liken’ and drop the end of ‘decision’ so it’s just ‘decish’ and frequently substitute the letter ‘j’ with a ‘y’ or an ‘h’…it’s all a bit obnoxious really but I like to think of it as taking a simple joy in linguistics. Look at this, I haven’t even been tagged with an internet meme and yet I’m revealing a bizarre fact about myself. Is that allowed?
.
The big news in our lives right now is that Tim is walking around looking all medieval, as while I was in Auckland one of his teeth just crumbled on him like an uncooperative bundt cake. He didn’t tell me till six days later when we met up again as he couldn’t figure out how to explain it in a txt message. Fair enough, I guess. As per usual the dentists want him to mortgage the tooth against our house with his liver as bond (ooh, I’m typing all heavily just thinking about it, the prices dentists charge get me all fired up.) Because he couldn’t afford a root canal and I couldn’t even afford to support him for it, he instead paid a smaller (but still hefty) sum to have the tooth pulled altogether. It’s causing him no small amount of pain, and we’ve been eating very soft, liquidy dinners over the last couple of days – soup, long-simmered, falling apart stews, that sort of thing. Luckily it’s not an entirely visible tooth but nevertheless, I’d like to think he has the panache to pull off looking like a Renaissance-era minstrel.
_______________________________________________

On Shuffle whilst I type:

Amen by Jolie Holland from Escondida. We were lucky enough to see her in a beautiful, intimate gig earlier this year. If the idea of Appalachian folksy blues appeals to you then you would do well to look her up. This particular song is simply stunning.

John The Revelator by Son House from The Roots of The White Stripes, a compilation of the original blues and folk songs that the White Stripes have covered either live or in albums. Sounds tacky as hell but it’s not – it’s a fantastic listen packed with gems both dust-covered and well known.

Why Can’t I Be Like The Boss a song cut from the 2006 Tom Kitt musical High Fidelity. I kinda love this song, especially when the Bruce Springsteen character really gets going.