Do you ever think up something new only to find out that this something already exists? Recently I was mildly amused by some of the artists on offer while flicking through the blues section at Slow Boat Records, and thought it would be kinda fun if there was some kind of “Blues Name Generator.” A website where you enter your name and it in turn spat out out something that would ostensibly be your blues artist name, something like Stumblin’ Tuscaloosa Mary or Three Fingered Lowell Pickering or Pork Cracklin’ McDooley. But yeah, the internet is already home to multiple blues name generators. Multiple. Shoulda known. Moving on.

It must be the nature of existing in the world we do though, right? There are millions and millions of people wandering round and it’s only inevitable that some of our ideas will overlap and occur without connection to each other. Sometimes it can be a positive thing though, this doubling up of concepts. It can act as a kind of reinforcement that the idea was a good thing in the first place. (Not that people can’t have collectively terrible ideas, where to start with examples…)

To wit: I had it in my head that lentils topped with a poached egg might be cool. This developed further when I thought about padding it out with what else was in my kitchen – butter-fried leeks, a sprinkling of almonds and feta… Then I completely second-guessed myself. Is lentils and egg together both freaky and depressing? At best? Leeks – are they still hip? Would the whole thing be too earthy and aggressively sulphuric? Would the brown, yellow and green shades call to mind a polyester blouse from the 70s instead of effortless culinary elegance?

Then, reading a copy of esteemed local publication the Listener, I found in Martin Bosley’s food column a recipe that more or less mirrored what I came up with. Since Mr Bosley himself is such an estimable and celebrated local foodsmith, like a passive fairy godmother saying “you shall go to the ball,” I gained from his similar idea the confidence to proceed with my own. 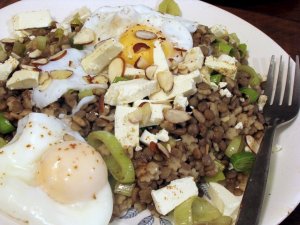 Not saying you shouldn’t be afraid to experiment. Not at all. But seriously. Lentils. Sometimes a little positive reinforcement helps. And this definitely leans more towards modern elegance than 70s polyester in food form. I should have had more faith in myself – after all, it seems these days you can drape a poached egg over practically anything and it suddenly becomes chic.

To have this happen in your own life, bring a large pan of water to the boil and once it is at a merry rolling bubble, pour in 150g brown lentils. (I added the rest of a near-empty packet of tiny stelline pasta for no other reason than it was annoying me) The lentils should cook through in about 20-25 minutes. Meanwhile, wash and thinly slice a leek. Melt a generous knob of butter in a pan and once it’s sizzling gently add the leeks and stir continuously till they collapse and become slightly caramelised. I added a splash of very good balsamic vinegar because I’m lucky enough to have some. Once the lentils have cooked through, drain them thoroughly and transfer them to the pan of soft, buttery leeks (now off-heat) and stir through. Finally, poach four free range eggs. Divide the lentils between two plates, place two eggs on each, and sprinkle with sliced almonds, feta cheese, and smoked paprika. 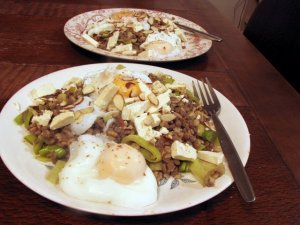 This dish is pretty delightful. The softened, slightly fuzzy lentils against the silky egg yolk, the nutty bite of the almonds against the slippery leeks and sharp, creamy cheese all tastes brilliant together. The range of flavours and textures made it way more interesting to eat than it could initially sound. Thanks Martin Bosley for unwittingly providing the affirmation that I needed.
It’s not being precious or, I don’t know, elitist to say that you need really good free range eggs for this. It’s pretty simple. Surely Jamie Oliver has put out enough TV shows for this to be obvious now. Granted, laying eggs is what hens do, but it surely isn’t the most dignified way to make a living and I’m pretty sure these hens aren’t supposed to be laying eggs on command every single day while being underfed and cramped in a tiny cage with no room to move, alongside thousands of their similarly oppressed sisters like a nightmarish scene from a dystopian novel from the 1950s. Hens deserve better than that. Why, buying free range eggs is positively an action of female empowerment. Support your feathered sisterhood. I think I’m on to something here. Free range is a feminist issue. Unless it has already been written about by the lovely Bust magazine or somesuch… At the rate I’m going I wouldn’t really be surprised. Ooh I’ve thought of something. No. It already exists.
So there’s all that. But also, importantly, free range eggs taste comparitively amazing to the super cheap, sinister battery cage eggs. They really do. If you think otherwise, I’m afraid your opinion is wrong. Choose free range: not only are you getting a better tasting egg, you’re helping hens break through the glass ceiling! Or something.
This next dish comes without any such quasi-political fist-shaking attached to it. This was dinner a week or so ago. 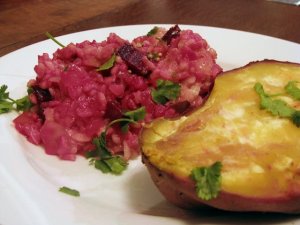 Roasted Kumara with Roasted Beetroot Risotto. Seriously good stuff. I wrapped a large kumara and a large beetroot in tinfoil and roasted the pair for about an hour in a hot oven. I made a risotto of half arborio rice, half pearl barley (any excuse to use an unsexy grain, me) and once the vegetables were roasted I roughly chopped the beetroot and stirred it through the risotto. The kumara I cut in half and divided between two plates along with the risotto and sprinkled it with coriander seeds – my latest obsession, their dusky lemony flavour is delicious – and also actual coriander which I discovered quietly floundering in the fridge in dire need of use. It’s funny, I always feel like I need coriander but then whenever I buy it, it tends to get forgotten about.
A pretty fabulous dinner this was, and unlike the last dish, a Bollywood-bright plateful of gorgeous colour. The earthy sweetness of the beetroot and kumara, emphasised by the long roasting time, went really nicely together and I’ve always loved the texture of pearl barley which lends itself easily to a risotto.
Had a smashing time up in Auckland (I was up there for six days, hence the rolling tumbleweed/chirping crickets nature of the blog lately). I met some fantastic people and ventured into the oft-talked of ‘burb of Ponsonby, wherein I felt often felt pretty Wellington and occasionally…very rural. I was naively excited to patronise such classy places as SPQR and Prego, that I’d previously only read about in Cuisine magazine. You’re not in Otaua now, Laura.
Words can barely, barely express the joy that was Patti LuPone and Mandy Patinkin in concert. I read an adequate review of the night from the NZ Herald newspaper but I think what the author missed out on was how exciting it is that these two people are in New Zealand at all. This sort of thing just does not happen. Broadway stars don’t come here. Whoever at The Edge organised it, I salute you and hope this sets a prescedent for other performers that there is, in fact, an audience for them in New Zealand.
Anyway, words clouding issue here. They were both spectacular. For those of you who don’t know, I usually found it easiest to describe Mandy Patinkin to people as the guy who played “My name is Inigo Montoya, you killed my father, prepare to die” in The Princess Bride. Patti LuPone probably graces a lot of peoples’ CD collections without them realising it – Wikipedia her. She should need no introduction but it’s not really our fault here in New Zealand, at the bottom of the world, that we’re not exposed to people like her very often. When she sang that intensely dynamic opening line, “I had a dream, a dream about you baby” from Everything’s Coming Up Roses, from the show Gypsy that she won a Tony for last year…it was surreal. And incredible. Tim was there with me, and Mum and Dad at the last minute bought cheaper rush tickets so it was nice to have people around to share the excitement with. I could go on about how fantastic they both were – wait, I already have – but it’s not really necessary, it kind of goes without saying. They were both so comfortable on stage and a serious joy to watch. And I got a photo afterwards with Mandy. Woohoo!
Also: saw It Might Get Loud, which only served to make Tim and I each fall more in love with Jack White (Meg is awesome too, but he was the focus of the film, so). Jimmy Page was a complete gem and of course the Edge is a talented guy. It’s not his problem that U2 isn’t really my thing, I’m sure. On Thursday night I saw a fab local band called Alex The Kid who play super fun music with a scientific bent; due to their name they’re a bit hard to google so why not click here for their Myspace? The following night, after It Might Get Loud we went to see Auckland rapper Tourettes, who I’ve been enamoured with for some time now. The opener was this guy called Tommy Ill, when he came onto the stage I totally judged him on his Where-the-wild-things-are style furry hat but he was adorable and fun and I’d easily pay money to see him again. Tourettes was just seriously fantastic, and I was beyond stoked that he did two spoken word segments during the gig. I can’t pretend I’m a huge listener of rap, I like a bit of De La Soul (specifically: Ooh), Wu Tang Clan and Beastie Boys, but it’s not really my first choice. So maybe that amplifies how much I like this guy’s stuff.
______________________________________________________
On Shuffle Whilst I Type Feverishly
Farewell Ride, from Guero by Beck. It’s funny, I never think of myself as being a massive Beck fan but every time something of his comes on Shuffle I’m all, hmm, yeah, I like that.
La Ville Inconnue from L’Immortelle by Edith Piaf. She continues to amaze.
Thank You For Sending Me An Angel from More Songs About Buildings and Food by Talking Heads. Imagine if Talking Heads and Velvet Underground never existed. What on earth would cool people these days be influenced by?