Even though I’m usually about as rock’n’roll as Rod and/or Todd Flanders today I make an exception: I wrote this operating on about three hours’ sleep, having danced merrily till 5am on Saturday night at San Francisco Bath House to the enchanting stylings of the UK’s DJ Skitz and Deadly Hunta (who charmingly professed a liking for my peanut butter cookies and therefore I’ll not hear a word against him.) However other members of our entourage returned home around 10.30 on Sunday morning which gave me some perspective. Anyway, you have been warned: coherency at this stage is likely to be a joke, at best.

It was also at 10.30 yesterday morn when I quietly photographed this Kumara (sweet potato) Spice Cake, making the most of the crisp, chilly Sunday light. I pilfered the recipe from the lovely lovely Hayley’s blog, knowing as soon as I read her post that I’d have to recreate it as soon as possible, because it sounded so fantastic.

I adapted the recipe slightly. I added some cinnamon. I didn’t have any white chocolate in the house so dark chocolate was drizzled over instead. Now, I love me some white chocolate – I’d spread it daily on hot buttered toast. But I do think that the dark chocolate I substituted contrasted so awesomely with the sweet earthiness of the cake and its spices that it would be hard to use anything else. It’s a complete breeze to make and happily requires a bundt cake tin, thus justifying me actually owning one. 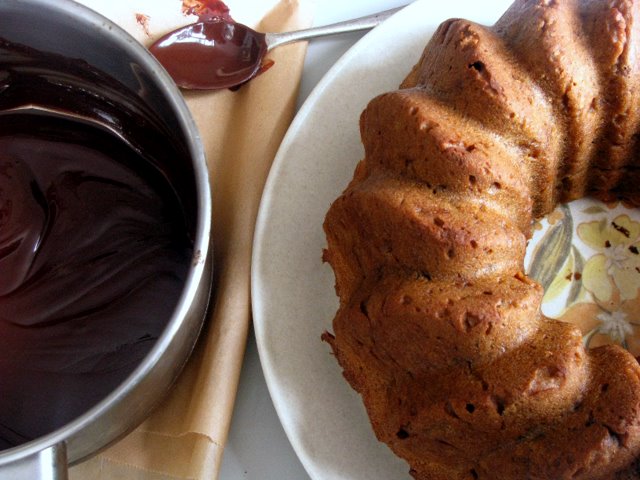 The title is a bit dubious, so if you know you have fussy people to feed I’d just refer to it as spice cake or something. The rest of the world knows the secret ingredient as Sweet Potato but here in New Zealand we call it by its Maori name, kumara. Your word is more universally explanatory but I like ours better.

Cook sweet potato in a saucepan of lightly salted water for 15-20 min until tender and drain well, running cold water over the colander to cool it down faster. You should be able to mash it with a spoon but feel free to puree it in a blender, either way it needs to be smooth with no lumps.

In a bowl, beat the butter, maple syrup, golden syrup, and sugar together until creamy. Add eggs, one at a time beating well after each addition. Fold in sweet potato puree. Sift flour, ginger, bicarb soda into the bowl and fold in gently till combined. Spoon batter into prepared pan, smoothing top. Bake for 45 min until cake pulls away from sides and a skewer inserted into the centre comes out clean and dry. Cool in the pan for 10 min or so.

This is just our kitchen bench. It’s wide enough that it creates a kind of limitless visual space on film, ideal for when I want to attempt fancy-looking photos. I am still in wonder at how decent our new kitchen is.

Meanwhile, melt the chocolate and add the cream then drizzle over the cooled cake. Watch out for the chocolate running down the wavy dents in the cake – fun! Using a silicon spatula, scrape out the bowl with the icing in it and eat the rest once you’re done. Magical stuff.

Not a bad job considering I was drizzling chocolate, taking photos and trying to remain standing on two feet this whole time.

There is something strangely alluring – to me at least – about cakes which have vegetables in them. It’s fun to tell people after they’ve had a bite, and to think about cake offering nutrients (the actual kind that a food nutritionist would recognise. Not emotional nutrients.) It also opens a new world of texture and flavour possibilities. This cake is amazingly good so don’t be scared of the vege content. The kumara keeps it amazingly moist, offering a subtle but particular flavour, and an absorbent, softly sweet carrier for the more strident ginger and cinnamon.
_____________________________________________________

On Shuffle Whilst I Type:

A dirty great ton of RENT.

If you are in Auckland and get the chance to go to the I Love The Islands benefit tonight, do it! There’s a lot of horror in the world but the earthquakes that deeply damaged Samoa and American Samoa recently have stuck with me, I guess because New Zealand has not so much close ties with Samoa but a total overlap, a weaving of the fibres of our fabric that make up some metaphor of what we are or…something. Basically, it’s completely terrible what’s happened, the line up for I Love The Islands is amazing and it’s for a really good cause. Do it if you can.