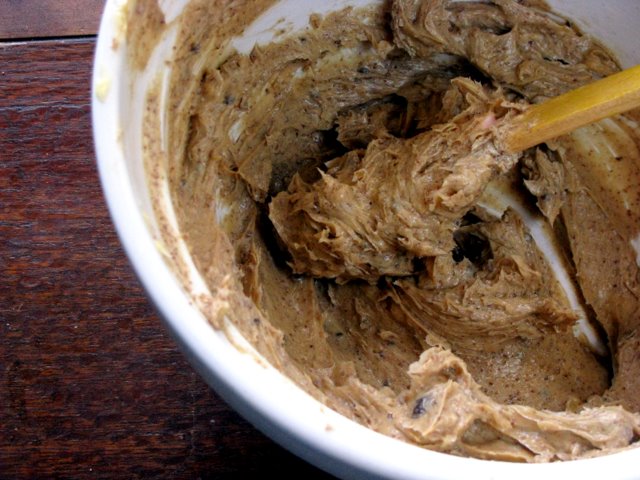 Marvel at the joy that is butter and sugar mixed together.

When left to my own devices of a weekend I tend to start baking without even thinking. Ginger Crunch or Ginger Slice or even Ginger Crunch Slice if you want to be equal-opportunistic, is something of an example of traditional New Zealand baking and for some reason it has been top of my to-do list for a while…I guess since I last baked something. Sometimes I can be thinking about baking something but also excitedly anticipate the next thing I’ll bake after that – special, huh.

Google Ginger Crunch and you will be met with roughly the same recipe from all the usual reliable channels – Edmonds Cookbook, Alison Holst, Chelsea Sugar (who I am deeply suspicious of now that they’ve released chocolate-flavoured icing sugar – I hate the term ‘nanny state’ but that’s what, of all things, sprang to mind when I saw it on shelves) etc etc. I can now say with confident confidence, that the Ginger Slice I made yesterday improves greatly upon anything you will find on Google. I say ‘improves’ not ‘is vastly superior and practically perfect in every way’ because in all fairness, I simply added a few crucial elements to the various traditional recipes floating round everywhere and would not have come up with it in the first place were it not for what has been set in place by Edmonds et al. 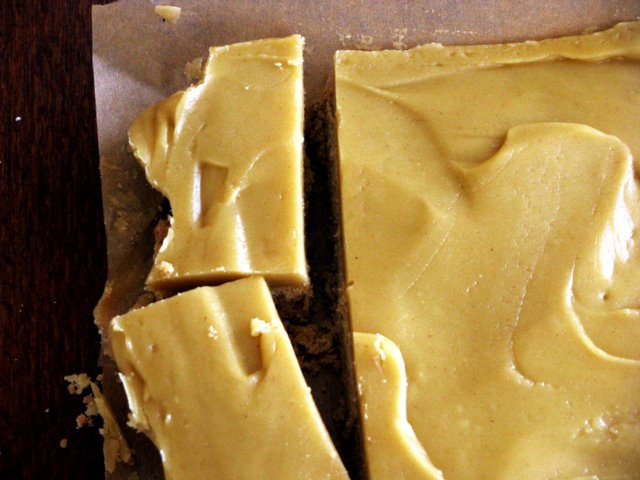 Set the oven to 180 C. Grab a regular sized square or rectangular brownie/slice tin – you know the kind I’m talking about – and tip in the rolled oats. Put this tin in the oven for a couple of minutes while the oven is heating till the oats are nicely toasted but absolutely not burnt.

Using a wooden spoon or spatula or some other kind of utensil that takes your fancy, beat the butter and sugar together till light and creamy. Muscovado sugar is a little dense and crumbly so fear not if some of the sugar remains in lumps. As I said, brown sugar is fine too, and is what I generally use if I see muscovado sugar asked for in a recipe. But muscovado was cheap at the local supermarket…

Tip in the toasted oats (putting a sheet of baking paper into the now-empty brownie tin), bran, flour, ginger and baking powder. Stir together carefully till it looks like biscuit dough, soft and clumpy. Tip this mixture into the brownie tray, pressing down with the back of a spoon. Bake for 15-20 minutes till nicely golden on top.

This is one of the simplest and loveliest icings you can make. While the base is baking, gently melt together the butter, golden syrup and ginger in a small pan over a low heat. Once it comes together in a golden spicy puddle, remove from heat and stir in the icing sugar. As soon as the base is cooked, pour the icing over it, still warm and smooth out if necessary. Refrigerate for 1/2 an hour or so before slicing into fingers.

I lined this photo up all carefully on the benchtop and then realised that I couldn’t see into the viewfinder and that the icing was moving faster than I could take photos and this is why you see the icing being poured from a mysteriously hovering vessel with no-one apparently holding on to it. But the price is right.

Ah, the cutesy things we do with our food for the sake of our food blogs.

Anyway: this stuff is quite ridiculously amazing. Adjectives fail me.

Not to sound like the girl who cried ‘ridiculously amazing’, I admit I say this about lots of things that I blog about, but I guess this means I only cook stuff I really like to eat, right? The base is thick and biscuity, with a slight nutty quality from the toasted oats. The icing is incredible, fudgey and dense and throat-warmingly gingery. So delicious you’ll want to pour it all over your own head. Together? Faintmakingly excellent. There’s something about the caramel qualities of golden syrup and dark brown muscovado that provide the perfect vehicle for ginger’s heat and fragrance. Kindly don’t just take my word on this – make it immediately! It’s so easy and quick and you’ll have people simply falling at your feet with gratitude. If it was physically possible, I would have fallen at my own feet after eating a slice of this slice. As I said earlier though, it was entirely inspired by the original recipe that you will find in the Edmonds Cookbook and other stalwarts of New Zealand food-making that I duly salute here. 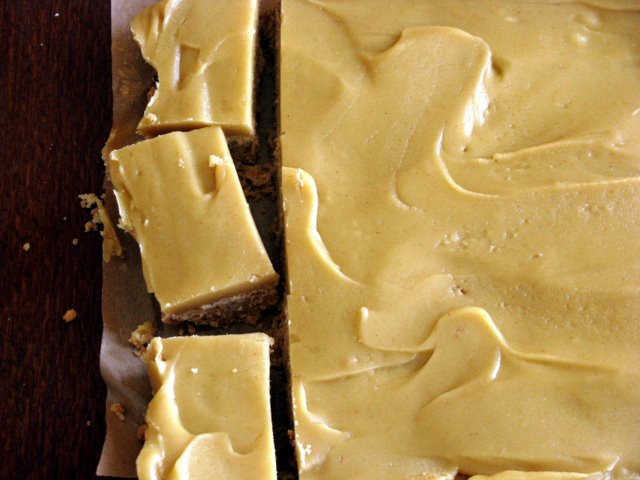 It’s actually currently Labour Day weekend here in New Zealand, which means that drearly melancholy Sunday afternoon feeling that can sometimes set in is bypassed by a happy Monday off work. My weekend is a mellow one but I’ve got a few ailments that I’m trying to fight off so it’s nice to just have time to chill out. On Friday night Tim and I had the immense joy of seeing Little Bushman combining their considerable talents with that of the New Zealand Symphony Orchestra at the Town Hall, for an evening of incredible, incredible music. The sound ranged from the deepest psychedelic rock to the most hushed of gentle ballads, amplified by the full-on orchestra surrounding them. Our tickets were a bit of a last minute acquisition but I’m so glad we went.

No thanks whatsoever to Ticketek though, who made us pay $8 extra for “venue pickup”. After waiting 20 minutes in line at the venue we were told that we had to go to the Ticketek office down the road to get the tickets. While I’ve got my ranty hat on, can someone who falls under the category of ‘powers that be’ please enlighten me – why on EARTH are theatres built with seats from which you may be hidden behind an enormous pillar or can’t actually see the stage? And then tell me why companies like Ticketek can charge enormous amounts for “restricted view” seats? It makes no sense. By the way, we’re going to see Elaine Paige. Or at least, we’re going to hear Elaine Paige while seeing an enormous pillar’s dramatic interpretation of Elaine Paige. Maybe we can stick a cutout of her face on the pillar? (I don’t actually know if we’re literally behind a pillar, and it is admittedly my fault for not buying tickets sooner, but my point stands: why? Also: I hope she does Nobody’s Side! Am currently listening to Chess like there’s no tomorrow.)

Title of this post brought to you by: That perennially sunny song from Dave Dobbyn and Herbs, Slice of Heaven, from the Footrot Flats: The Dog’s Tale soundtrack. We had it on video (taped off the telly) when I was young and it was completely thrashed. I could probably act it out for you from start to finish I watched it so often as a wee nipper. After the movie was done it would fade into Mr Bean’s Christmas special which funnily enough we were also happy to watch year-round. I dunno if this song has also been thrashed – though not as much as some of Dobbyn’s tunes – but listening to it now still makes me feel happy

On Shuffle While I Type:

– Welfare Mothers from Neil Young’s Rust Never Sleeps – was on a complete Neil Young kick today and while I’m not someone who chooses favourites, this amazingly good track is definitely up there with the other thousand favourite songs I have.

–Minuet by Idina Menzel from her debut album Still I Can’t Be Still. You won’t find this in shops but it’s a gem worth tracking down…seldom have I heard an album so full of personality, depth, honesty, so full of self as this, plus the mid-to-late 90s overproduction is adorable. It’s ideal for blasting loudly on a weekend morning.

Hope all the New Zealand readers have a peaceful, restful, generally super Labour Day break. And that everyone makes this ginger slice. It’s marvelous! Feel free to pronounce it ‘slee-che’, people will think you’re really sophisticated if you do.

15 thoughts on “slice of heaven”