On Friday we had our Office Christmas Party. Capital letters because it feels like some kind of social institution…articles, columns and entire pull-out sections of glossy women’s magazines emerge at this time of year offering advice on office parties and how to organise/survive/acquit yourself with dignity/deflect awkward photographic evidence from said shindig. Ours was largely without incident and I had a marvelously pleasant time. I only mention it because I bonded particularly with a colleague while eating our lunch about how much we loved leftovers, in particular barbequed sausages, eaten cold for breakfast early the next morning while standing at the open-doored fridge. That moment of connection achieved more than a thousand team-building activities involving blindfolds and ‘trust’ games, I promise you.

And no, I’m not just saying how much I love leftovers because Nigella goes on about them too. Although I will allow that she kind of makes it easier to admit to such activities…like picking at a chilled roast chicken while standing at the fridge, perhaps alternating with a spoonful of raspberry jelly or trifle from its bowl that you’ve surruptitiously peeled the clingfilm back on…

As you can imagine we definitely had leftovers after last Sunday’s flat Christmas dinner. Some things got demolished, like the ham in Coca Cola. But it turns out that I made enough potatoes to service another three Christmas dinners. Not that this is any kind of problem…On Monday night I used some of those potatoes in a Spanish Omelette, from Nigella Lawson’s Nigella Express. 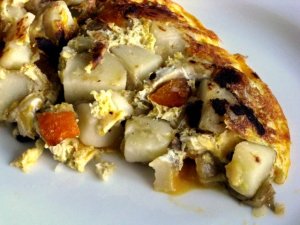 A golden, eggy crust containing hot chunks of new potatoes and juicy capsicums. It’s quick and it’s fabulous. We don’t eat potatoes that much and I forget how good they taste. There’s a simple evolutionary reason – Tim is usually working when I go to the vege market on a Sunday, and there’s really only so much I can deal with toting back to the flat. Having a glut of leftover potatoes this week has been no burden whatsoever – cold with gherkins, sauteed with coriander and cumin seeds and cinnamon, simmered in a vegetable curry – delicious. I love them.

Turn on the grill and let it heat up. If the potatoes aren’t already cooked, halve and boil them until tender then drain. Whisk the eggs in a bowl, then add the capsicums, spring onions, cheese, and potatoes. Heat the butter and oil in a small, oven-proof frying pan and when hot, tip in the omelette mix and cook gently for five minutes. Eventually, the base of the omelette should begin to feel ‘set’ and rather than trying to flip it, instead sit the pan under the grill for a few minutes to set the top. Turn the omelette out onto a plate to cool. Even if it’s slightly wobbly it should carry on cooking as it cools. Slice into wedges. Note – I left out the cheese and used a lot more potatoes.

I’m not sure if this a great photo to display the merits of this dish, but it really does taste good. My omelette kind of fell apart as I attempted to slide it onto the chopping board and a bit of it stuck to the pan because SOMEONE had a huge fry-up one weekend when I wasn’t there and damaged the nonstick finish. The fact that it was non free-range eggs and those permanently soggy supermarket hash browns made it not so much insult to injury as an offense worthy of a punch to the face. (Don’t worry, Tim only got a verbal facepunch. I am pretty anti-violence, even when it is involving the nonstick finish of my good pan.)

A week has now passed since I was in the Sunday Star-Times Sunday magazine. So far, no movie deals or cookbook offers but I have had some interesting, and often completely lovely, correspondence. I don’t mean to keep going on about it, but be nice, this is the first time anything like this has happened. I was once in an ad for Camera House when I was three years old, but at the time I didn’t have a food blog to promote and thus it was just a one-off opportunity. These days, who knows? A three year old blogger could well be my biggest competition, and they’ve probably got more Twitter followers than me too.

Speaking of the passage of time, it’s now ten days till I go home for Christmas. To which I say: aaaaargh. It feels like I have a lot to achieve and not much time to achieve it in, which would be…accurate. However, I Skyped with Mum yesterday and managed to get some thoughts in order (my thoughts previously were: Christmassdkfhsdfwph). I’ve spent today serenely making edible Christmas presents for people which has been great fun. All will be revealed recipe-wise after Christmas to make it fair on those actually receiving these gifts. Tim is hunting for our little $2 shop Christmas tree and I’ve been playing my traditional Christmas playlist, (entitled “Hark! Merry Christmas from Laura!”), where I’ve gathered together seasonal tunes by artists I love (you can hardly claim to have lived till you’ve heard Johnny Cash and Neil Young duetting on The Little Drummer Boy) and artists that I’m dubious about at all other times but Christmas (you can hardly claim to have lived till you’ve heard Twisted Sister’s aggressively upbeat take on O Come All Ye Faithful.) Every year I scour the internet for more tunes to add to this increasingly ridiculous list and I look forward to doing it again this year. All that and I’m going to tape some tinsel to our bookcase. Fa la la la la. Bring it on.

Obviously some Hark! selections, including…

O Holy Night, sung by the ever-ridiculously-astounding Julia Murney and also Max von Essen, who I don’t feel quite so strongly about. I do like how it remains gently but firmly secular in its delivery. And how Julia Murney sounds incredible.

And then…The Avenue by Roll Deep, from their album In at the Deep End. Rediscovered it recently – takes me back to the summer of 2005 when I was in England and it still holds up as an ideal happy summer tune.

Out of the Blue by Julian Casablancas (if you thought I was going to say Julia Murney again, then ten points to you) from his solo debut, Phrazes for the Young. I like his album but it does have a lot of awkward song titles…Though really, as I’m a Pink Floyd fan I can hardly judge him. Anyway, this song chugs along merrily and has a joyfully sing-along chorus. And every time you listen you can think of Mr Casablancas and his lovely eyes and floppy hair which is no bad thing at all.

Next time: I may cook even more potatoes, since Tim miraculously had the day off today and was thus able to be my pack-mule at the vege market. I may also provide even more Christmas music ridiculousity…