Even though I’m pretty sure I never got fed sago or tapioca when I was a kid, I always assumed I didn’t like it. It just sounded like one of those things I should resist. I don’t remember reading, as an impressionable kid, any Malory Towers books where the girls in lower 6th are all “oh golly, not that sago again.” In fact my main food impressions that I took from those kind of books was that a) there is romance in the tinned peach b) kippers are apparently a Good Thing and c) I want biscuits and butter, right now.

There are many, many things in this world you don’t have to experience to know you don’t want them, but sago…? It really falls more into the category of “broaden your horizons and don’t be so narrow-minded, fool”. And to be fair, I can’t really hate on something that reminds me of Thoroughly Modern Millie (one of the best films ever).
I don’t tend to research heavily before launching into a blog post but hit up Wikipedia after looking at the back of my packet of Budget Sago Pearls, (ingredients list: “Sago”. The nutritional information – not much more than a few long-lasting carbohydrates and a little sodium) and thinking “what even is this stuff?” Turns out sago comes from a sago palm – of course! – and is not only the food staple of many countries, the sago plant rivals the awesome soybean for intense versatility in that it can be a key ingredient in (according to Wikipedia) adhesives, paper, ethanol, high fructose glucose syrup and MSG. I mean, that is some wide-ranging output. The starch of the sago palm is also made into sago pearls and the larger tapioca pearls, which can be turned into a whole lot of different puddings.

I used a recipe in Jill Dupleix’s book Lighten Up which looks like it’s based on the Malaysian Sago Gula Melaka pudding – sago coated in a palm sugar syrup and coconut milk. It’s fairly straightforward to make and the end result is so incredibly good that I consider myself a full convert. Not to mention, this is a seriously cheap-but-pretty-fancy-looking pudding to be serving up. The bag of sago cost me less than $2, and none of the other ingredients cost much, but the results are gorgeous. I realise it’s not as immediate as, say, chocolate pudding, but if anyone you serve this to tries to tell you they don’t think they’ll like sago, kindly direct them to the above category that it sits within. 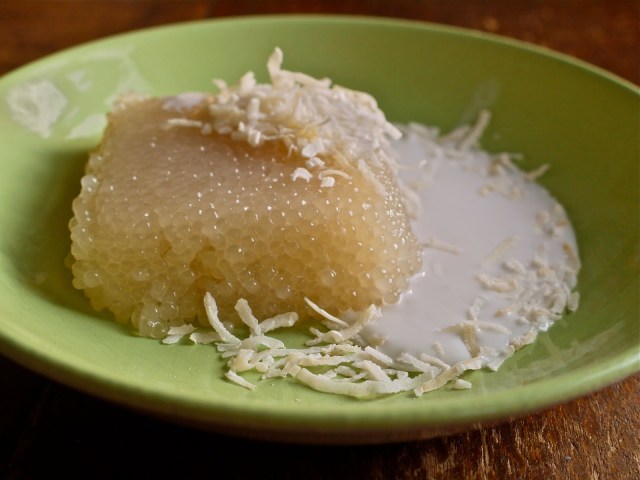 Sago Pudding with Palm Sugar and Coconut Milk
From Jill Dupleix’s Lighten Up
150g pearl sago
80g brown sugar or palm sugar
100ml coconut milk
pinch of salt
Bring a pan of water to the boil. Add the sago slowly and stir, leaving it to simmer away for another 15 minutes or so, stirring occasionally.
Meanwhile, gently heat the sugar and 100mls water in a pan, allowing it to dissolve and reduce slightly to a syrup (don’t let it overheat though!) Drain the sago – this was a bit of a mission, the sago sticks to things, then rinse under cold water and drain well.
Tip it into a bowl and add half the sugar syrup, half the coconut milk and the pinch of salt. Mix well, pour into four ramekins or bowls or whatever and refrigerate them for a couple of hours. Run a knife around the inside of the ramekins and turn out into a bowl, pouring over the rest of the sugar syrup and coconut milk. Jill suggests mango on the side, this would be perfect but I didn’t have any so sprinkled over some coconut threads instead. Serves 4.

Each grain of sago is so perfectly round and gleamingly opague, it’s like a mass of tiny bubbles clinging together on your plate. Its texture is weirdly addictive – I guess “cold and slippery” isn’t the most alluring description but give it a chance – the sago absorbs the light, caramelly syrup and the richness of the coconut milk and is seriously, seriously delicious.
I stupidly tried to strain the cooked sago into a regular colander…which has sago-sized holes in it. Luckily I managed to quickly chuck it into a fine-meshed sieve. The bits that landed in the sink and stuck to everything though were kind of magic looking – like solid water droplets, tiny shining orbs, like something David Bowie’s character in Labyrinth (first crush!) would eat…or twirl craftily on his hands.
_______________________________________________________________
Title via: The Beatles…fertile ground for blog post titles, hey.
_______________________________________________________________
Music lately:
Tim and I had a fairly full on weekend, catching The Newtown Rocksteady (twice!) and Street Chant, who came down from Auckland for an album release gig. I love Wellington but sometimes I see advertisements for gigs happening in Auckland and think “wahh”, I guess because it’s where the majority of people live it’s where a lot of the stuff happens, so it was cool that Street Chant made the effort to get down here. It was a bit late in the day when we got to their gig, but we had a very good time. Check out Yr Philosophy if you like.
There are two musicals called The Wild Party, both based on the same Joseph Moncure March poem, and both hit the stage around ten years ago. I tend to go on about the Andrew Lippa version (we-hell, Idina Menzel and Julia Murney, as well as Taye Diggs and Brian D’arcy James) BUT the LaChiusa version is also, naturally, seriously awesome. And had an even heavier-weight cast, with the likes of Eartha Kitt, Toni Collette, Mandy Patinkin and Marc Kudisch. I seriously love Toni Collette’s song from this musical – The Lowdown-down, and how her sultry voice draws out the lyrics. When we saw Patti LuPone and Mandy Patinkin in Auckland last year I got him to sign my copy of the cast recording afterwards at the stage door – yusss!
_______________________________________________________________
Next time: I made some stuff from the Edmonds cookbook, but I also made brisket…you’ll read it all eventually, and knowing me, I’m picking the baking will probably be next up to the plate.