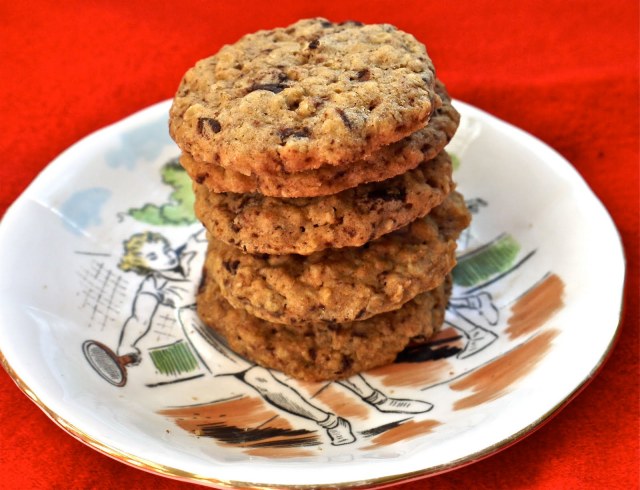 Oatmeal cookies, and the Chocolate Chip Cookies that they overlap with on the Venn Diagram of Cookie Genres (it might exist…) are nothing new, and there are roughly a million recipes out there for them, but still, even if you didn’t grow up with tins full of baking, there’s something old-fashionedly comforting about biting into a half-crisp, half-chewy biscuit, buttery and caramelly and a little nutty with rolled oats, maybe with some chunks of dark chocolate to luxe things up deliciously. They’re fast to make and relatively inexpensive and keep for as long as you can hold out from eating them.

They also, a lot of the time, involve creaming butter and sugar together. We don’t have a microwave and the butter conditioner in the fridge just sits there stubbornly making the butter colder, so anything with softened butter either requires wrapping it up in tinfoil and sitting it near the heater, on the coffee maker, whichever’s on, or back when we had our PC, on top of the hard drive. Or leaving the butter out overnight and hoping the kitchen is be warm enough to soften it into cream-able submission. Which means there’s generally a bit of a distance between myself and oatmeal cookies. Or at least there was, until I saw this recipe that I’m going to share with you… 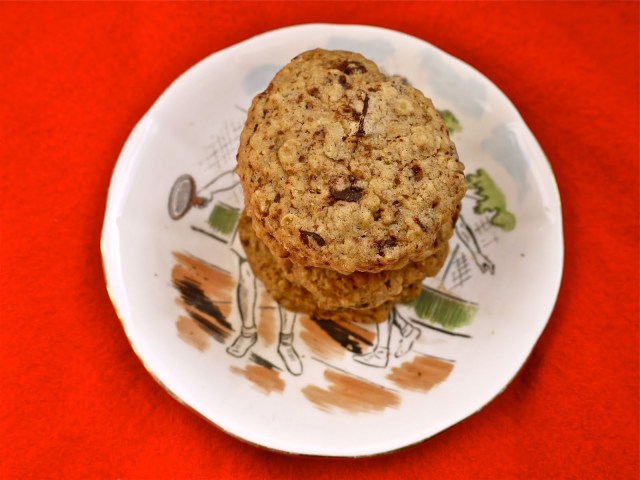 I found this recipe on a blog called The Hungry Engineer. It awesomely uses oil which I could then take the liberty of switching with melted butter. Not that I have anything against oil. I just want butter in my life and I figure that they’re similar enough to not get fussed over. That said, if you stick to the original recipe, you’ve got yourself a mighty good dairy-free cookie. And I’ve got something that I don’t have to enter into a MacGyver-style assault to be able to actually make it.

And yes, there’s absolutely nothing wrong with the melted-butter based Anzac biscuits, but I didn’t want to go adulterating them with chocolate and brown sugar and stuff. Leave well alone I reckon, and this recipe below is a more than worthy solution.

With thanks to The Hungry Engineer blog

Set your oven to 180 C/375 F, and get out a couple of trays and line them with baking paper. Whisk together the butter (or oil) with the sugars and egg. Mix in the flour, baking powder, oats and chocolate. Scoop out spoonfuls of this (magically delicious) mixture and drop them onto the trays. You don’t really need to flatten them out – the heat of the oven takes care of that. Bake them for 9-12 minutes, swapping the trays halfway through if you like.

Let them cool a little before eating, because burning hot chocolate on the tongue is no fun at all. 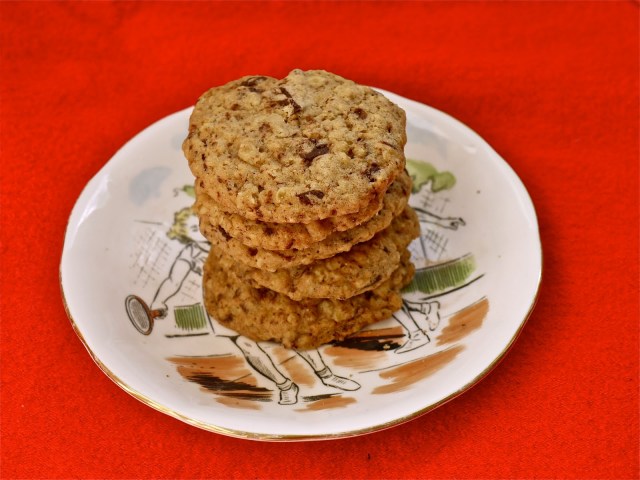 These cookies are so good, for the reasons outlined earlier (as well as the obvious – it’s a chocolate chunk cookie, title speaks for itself, right?) The timer buzzer on our oven decided to join our butter conditioner and refuse to work, so these cookies were overcooked by about five minutes – this is the difference between chewy and crisp. They’re still really good, but next time I make them I’m going to be paying more attention, as I lean towards a chewy preference. 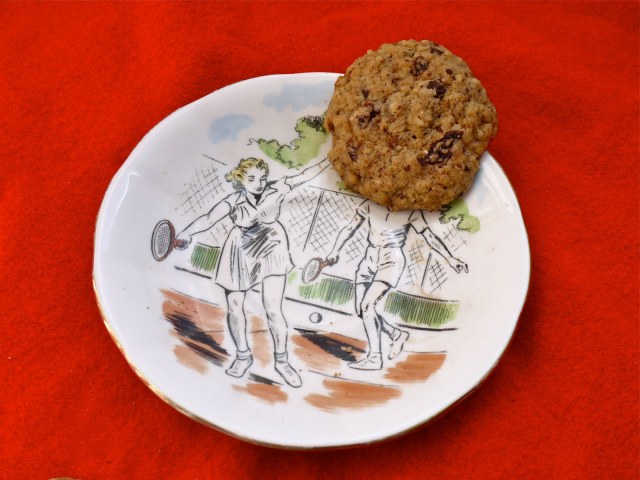 It’s a man with a cookie for a head!

FYI, that’s a jumper of mine under that gleefully ugly plate, and it occurs to me now that hopefully I don’t find any crumbs down my sleeves because that’s one of my least favourite things. And yeah, I do get crumbs somehow stuck in my sleeves enough to know I don’t like it (cookie crumbs hang around like sand once they get in your clothes, trust me.)

Yesterday Tim and I went to the extremely awesome Bookfair, put on by the Downtown Community Ministry who do heaps of good work in providing support to those in Wellington who need it. The Bookfair happens every year and it is so exciting. If you like books. Which I do. Tim and I scored some amazing finds this year. Like an ancient edition of Leonard Cohen’s The Favourite Game, the adorable 1952 edition of This Thing Called Ballet (“makes a plea for balletosanity as against balletomania” according to Daily Sketch), and a 1953 edition of Maori Grammar and Conversation, written with the Hon. Sir Apirana Ngata. Sure I can learn phrases and grammar from it, but as a slice of New Zealand history – for better or for worse – it’s a fascinating read. I also got a juicy stack of Cuisine magazines and am slowly filling the gaps in my collection from the past ten years. Feels so good.

Title via: De La Soul with Redman, Oooh, from their album Art Official Intelligence. I loved this song right away when I first heard it ten years ago – its mellow melody, awesome beat, and more-ish chorus. I managed to more or less memorise the lyrics after taping it off the radio, but then had to go to Google because I had no idea what stuff like “Brick City” meant…

Leonard Cohen’s So Long, Marianne from Songs of Leonard Cohen. It’s relatively lengthy at six verses, and also relatively upbeat as far as Cohen songs go. But by the time you get to the “I see you’ve gone and changed your name again” line, you start to feel all desolate because the song’s nearly over. Devastating from the lapping strum to quiet finish.

Sleepy Man, sung by the amazing Idina Menzel in 1990, when she would have been around 19. It’s a side we don’t often see from her vocals, and while the lyrics to this song from The Robber Bridegroom are pretty painful I do love it, so it was a total treat to find the link to this performance – especially as she was from well before she was on Broadway.

Next time: On the one hand, I’ve got all these Cuisine magazines to plough through and be inspired by, on the other hand it could be time to crack out that quince brandy I’ve had chilling in the cupboard…

16 thoughts on “better yet oatmeal cookies, y’all just rookies to me”