Winter has got me, and not in an epic, sweepingly-caped Game of Thrones kinda way (although, phew, look at that show’s very casual body count) but in the more unremarkable, throat infection kind of way. While I’ve been coughing at intervals during the daytime, I’m starting to wonder if there’s some chemical or hormone that’s released just as you’re about to drift off to sleep (perhaps to dream about being cast as Amy in Company, as my brain somewhat plausibly presented me with recently) which reacts with whatever’s happening in your throat. Because it’s at night when I cough the most. My brain is woozy and dozy, but my throat and lungs are wide awake and on fire.

So I’ve generously applied a tea made from chopped, carroty-fresh tumeric root and fibrous chunks of fresh ginger. I’ve drunk a lot of water, sipped Gees Linctus, eaten leafy green vegetables, and dissolved so many lozenges on my tongue that my teeth’ll probably corrode before the season is out…and also had some whiskey. Fingers crossed this elixir mix gets the better of my immune system soon.

In the meantime, here are the promised Coconut Macaroons – luckily, as in previous winters, I haven’t got a blocked nose and therefore no sense of taste. Those winters are no fun at all. I’d take a cough and no energy over that any day. I’d never tried these Coconut Macaroons before, despite owning How To Be A Domestic Goddess since 2006. But one of the many manifest joys of Nigella Lawson is that with her massive quantity of recipes, there’s always deliciousness anew to discover and love.

This is how much coconut they use…On the other hand, only two egg whites! These macaroons are less sophisticated than their French macaron counterparts, but they’re significantly less terrifying to make, too. 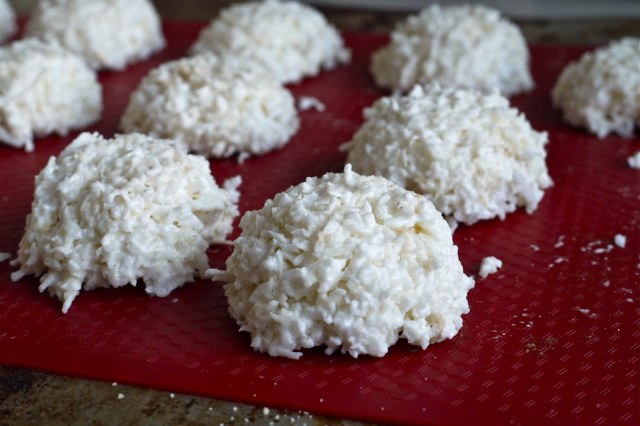 Set your oven to 170 C/340 F and line a baking tray with baking paper. In a non-plastic bowl, whisk the eggs till just frothy, then add the cream of tarter and whisk some more till you get soft peaks forming.

At this point, carry on whisking – fun! – while gradually adding the sugar a teaspoon at a time. It should eventually be thick and shiny, by the time all the sugar’s used up.

Now plunder all this gorgeous meringue-y hard work by tipping in the coconut, salt, extract and ground almonds, and fold together till you have a sticky mixture. I’ll tell you now: this mixture tastes amaaaazing.

Take a quarter cup measure, and scoop out cups-ful, dumping them down onto the tray. You should get between 8 and 12 out of this mixture. Bake for around 20 minutes, or until lightly golden. If you like, once they’re cool, drizzle them or swirl their bases in melted dark chocolate (around 150-200g should do this lot)

I love them. They’re satisfyingly large, pleasingly occupying both biscuit and cake territory, chewy with the fresh, summery taste of coconut and the bounty bar-echoing delight of their optional chocolate coating. They’re just seriously delicious.

With the lack of sleep that recurrent coughing brings, I’ve not been drawn towards anything with a heavy beat or a heavy meaning to process lately. Which is why Patsy Cline and the serenely beautiful Ali and Toumani album, for example, have been played a lot.

Next time: I found this amazing roast vegetable tart recipe, vegan and gluten free and delicious and everything. Hopefully will be blogging with a non-inflamed throat next time, too.

13 thoughts on “at sideshow stalls, they throw the balls at coconut fur”