The weather in Wellington has been particularly extreme over the last couple of days. It’s no time for skirts or dresses. Luckily I’ve got a super awesome bright red jumpsuit with power shoulders, gold buttons and palazzo pant legs. Don’t try and construct an image of what that might look like, just believe me on the “super awesome” claim. Especially when it’s worn with a turquoise scarf. Said jumpsuit has all the delightful flippiness of a skirt, with all the reassuring practicality of pants. On most days. Today the breeze rendered the crotchal-region fabric near-pointless as it continuously inflated my trouser legs so they looked like spooning hot air balloons. No major biggie though, were it not for my rapidly-sinking stockings. They would not stay up. There came a point where they were making their way towards my ankles just as my pant-legs were flying upwards. Taking advantage of the quiet side street I was walking through, I hiked up my stockings back to where they belong, around my waist. Doing the job properly, I was getting quite into it – lunging and wiggling and really luxuriating in the hoisting action till they were back up on my hips again. Finished, I look up, and see an elderly person, holding a video camera. Pointing straight at me.

The camera wasn’t sinister; I got the impression they were optimistically filming the nearby thoroughfare in case the wind caused anything strange to happen, so they could then pass it on to the humourous segment of a late-night news show so they could gain fame and riches. I…could well be that segment filler. Needless to say, my tights started sagging again immediately, but I didn’t hike them up till I was round the corner. I have my dignity.

I have come to the conclusion that I’ll never be intimidatingly cool, or even just intimidating and/or cool (either of which would’ve come in handy SO MANY TIMES in my life) but on the other hand…at least I’ve got some stories to tell. And you never need feel nervous about saying hello to me. Unless you’ve got a video camera and I’ve been lavishly adjusting my undergarments.

Also not intimidating: the recipes I have for you today. One, a simplified version of a beautiful Yotam Ottolenghi recipe – rice, mangoes, coconut, peanuts, chilli, mint – and the other, a little dish I came up with involving roasted cauliflower and whole spices and almonds.

I say simplified because I had so many moments of “well I can’t find that so I’ll use this” and “that’s a bit expensive, I’ll use this instead” and also I’m in bed and don’t have the mental capacity to get out of bed and find the Plenty cookbook. So this is my adaptation. A truly lazy dinner. You’re essentially cooking some rice and stirring stuff into it. But, as with any recipe of that tricksy and handsome man Ottolenghi, there’s so much beauty and freshness and bold flavour that it’s only you who need know how easy it really is. 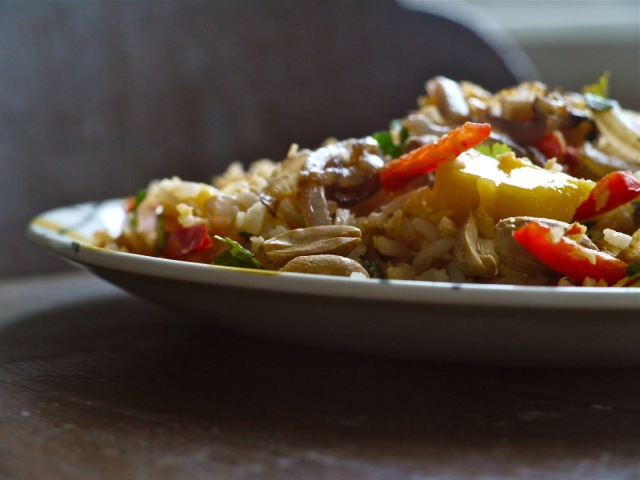 In a large pan with a lid, heat the rice grains in the oil for a minute or two, stirring a little to stop it burning. Tip in 2 1/2 cups water and a pinch of salt, bring to the boil then lower the heat, clamp on the lid, and leave slowly cooking away for about 15 minutes (although check for done-ness at 10). Allow to cool a little and tip into a bowl.

Roast the peanuts till darkened in the oven – it takes a little while but don’t ignore them. Fry the spring onions or red onion till crispy, thinly slice the capsicum and dice the mango flesh. Toast the coconut in a pan or spread it out on a baking sheet and use the same heat of the oven that you cooked the peanuts in, either way you want it to be light brown in colour.

Mix everything into the rice – carefully – and divide between two plates. Top with the herbs. 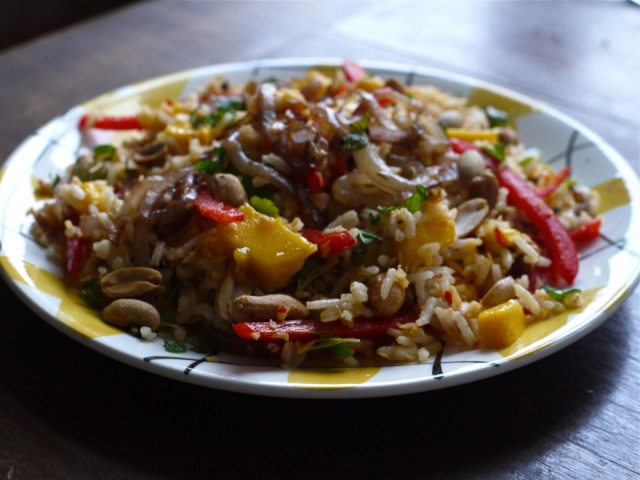 The right mix of raw and hot here – you’ve got the cooling, slippery, elusively fragrant mango and crisp juicy capsicum rubbing shoulders with almost-crunchy coconut, nutty (duh!) peanuts and the red chilli’s bite. Rice itself tastes beautiful – I don’t really appreciate it enough being a pasta fiend – but it really suits hanging out with these ingredients. Obviously it’s better if you can find shredded coconut but I promise the cheapest dessicated stuff will have its place once you toast the heck out of it. Cheers, Ottolenghi.

As for my recipe, Roasted Cauliflower with Toasted Whole Spices and Almonds it’s even lazier. Stick as many cauliflower florets as you like on a baking tray and roast them at a high heat – I went for 230 C, which is 450 F, till tinged thoroughly with brown. Towards the end – or even immediately after you turn off the heat on the oven – roast 1/4 cup whole almonds for five – ten minutes, till slightly darkened. In a pan, heat 1 teaspoon each of cumin seeds, coriander seeds, nigella seeds, and fennel seeds if you’ve got them. The two essentials are coriander and cumin, so play round if you like. Only do it for a minute or so, then remove from heat, stir in a shake of ground cinnamon and a pinch of salt, and tip onto a chopping board along with the almonds. Chop everything roughly (I’m not expecting much to happen here with the spices, just agitate them a little with the blade, it’s the nuts getting chopped that’s the main thing.) Arrange the cauliflower florets on a plate, drizzle with sesame oil, and sprinkle over all the nuts and seeds. Eat.

Viewed in close up, the seeds and nuts look all earthy and magical and like they should have the words “GAME OF THRONES” superimposed over the top (maybe just in my mind. How often can I use “it’s so late at night and I’m tired” as an excuse? All the times!) 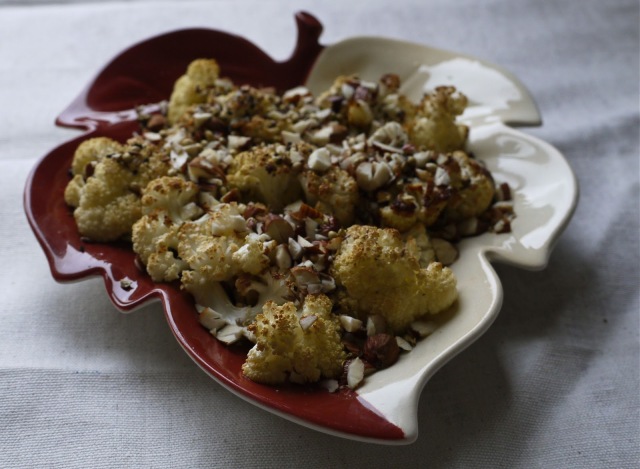 More importantly, it’s delicious – all that heating and roasting and toasting brings out everything good about the ingredients. Coriander seeds have this addicting lemony-bitter-numbing quality while cumin seeds are more pungent and warm (it’s also possible my spices are ancient) while cauliflower cooked in this way is nut-ular and crisp and its flavours are echoed pleasingly in the chopped almonds. 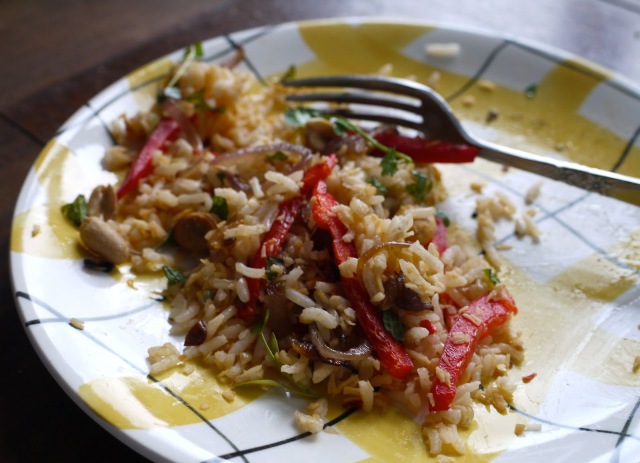 The weekend happened, it was good in places and intense in others. Had people over spontaneously on Friday night to farewell some lovely but impermanent Swedes that we’d become friends with, on Saturday Tim and I had a necessary coffee at Customs and exercised our democratic right to vote; later in the day we gathered with the sort of people you need round when the outcome of lots of people exercising said right unfolds. The night became the morning but somehow we had the energy to plough on with weekend-y activities, buying vegetables and having cider with Kate and one of us witnessing a much needed win from the Wellington Phoenix (clue: it was Tim) all finishing up by making the meal that I’m presenting to you now.

Title via: I’ve read sneering things about her, I’ve read hyperbolic things about her, but when Arular was released it was one of the most exciting albums ever to interest my ears and I’ve been into M.I.A’s music ever since. Sunshowers from that album is where today’s title gets itself from.

Over at The Corner there’s a two-part post on favourite Flying Nun songs (Flying Nun being an important New Zealand record label) which not only presented me with some brilliant writing but also plenty of unheard new-old goodness to listen to. Including Garageland’s Struck.

The Marvelettes, Mr Postman; I love how chilled and restrained and yet disciplined and sharp the singing is on this track.

Next time: Whatever it is, I haven’t made it yet. It could be another practical dinner, it could be a link to a video of “frowning girl adjusts pantyhose in public: The remix!” which could possibly do considerably more for my hopes to write a cookbook than actually working on developing recipes and so on.

21 thoughts on “i salt and pepper my mango”