If there was some kind of chart for overachieving in the field of cake, right now I woulds be significantly off that chart. The needle on its spectrum gauge would be teetering nervously out of control. (Can’t help but follow this up with “in my mind“, the hilarious-in-our-minds insult that Tim and I hiss at each other all the time after the other person says something implausible. Or even just something like, you know, “I have lots of friends!” “In your mind” – see? Effective.) Anyway, why all this self-directed hyperbole? I made up a Christmas Cake recipe. And it turned out pretty delicious, damnit. And then – I went and iced it myself too. 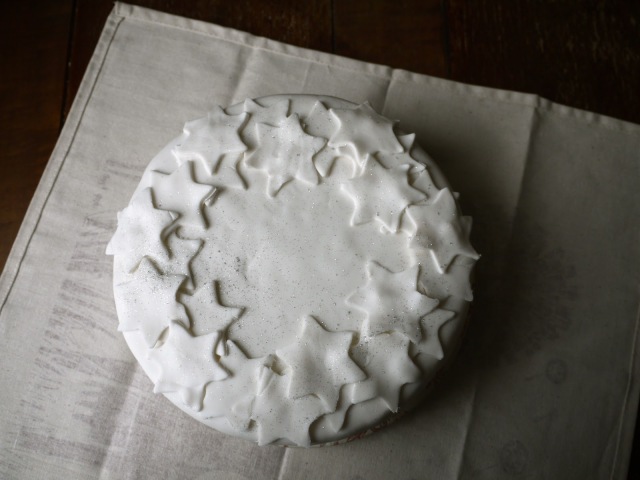 Aye, it’s only November, but not only is Christmas Cake the sort of thing you can make way ahead of time, like the overexcited person you may well be, it’s also good to be prepared. As that angry lion in the Lion King sang. And anyway, is the kind of cake you can make while it feels like you’re disorganisedly letting everything slide – it’s that easy. Even the icing is manageable. I know it’s divisive – I’m not personally the biggest fan of it, especially because marzipan costs about $12 for a small cube and so you have to use almond flavoured icing, for which not one single almond suffered in the making of. But it’s a fun challenge and you get to have this dazzlingly gorgeous cake to admire, eat, or pick up and reflect the sun off, to annoy the neighbours. 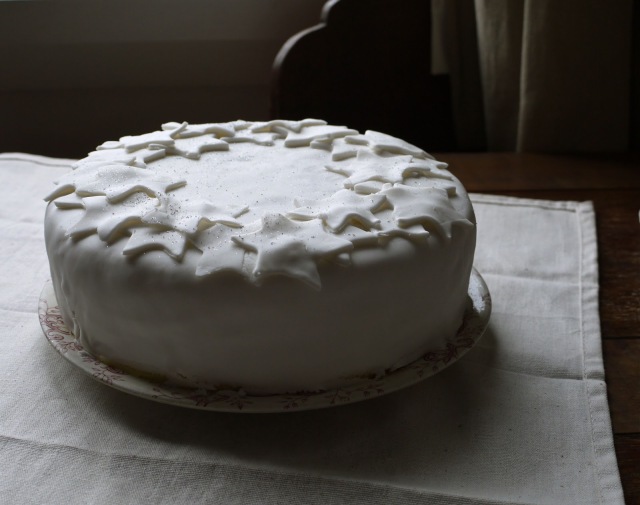 [Edit: awards voting now closed, ages and ages ago] You know what else is a thing? (Just watch me segue!) I got nominated in the Concrete Playground Bloggers Awards – “The Search For NZ’s Best Online Writers – under the Food Blogger category. Now that is a title I’d like to call my own. And thanks so much to whoever nominated me – too much. So kind. Yes, I’m up against some blogs you’ll likely recognise, but let’s talk about me here, okay? I feel like a bit of a veteran of the vote-driven competition, having been lucky enough to land myself in quite a few over the last year or so, but not lucky enough to actually win any. This is really cool, and I’d love to win it but I don’t want to burn my brain up too much over it, because losing’s no fun, on the other hand I want to definitely put myself out there because I believe in this blog – or I wouldn’t be up at midnight writing on it – on the other hand…

Pro: COOL TO BE NOMINATED
Con: Faking being stoic if do not win
Pro: Voting for people in competitions a now-normal part of life.
Con: Feel nervous asking people to vote for me…again
Pro: I really am one of the best online writer in NZ about food.
Con: In my mind…
Pro: You only have to vote once during the whole thing, not daily! Hey-ohh.
Con: Voting’s done through Facebook, so if you don’t have one…you get to dodge this whole hornet’s nest. So this con is really a sneaky pro for some of you.
Pro: COOL TO BE NOMINATED, FUN EXPERIENCE, CHILL OUT LAURA. One can still be the best food blogger in their own mind…for what it’s worth…

What I’m clumsily and bad-attitudinally trying to say is; though I’ve failed you all before, it would be really cool if you could vote for HungryandFrozen, but only of course if in your heart it’s actually the one you want to vote for. I would appreciate it with an embarrassing/refreshing lack of irony. Because seriously, NZ’s Best Online Writer? I want that! So if you do: vote here. (Please, thanks, and cake for all. Also you have to scroll round till you find my blog and click the “Like” which means, yes, you need Facebook.)

And I realise there are far more crucial voting situations going on right now. Am not going to talk about my opinion in that area, although it shouldn’t be hard to guess. But if you are in New Zealand please exercise your right to vote this Saturday – it’s one of the more important things you can do and I think back to all those who fought so that women could do this today. Your voice counts and you have the responsibility – think about everyone who you could affect with this and choose wisely. 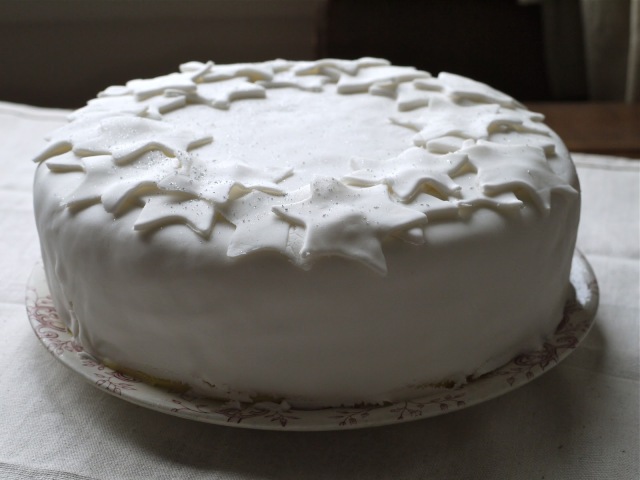 Back to the Christmas Cake. Fa la la la la. I’m looking forward to December this year actually – Tim and I have been stocking up on old-timey Christmas records (so cheap! I love that I always want the vinyl no-one else wants) and I’ve got plans underway for the best, more hard-out flat Christmas Dinner ever. I don’t want for much this Christmas, and our very short trip up home last weekend where I got to hang out with Nana and see so many people made me feel highly anticipational for some whanau time over lots of food.

I’d been reading through a lot of old, old cookbooks and Nigella’s books and all sorts of cookbooks, and my braincells were tickled by all the variations on Christmas Cake. I was really keen to try adding my own to the squillions of recipes already out there – a kind of mash-up of all the things that sounded fun about other Christmas Cake recipes. So I included a whole can of condensed milk, because having that on the ingredients list pleases me. I soaked the fruit in ginger beer and rum – Gunpowder’s – spicy and intense – because how cool does that sound? (Are you starting to see a pattern emerging here? I’d see an ingredient, think “funnn” and that would be that.) I used dried pears which sounds extravagant, but it’s more stupidity on my part, I bought them once on the supposed insistence of Nigella Lawson, ended up too fearfully nervous of how much they cost to make anything with them, and now they’re nothing like the plump, full-of-potential specimens they started as. However, after a bathe in some rummy ginger fizz, they’re perfect for a fruit cake. You could use apricots, dried apples, or anything within that realm of wrinkly fruit, really.

I followed a decoration idea of the aforementioned Nigella’s because the gleaming white-on-white look appealed to me, and I also liked the lack of fuss involved in haphazardly piling up star shapes on each other. And then topped it with edible glitter because it cost about $9 for the tiny tub and I’m trying to insist it’s highly relevant to many things that I bake and cook on a daily basis and I’m becoming increasingly drawn to glittery things these days, like a magpie. (Thought: If you painted a magpie’s nails with glittery nailpolish…would you break the internet?)

The real question is: did it taste okay after all that? Can you really just go making up a Christmas Cake? Bit of a concern, considering how much fruit and nice liquor and time and effort and so on went into it. Luckily – BRILLIANT. Like, deck the halls with boughs of deliciousness. 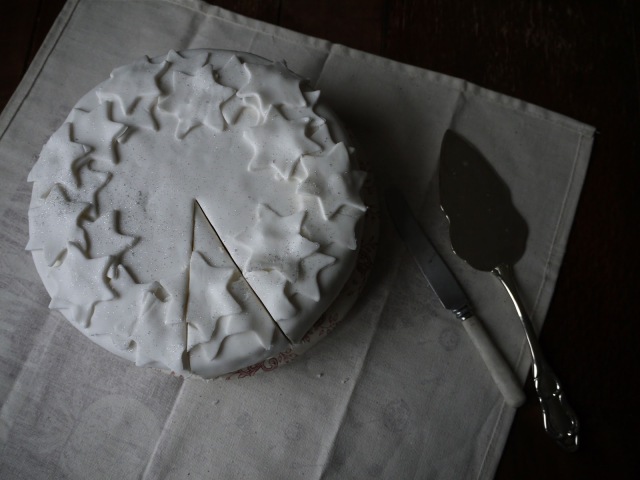 And even if it turned out tasting like rum-soaked sawdust, it is pretty. It’s a tall, but surprisingly light cake, as far as this kind of thing goes, with a distinct caramel-toffee vibe from the condensed milk. Strangely the ginger wasn’t as prominent as I thought it’d be, but the dark rum definitely makes itself felt. The dried pears give a fudgy, grainy sweetness, and the sultanas are, well, they fulfill their role of being a sultana (is anyone passionate about the sultana?) All the little things – the cocoa, the cinnamon, the orange oil – mesh together to form this mysteriously tis-the-seasonal flavour. All up: It worked!

Dunno how the pencil got in there. It’s…artistic?

Soak your fruit overnight (at least) in the liquids. I’d say there was 1/2 a cup of liquid left when I made my cake so if you’re nervous, drain out that much and discard/drink the rest.

Take a 22-23cm caketin, line the base with a double layer of paper and then, as best you can, line the sides with a double baking paper which extends about ten cm above the edge. Pulling out a long piece of the paper, folding it in half, making it into a loop and then shoving it into the caketin and hoping for the best tends to work for me.

Melt the butter, sugar, condensed milk and spices together gently. Remove from the heat, stir in the fruit and its liquid and the baking soda. It might fizz up a bit at this point. Beat in the eggs then carefully sift and stir in the flour, making sure there’s no lumps. Tip into your prepared tin, and bake at 140 C for around 2 1/2 hours. Pierce it at various intervals with either a cake tester or a piece of dried spaghetti and tip over a capful or three of rum.

Title via: Queen of my ear canals, Mariah Carey, with the immortal All I Want For Christmas Is You. Will we ever see another modern Christmas song that’s as good as this? Doubties.

Reach Out (I’ll Be There) – Four Tops I probably mention this song once a month, but I think for a song like this it’s okay. Frankly. And I love the “RAH!” at the start of each verse.

Idina Menzel, Heart On My Sleeve. If you can’t bring yourself to vote for me, at least indulge me by watching this entire video from start to finish – it’s slow but so beautiful and never fails to make my tear ducts spring into action.

Next time: Probably hounding you respectfully for votes again, but also aiming for some cool recipes you’ll want to try immediately.

23 thoughts on “i don’t want a lot this christmas, there is just one thing i need…”