June 11, 2013March 11, 2020
I don’t mean to deliver this like it’s candlelit-vigil level news, but the following exchange happened late last week:
Tim: we’ve exceeded our 60 gigabyte monthly internet bandwidth allowance.
Me: *dramatic gasp* No internet? But I’ll be insufferable.
Tim: I know. I know.
I mean, a breezy and heedless thank goodness for 3G on smartphones, but still, I’ve had to write this as hastily as possible, in the knowledge that we get charged significantly extra for every gigabyte over the monthly allowance that we use. Just keep that in mind if there’s, I don’t know, any tiny thing you don’t like ever. This is my excuse.

This is how we do it.
I also don’t mean to deliver the following like it’s two-roads-diverging-in-a-yellow-wood level news of life-changing significance, but Tim and I have been in our house for around six months now, and only just had our first dinner party on Monday night. Not to harp on like some kind of harp about Game of Thrones, but this dinner party was in honour of the season three finale last night. Spoiler alert: some bits were all “whoaaa” and some bits were all “um, ugh, awkward white saviour moment”. I do love this show, although many’s the time after particular treatment of women within it that I have proclaimed myself absolutely done with it. And then I keep coming back, because it’s possible to enjoy something and have major problems with it at the same time. But if nothing else, it gave us an excellent opportunity to have our first dinner party in our now not-so-new house, in the form of a twelve person potluck. And it was wondrous. Quesadillas, Balti curries, roast butternut salad with tahini dressing, potatoes with caramel and prunes (oh Ottolenghi, you maverick), orzo salad, spicy pumpkin pie, and my offerings, a kind of grilled courgette and couscous layered dish covered in tomato sauce and capers, and these baked pears.

Baked pears with almonds, chocolate, and rosewater. I was deeply impressed with myself at how they turned out, in that I thought them up on Monday afternoon and hastily made them just before everyone arrived. Then maybe had just one too many wines during dinner to be truly effective, and almost forgot about them till halfway through watching the show itself. Luckily Tim reminded me about them at what turned out to be their optimal cooking time. I’m so used to screwing up recipes that I make up on the fly lately, so was really pretty prepared for these to be awful right up until the moment that I had my first bite. But they worked out perfectly. Serendipity makes everything more delicious.

What also makes everything more delicious, is when it’s ridiculously delicious. Pears have this sweet perfumed mellowness which the touch of rosewater and almond helps subtly amplify, like the Rise filter on Instagram. Everything caramelises and intensifies, but covering the dish with tinfoil means that the chocolate doesn’t scorch and the pears stay juicy and yielding. So you know, these are quite, quite amazing the next day for breakfast, cold from the fridge with cream poured over.

The way these came about in my head was that I wanted to make something vegan for pudding, to accommodate friends, but also wanted something fairly luscious and rococo to go well eaten alongside an HBO fantasy show with an enormous budget and phrases like “good brown ale” and “I will take what is mine with fire and blood”. The secret ingredient here is tahini, which ties the ingredients together with an accommodatingly nutty, rich backdrop of flavour.

Recipe by myself. On the one hand, these are some slightly high-falutin’ ingredients. On the other hand, pears are maybe a dollar a kilo these days.

6 ripe pears
Half a lemon
2 tablespoons brown sugar
2 heaped tablespoons tahini
1 x 70g packet ground almonds (this is how they come in New Zealand, anywhere between 50-100g would be fine if you can’t specifically find this amount.)
2 teaspoons rosewater
25g dark chocolate (I use Whittaker’s Dark Ghana, which has no dairy in it. And is wildly delicious.)

Set your oven to 180 C/350 F. Slice each pear straight down the middle vertically, trimming off the nubbly base and stem as you please (because little would be more shuddery than accidentally eating either.) Use a teaspoon to scoop out the seeds and a little flesh to create a hollow for the stuffing. Mine were entirely asymmetrical, so don’t worry about looks at this point. Lay the pears, cut side up, in a roasting dish and squeeze over the juice of the lemon. This will stop them browning while you make the stuffing but also helps complement the rosewater flavour.

Carefully mix together the tahini, sugar, and rosewater – tahini can sometimes be ridiculously thick and un-pliant, so expect something that eventually looks like cookie dough – then roughly, coarsely slice up the chocolate into shavings and chunks and stir that through. Using a teaspoon, fill each pear hollow – really packing it in and heaping it on – with the stuffing. This should make the perfect amount for 12 pear halves, with an extra teaspoon or so for nibbling on. Cover the roasting dish with tinfoil and bake for around an hour, or until an implement slides easily into one of the pears. Like Valerian steel into one of the endless parade of now-dead characters on Game of Thrones. 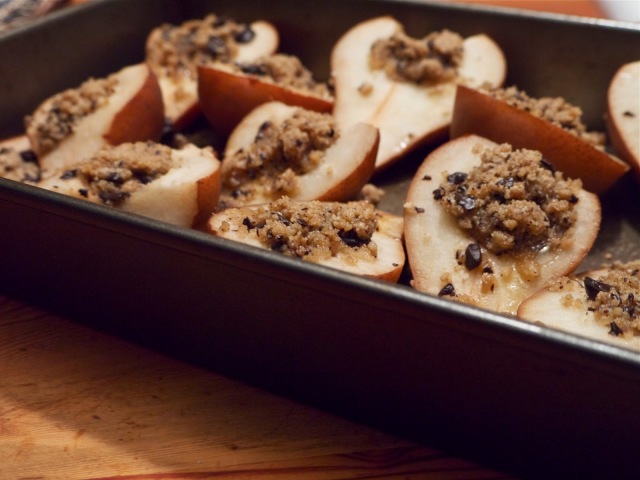 Last week was a series of ups and downs, the downs being I was sick with some mysterious sore throat and zero energy affliction, the ups being Tim and I went to the Visa Wellington on a Plate launch and mingled energetically with incredible bread and butter, lots of cool people, and the beauteous Garage Project dogs (you can see them on the event’s website, and perhaps understand why I ended up taking so many ‘best friends!’ type selfies with these hunds). Despite my jangled nerves at crowded social events like this – I’m an all or nothing mingler, either doing it with aplomb or awkward horror – It was a very, very fun night and the programme looks utterly bananas. Judging by my casual flick through it, it’s going to be a very good time to be in Wellington. The streets will be paved with halloumi and local chocolates.

Back to the downs, I’m still not sleeping any better – if anything it’s getting worse. I woke up at 3.45am today, just casually awake. I take longer and longer to sleep, but wake up around 5am. On the weekends, with no alarms and no surprises, I find my eyes flying open at 7am. Which is technically a decent sleep-in by my standards, but still. On the other hand I’m not sure if it is getting worse or just swirling to a climax, as I look back over the last few years and am unsure if there’s a time when I ever slept well. Are there night classes in sleeping? Oh, wait. (Don’t worry, I’ll go see a doctor about it or something.)

But then back to the ups, I did, as promised a while back, start learning to knit and I adore it. It’s so soothing and quiet and repetitive and tactile and also very fun watching the creation (thus far: an oh-so-slightly wobbly square which will become a blanket) slowly grow like a soft wooly plant.

Also on the ups: bought some sriracha. The cool thing about sriracha is that it’s very instagrammable and cool and people perk up and say “ohhhh I’m addicted to that stuff” if you mention it (like Game of Thrones!). But also it really is incredibly addictive, slightly tangy hot chilli sauce, and I can’t wait to pour it on everything. (Which: seriously, what is life. On the downside I never ever sleep but on the upside I have a small bottle of nice hot sauce.)

Posing? Me? Well, often, but I really am eating sriracha in this photo. Cinema verite!

Demi Lovato, Give Your Heart a Break. Perfect, from the slicey uplifting violins to the flawless chorus.

Brigitte Bardot, Moi Je Joue. I followed a link to this song from The Moveable Feasts, a food blog I love, and was rewarded with this adorably scrappy, impetuous delight of a song.

Leave a Reply to Phil in the Kitchen Cancel reply