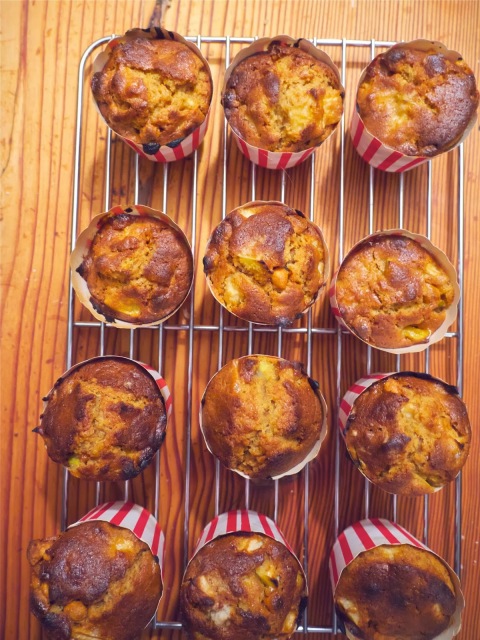 apple butterscotch chip muffins
Initially, I was concerned that I’d been so busy I might not have time to cook anything I could even blog about. All you need is one party here and one catch up there and one overtired unhungry evening and a weekend and…suddenly you realise you’ve eaten naught but candy love hearts and coffee for three days. Or at least, I realise that.
And then my concern changed into the shape of fear that this recipe would be off-putting, because it has the irritatingly specific butterscotch chips in it. But I figured you could joyfully replace them with white chocolate.
And then, the biggest concern of the three – I realised, deflating like a sad balloon all the while – I’d already blogged this recipe back in 2010.
As Homer Simpson once said: It’s like something out of that twilighty show about that zone.
Also more specifically: d’oh!
Also less specifically: mmm, sacrelicious.
I just really love Homer Simpson quotes, and relate to him quite a lot. (Him and Lisa.)
To add to this increasing whirlpool of misadventure was that I then didn’t sleep the entire night – well, I slept for fifteen minutes, around 7am the next morning, but that’s all. Truly. At 3.30am I started writing this blog post obstinately anyway, in the face of all that doubtfulness. It seemed better than the alternative – staring at the walls in the dark. Sure, I’m feeling reproachful of myself for not being able to produce one single thing to blog about, but doubly sure I also have no time or brainspace, and c’mon, I gave you halloumi fries last week. Doesn’t that allow me some beatific laurel-resting till around the year 2017?

So, uh, admittedly the recipe hasn’t changed, but for the butterscotch chips instead of almonds. Said butterscotch chips were purchased from Martha’s Backyard, this amazing American foodstuff and stuff-stuff supply store in Auckland, where I also bought liquid smoke, three large boxes of nerds, and a bunch of fake plastic roses, all in black. For Hallowe’en, or whatever occasion seems fitting sooner. The butterscotch chips are fun, but not essential – they have an oddly artificial smoky caramel flavour and terracotta hue, but work with the juicy chunks of apple and warm cinnamon.
Muffins are so easy to make – for one thing, you barely have to stir the mixture, in fact the less the better – and also they take hardly any time in the oven. Just enough to make your house smell snugly of cinnamon. They’re a lot smaller than your usual muffins from a shop, but they also have a tenderness that mass-produced ones tend to reject in favour of adopting the texture of a foam shoe insole. For a beige shoe.

These are just really delicious and comforting, and handle being frozen and then microwaved back to life as snacking needs dictate. And in case you missed it, again, the recipe is here. From…2010. At least it was late 2010!

Had a Campari and grapefruit cocktail during a last brunch before dear Kim and Brendan travelled overseas for seven weeks.

Started knitting a beanie with the leftover yarn from my cape. I just found a pattern online and worked out how to ‘read’ it, and started knitting. I’m very proud of myself for this progress.

Ate floor pizza and wine for Sarah-Rose’s birthday. Strewed nerds candy hither and yon, but luckily mostly into my own mouth.

Went to my first ever No Lights No Lycra. Just dancing around in the dark for an hour: it was euphoric.

In most pressing news, changed my usual eyeliner from flicky to overloaded and smudgy (this is probably the most important thing I’ve ever said on this blog.)

AND: I’ve been in cahoots with Delaney to plan my Auckland cookbook launch next Tuesday! The venue is only wee so if you’d like an invite for yourself or someone else, just email it and I’ll send it your way. I’m really excited – I get to make another speech! Come along! It will be fancy! If I have to say the word fancy once every five seconds!