So if the brief you’ve given yourself is “food that will feed yourself and a significant babe and be impressive but not too over the top and look rad but not intimidating and be delicious but also interesting and be filling but not send you immediately to sleep and will go with beer or literally whatever alcohol you just bought from the corner dairy”, I have you quite, quite covered here. I made these last week in response to said brief, but have taken forever to blog about them owing to tiredness, busy-ness, and uselessness. But the greatest of these is uselessness. (That was an attempt at a bible pun, I’m not that hard on myself – oh no wait, I actually am, now that I think about it.) Seriously though, they’re so good and I want to make them all the time just for myself, let alone other deserving parties, while the weather is sunny or thereabouts and eggplants are not wince-makingly expensive: grilled eggplant rolls with feta, pomegranate, and mint.

The fiddly bit comes from having to toil through frying up all the slices of eggplant first. The actual rolling up part is weirdly easy, perhaps because it’s okay if these end up looking a tiny bit tumbledown and if some of the filling falls out (which the pomegranate seeds are wont to do), as they’re made to be gracelessly eaten by hand in a very I’m-a-carefree-dreamboat-in-high-summer kind of manner.

I’m a bit all-a-flutter because I’m heading up to Auckland on Sunday for Laneway festival the following day, I have not been since the very first year it was here in NZ and it’s so very exciting. Cool festival costume to decide upon! Cool festival costume to frantically change my mind about seven times! Amazing musicians to see! Fancy old Auckland to feel like a gawky provincial rube in! Friends! And then my dad and brother share a birthday a couple of days later (how considerate) and since I was working here over Christmas I’m totally looking forward to being able to at least be up home for that. And also to try embarrassingly hard to make my parents’ cats like me. But like really the line-up for Laneway this year is completely dreamy and I can’t wait to sway under the setting sun to FKA Twigs and St Vincent (good name, that) and Angel Olsen and to try to not dissolve from said dreaminess in the process.

this makes enough filling to eat heaps of as you go AND fill the eggplant slices AND stir the leftovers into a bulghur wheat salad.

Am also all-a-flutter over these eggplant rolls because they are just hellaciously delicious. It’s loosely based on a recipe from Nigella Lawson’s wonderful and underrated book Forever Summer, and the pomegranate seeds were my idea – their juicy fragrance and popping candy texture is amazing against the creamy feta and the oily, soft, scorched eggplant. It brightens it up no end and importantly, looks kinda gorgeous – I went on for a bit in my last blog post about how jewel-like and magical pomegranate seeds are, and that opinion is no less relevant here. As well as adding glorious flavour and texture, you sprinkle these damn beauteous seeds over the serving plate and it instantly makes it look like you’ve casually garnished your meal with actual twinkling rubies. I don’t know, maybe I’m just very easily impressed. By garnish. But still. 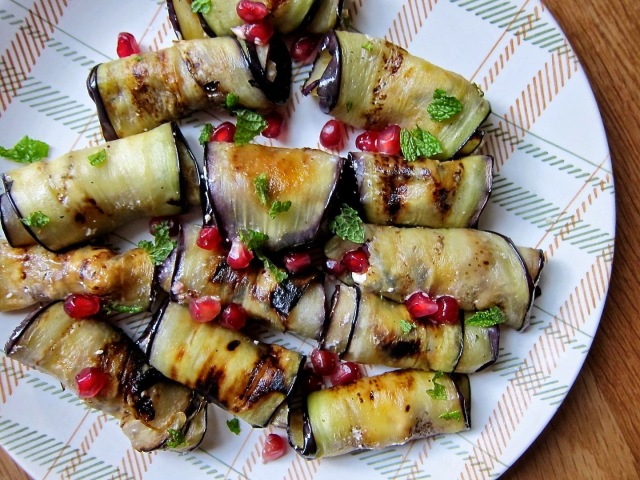 one eggplant
one pomegranate
120g (or so) feta
two tablespoons olive oil plus extra for frying
three tablespoons of mint leaves, finely chopped
a pinch of cinnamon
a pinch of sumac
salt, to taste

Slice the eggplant as finely as you can manage lengthways. There’s no easy way around this, but if you faff it up somewhat you can sort of stick two half-pieces together and roll them up so it’s all good.

Mix together everything else in a small bowl with a fork, roughly mashing the feta as you go. Reserve some pomegranate seeds and mint for scattering over the serving plate.

Heat a heavy pan over a high heat, and brush each slice of eggplant on both sides with a little olive oil. Place a few slices next to each other in the pan, and allow to get browned and softened before turning over to cook on the other side. It doesn’t matter if they’re perfect, as long as they’re not, like, raw. Once you’ve done all of them, lay a piece of eggplant on a board, place a small spoonful of the feta mixture at one end, and roll it up lengthways. Place it on a serving plate and move onto the next. It doesn’t matter if they’re a bit roughly done or if bits of the filling fall out, because…it’s all so delicious. Carry on until all the eggplant slices are used up, sticking two together and carefully rolling them into one roll with any scrap slices if you need to. Scatter with the mint and pomegranate, drizzle over a little more olive oil if you like, and you’re done. 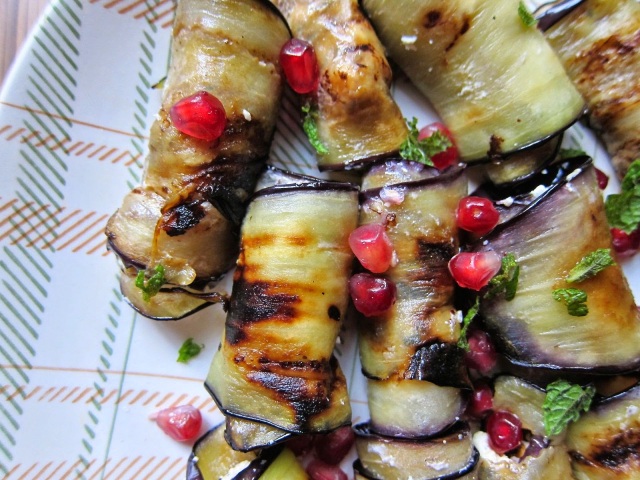 Also to hark back to something I mentioned in my last blog post, I’m still in a “moving house soon” state, which is going to come really rushing in on me when I get back from Auckland next week. I’m sensibly approaching this life-changing event by completely ignoring the concept of packing my possessions into boxes and instead drifting about on Pinterest finding articles with titles like “You’ll Love These Forty Exciting Ways With Fairy Lights” and “29 Cosy Bedroom Concepts You Can Make With Just Paper Cups and A Prayer.” Just being my usual inspirationally sensible and pragmatic self.

Speaking of sensible and pragmatic I think I’m literally addicted to dying my hair with semi-permanent colours, and since my hair is so pugnaciously healthy and strong it seems to be taking this colourful thrashing quite well.

Currently vibing with smudges of pinky blue amidst icy blonde, and next up I think I’m going to go for minty green, maybe with pink tips? It’s so fun! (Despite what my blankly distressed face in this photo would suggest, that’s just my Strongly On Brand Lack of Smile.) Everyone, go dye your hair! Or at least give a jaunty and affirmative “nice hair!” to someone having fun dying theirs! Making sure they catch your pleasant drift and it doesn’t sound like you’re cat-calling them lasciviously!
_

title from: Kesha, We R Who We R. I sodding love this gal. She’s wonderful.

Drake, Headlines. Here’s what I have to say about Drake: Draaaaaaaaaake.

The Libertines, Can’t Stand Me Now. This song is kinda sad and adorable at the same time, with its push-pull and “no you’ve got it the wrong way round” and it’s both dated and ageless which is a completely lazy way of describing it but I care not.

Next time: I don’t know! Maybe I’ll make something cool while I’m up home! Maybe I’ll be too busy being uncool in front of the cats.