cornbread cookie squares with maple buttercream: whoever named this was being paid by the word amiright?

It took me so stupidly long to write this post that I’m pretty sure I hit diminishing returns ages ago: two attempts to write were lost to persistent and heavy naps, a jolt of energy from seeing the Blood Moon last night after work had me writing enthusiastically at 1.30am, and then between daylight savings and my body’s truculent inability to sleep when it ought, I was up at 7am today determined to finish this damn thing and not let it drag out any further.

So! It’s April! It’s Easter weekend! I love Easter so much – chocolate is in season, it’s a holiday but you’re not obliged to get anyone presents, it’s usually kinda cold and snuggly in the weather department, and the days off cut into not one but two short weeks. It’s a bit weird that you can’t buy alcohol on Good Friday or Easter Sunday, but it’s nice that more people than usual get a day off or something close to it. Seriously though, the alcohol thing is so weird. Some American tourists at work asked me why we have this rule and I could not think of a decent reason.

April also means that my birthday is fast approaching, and I hope you’re all preparing appropriately (harvesting feast ingredients, staying up late to make garlands of flowers, making offerings to the full moon, attempting augury “just because”, praying to Lucy Liu.) I’m continuously baffled that I’m turning 29 entire years of age and it’s not just an elaborate Truman Show-level prank where I’ve been lied to this whole time and I’m actually only turning 24. Like, as if I’m nearly 29. What a ridiculous and vulgar notion. Realistically though, it’s…going to literally happen. 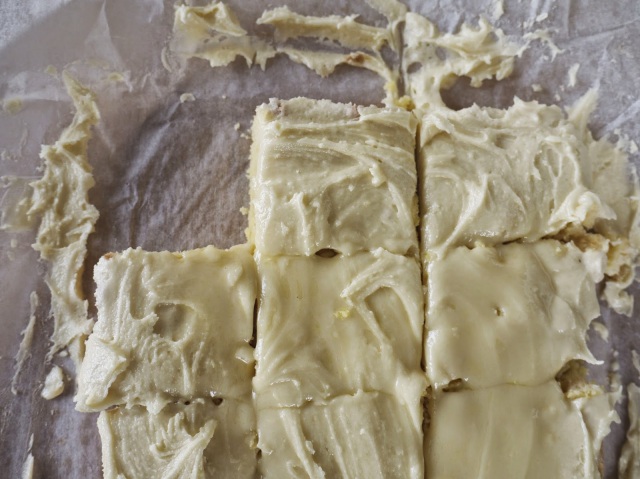 I ate that missing piece, quite joyfully

While my imminent birthday only intensifies my usual “what is my life” and “what does it meeeean” and “what even am I doing” vibes, I am cautiously reckless with optimism on account of my tarot card for April. It is the deliciously full-of-promise Nine of Wands – nine is my lucky number, and it signifies lots of good things like overcoming fear and doubt; achieving things I’m working hard at; letting go of struggles from the past; and just generally thriving and living my best life. So far in April all I’ve managed to do is go to work and nap and berate myself for not blogging or tidying my room, which is not quite as thrivey as I’d like to be, but I did do some baking and deliver it hither and yon to good people (my girlfriend, my dear Kate, my friend Jen, my own face) so I can ride on the coattails of this small accomplishment for at least another week, I daresay. The thing I baked bears the faintly irritating name of Cornbread Cookie Squares with Maple Buttercream (like, could this name be trying any harder?) but it’s so very good, so very easy, and, like all things I make, so very delicious. 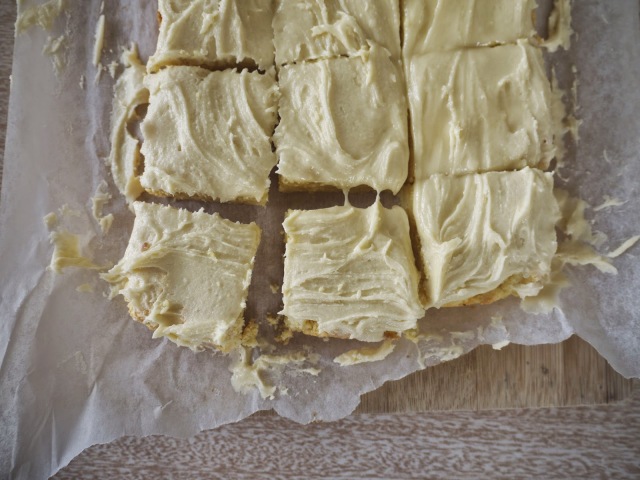 I just realised that I kind of named this since I adapted the name to fit my adaptation of the recipe so way to backhandedly mock yourself, Laura

Despite the word cookie in the title it’s basically just an iced slice, but tinged with sweet gritty cornmeal, which makes it a little different and unusual without distracting from its comfortingly recognisable cake-ness. I saw the recipe online while undoubtedly dicking about distracting myself from necessary tasks, and it was one of those serendipitous moments where I knew I had all the necessary ingredients on me and could spontaneously make it without having to buy anything. That’s a good enough reason for me, plus I just haven’t baked in a while, but I was also curious as to how it would incorporate cornbread vibes – cornbread being one of my favourite things to eat – into something sweet. I changed the recipe a bit to suit my needs (example: anything that calls for one egg plus one egg yolk, which the original recipe did, makes me feel very tired for some reason, so I left out the extra egg yolk and added in more sour cream) and threw it together with charming ease and speed on Tuesday afternoon, and insistently recommend that you try it too sometime.

adapted from this recipe. Also I used maple-flavoured syrup because I am a monster or something.

Beat the butter and sugar together till light and creamy, then add the egg and sour cream and continue to beat energetically for a bit till it’s well mixed in and everything is even lighter and fluffier. Gently stir in the cornmeal, flour, and baking powder, which should result in a damp, dense, slightly crumbly cookie-dough type mixture. Tip it into the baking tin and press down gently with the back of a spoon or your fingertips until it’s evenly spread out. Bake for 15-20 minutes (check at around 18, I recommend) till it’s golden and a little puffy. Allow to cool completely before icing thickly.

To make the icing, beat the butter and the maple syrup together, then carefully add the icing sugar (it’s so light it tends to get flung out of the bowl easily in a cloud of dust, but maybe that’s just me) till you have a thick, lush-looking icing. Spread it evenly over the cooled cake-thing, and then slice into squares. 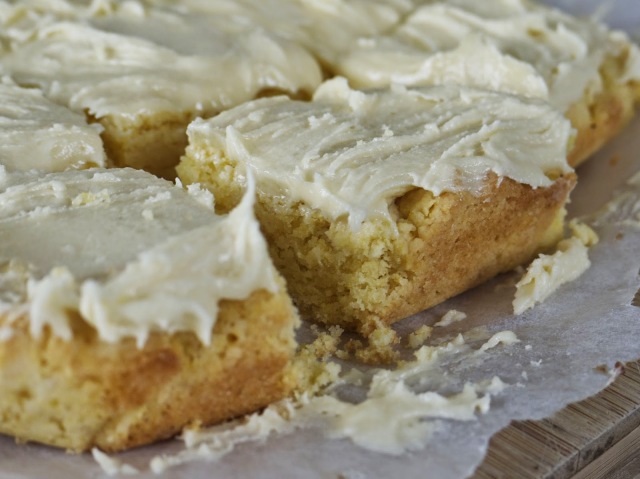 It’s so cakey and dense and moist, yet firm and cookie-like, yet legit cornbread-ish, with the thickly spread icing jolting you with sweetness and lifting up all cornmeal’s sweetness lurking in the base. The original recipe calls for honey in the icing, but I thought something with maple would give it a charmingly smoky intensity, and vigorous researching would suggest I am correct. It was so easy to make and so utterly rewarding and tastes so stupidly lovely, I can see this becoming ever so firm a fixture of my baking repertoire. 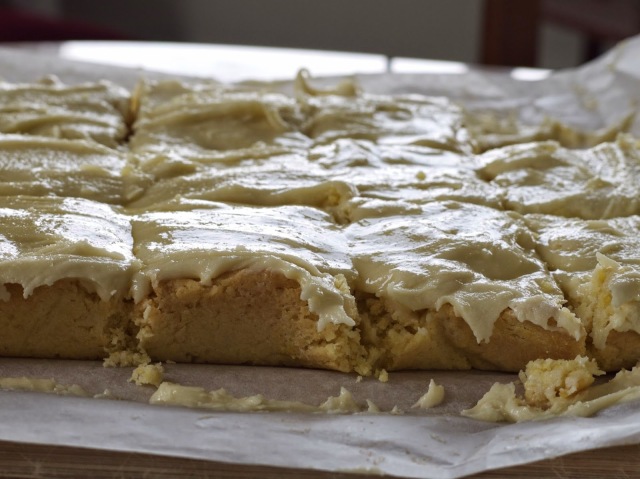 to eat it or to lie down face first in it: that is the more interesting question Hamlet quite frankly

I guess I’d better wrap this up now before I end up taking the entirety of April to write this wretched post; especially when I could be much better put to use doing things like “thriving” and “oh my god do some laundry Laura” and so on. One properly productive thing I’ve been doing is continuing to put in work on a recipe list for a hypothetical Brilliant Second Cookbook, so I can be astonishingly ready should the opportunity arise.

also being productive taking many selfies (the grubbier the mirror, the closer you are to…cleaning your mirror hopefully)

Also am being the most productive of all watching Buffy with my former roommate Ariel (and Kate.) Hanging out with a cat (and a Kate) is truly living your best life! Unless you’re near a dog too: then you frankly could not be more blessed. April, you’re giving me high hopes.

title from: The Song of Purple Summer from the musical Spring Awakening. This song is so sad and beautiful and the harmonies ache, and if you can stand it/care at all you should definitely try watching the bootleg from Lea Michele and Jonathan Groff’s last performance on Broadway, the harmonies go even harder and I for one SOBBED HEARTILY.

The Magnetic Fields, California Girls, I love a good scuzzy scuzzball of a song like this.

Allison Stone’s gorgeous Landlocked EP. At first all I knew was that she was excellent on Twitter but it turns out she’s also SUPER excellent on singing.

next time: my mum sent me some 85% dark chocolate in the mail (tis the season to chocolate!) and so I might try making something cool with that? Also going to attempt to not nap so much while I’m trying to write.

5 thoughts on “the earth will wave with corn, the gray-fly choir will mourn”