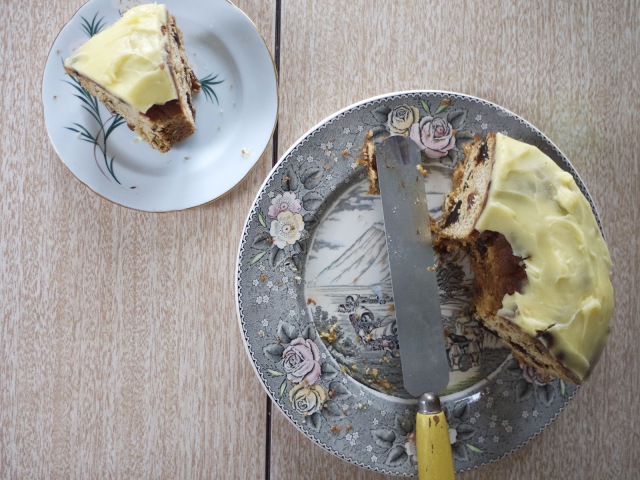 There’s nothing like lovingly taking photos of a cake on your camera and then sticking the camera’s SD card into your pocket and then losing it somewhere in the street to hinder the blog post writing process; luckily for me should anyone find it there is only cake photos on there and nothing incriminating (all my photos of me holding up signs saying “I just robbed this bank!” while pointing to a bank are on another SD card, phew!) but it was one hell of a pain to try and take photos of the cake again when I’d since demolished so much of it directly into my mouth. I managed to take a few hasty photos of what was left of it and found a couple of grainy-like-sugar snaps on my phone, but yeah, consider yourself warned that these photos aren’t my best work, and my best work is in fact dissolving in a puddle somewhere between Newtown and Wellington central.

caught by the fuzz(y photography)
But at least the cake itself was good, and what a name: Bobby Dazzler Cake. Bobby Dazzler Cake. I found the recipe carefully written in the back of a cookbook belonging to one of my great-grandmothers (a smartly bound Aunt Daisy book with my great grandmother’s name embossed in gold on the cover, fancy!) I was utterly smitten with the name before I even saw what was in the cake itself. You know when you hear a word or a phrase for the first time and then suddenly you see it everywhere? That happened to me with didymo, although it only occurred to me recently that it was probably because there were suddenly all these “watch out for didymo” campaigns everywhere and previously there hadn’t been (once more for the people in the back: didymo! A satisfying word to say, even if you have to Watch Out for it.) But uh, sometimes it feels like more of a coincidence than that, in this case my excellent girlfriend and I were watching the terrible/amazing miniseries Tipping The Velvet and one character exclaimed to the other, “you’re a real bobby dazzler.” I was thoroughly taken with this phrase and while I initially assumed it was some secret Victorian-era glasses-waggling code, like “she’s civic-minded” or “she stands up on the night train” or “she’s remarkable” it turns out it simply means something along the lines of “the cat’s pyjamas” which makes it no less delightful. Anyway, mere days after seeing this show, I discovered this recipe, in this book I must have read dozens upon dozens of times, and I knew it was a sign that I should bake it with immediacy.

The recipe was written in that type of handwriting that was probably considered terribly neat and full of propriety sixty years ago, and is entirely unintelligible nowadays, not to mention all in imperial measurements – a pound of this and a pound of that – and finally, as was the style of the time, it trails off mysteriously halfway through and doesn’t give you any detail about how to mix it, what temperature and how long to bake it for, or indeed what sort of tin to put it in. There was so much that you just had to know back then! In the spirit of trying to just know stuff, I made some presumptions and biffed it into a ring cake tin and baked it for an hour at 180 C, or what Aunt Daisy might’ve cryptically referred to as “a good oven”.

And it turned out splendidly! The mixture contains a resolutely old-timey mixture of prunes, grated carrot, grated apple, and sultanas, as if it’s trying to be five different cakes at once, but you get a kind of moist fruitiness that’s very comforting, the sort of cake you want to have with a large pot of tea while the rain dashes at the windows (a very easy scenario to come by in Wellington these days as we approach the middle of a neverending winter.) Honestly, when (when! Not if!) I make this again I’ll increase the apple and carrot quantity to two, and dice the prunes a lot finer – the former sort of dissolved into the cake while the latter were all like “here I am! Prune! In your face!” I’d also use brown sugar instead of white, just to hold all that fruit together with a slightly more darker caramelliness. But honestly, this cake was wonderful, especially when I spread it with a thick cream cheese icing.

adapted from a handwritten recipe from my great-grandmother

Set your oven to 180C/350F and generously butter and flour a ring/tube cake tin. I say generously because ring tins always make me a bit nervous, since there’s so much surface area for cake to stick to.

Beat the butter, sugar, and eggs together till soft, light and fluffy. Meanwhile, heat the milk till just below a simmer – hot and starting to wobble but not bubbling – and carefully stir it into the butter. I added a little at first, and whisked that in, then a little more and a little more and then finally tipped the lot in – this makes it easier to mix it all together.

Stir in everything else, and spatula it into the cake tin. Bake for around an hour, or until firm and brown on top. Allow to sit for about ten minutes before running a knife carefully around the cake and its inner ring, and tipping it onto a plate. Ice with a mixture of around 250g room temperature cream cheese mixed with around half a cup of icing sugar.

Keeping it familial, and while you’re here I may as well tell you, the grey rose-patterned plate that I photographed the cake on used to belong to a family friend’s great-aunt (if I remember correctly) and it was given to me as a birthday present years ago. The blue gold-edged plate belonged to my late grandmother on my dad’s side. I love new things and new cookbooks but there’s something quietly lovely about looking at a cookbook and seeing someone’s handwriting on it, someone who only knew you when you were a baby, and thinking about them at your own age; or how a plate that would’ve had a thousand different cakes on it throughout the years is still getting to have cake on it; or just, I don’t know, knowing that these bits and pieces aren’t stuck in a cupboard somewhere but are still getting used and loved. It’s nice!

oh wow also this knife belonged to the great-grandparents too now I think on it; also this photo is an instagram which is why it’s all clean and bright like an eidelweiss
I daresay you could do further things to spruce this up; soak the prunes and sultanas in dark rum before you mix them in, skewer the cooked cake and pour over dark rum; order take-out and forget the cake completely and drink a lot of dark rum; add sultanas or dried apricots or dark chocolate – whatever, really. And then you can look fondly at your cake and say, a la Tipping the Velvet, “you’re a real bobby dazzler”.
Almost as exciting as thinking about cake, is the fact that I wrote about important television show Pretty Little Liars for The Spinoff; I am really so proud of this piece that I wrote since this show means so much to me and it took me so long to write and research but was also so fun, not since I wrote an essay about Idina Menzel for a media studies paper in university have I had such joy approaching a deadline. So even if you’re all, “this show is about teenage girls and therefore I’m quite sure without really knowing why that it is TERRIBLE and MEANINGLESS” perhaps I can change your mind or at least outrage you by comparing it to The Wire?
______________________________________________________________
title from: Old Devil Moon, a song as comfortingly old-timey yet sassy as this very cake that I’m writing about. Judy Garland could break my heart singing the happiest song and as I admire that quality greatly, that’s the version I’m directing you to.
______________________________________________________________
music lately:
Idina Menzel covering Radiohead’s Creep, live in Manila. Oh wow. I haven’t listened to the original of this song (it’s one of those ones that you utterly thrash and then it starts to lose all meaning) and I wasn’t sure how this would work but Idina is gold here, like, old-timey late early 2000s Idina all sweary and dark and twisty and her voice sounds amazing. I love her.
Laura Lee, Little Too Late. My rad pal has just released a new single, it’s gorgeous and dreamy and fun and I love it and am so proud of her! It’s a good time to be a Laura.
______________________________________________________________
next time: whatever it is I’m gonna take better care of my SD card, that’s for sure!