how much trouble can one ice cream be?

Confused yet? I decided to write this blog post somewhat in the style of a Baby-Sitters Club book, for no good reason other than it occurred to me and I ran with it.

That’s the sound of me jumping onto my bed while holding a bowl of ice cream and delicious homemade honeycomb sauce, immediately knocking over the worrying number of empty juice cans that I’m lazily keeping beside it instead of putting them in the bin. “Auughhhh!” I just manage to stop the rapidly-melting ice cream and warm sauce from spilling over onto my bed. What a day!

I guess you’re wondering by now who I am, and what I’m wearing. Well there’s me, Laura – I hope you’re taking notes, I’m going to quiz you on this later! Psych! I’m kind of the humorous one here, or so I always say. I’ve got chin-length unruly red hair and glasses, but people do still hang out with me. I’m wearing these old cerulean blue shorts that I think used to be part of some boys’ high school regulation gym uniform (I love vintage!) and a white crop top that has the word “CHALLENGE” written across the front in big black letters, because I like to wear clothing that doubles as a friendly warning for what kind of person I am. I don’t have pierced ears, but people do still hang out with me. Most importantly, I’m eating ice cream, even though it’s not even breakfast time yet. I know what you’re thinking – how do I eat all this ice cream without getting in trouble? The thing is, I’m kind of an individual when it comes to doing what I want. I’m also the only person ever that has ever been into cooking. It’s kind of my one personality trait. If anyone else likes it, I’m certainly not acknowledging it!

this ice cream is sensitive and a good listener

My best friends work during the day and I work at night, but when we get together, we always have a good time! We’re the best friends you’ll ever have. Does that sound like a threat? I’m inclined to tell you the intimate details of their respective family history, but that would be really weird, so I’ll just do a brief hagiography (that means documentation of the lives of saints, it’s a word I learned recently). There’s Kim, who has lo-oo-ong dark hair and the enormous macadamia-shaped eyes of a curious woodland deer. She’s kind of the wise, yet wickedly fun one of the group. Kate has just dyed her hair blonde, which means she is now even more popular and sophisticated – she also has a crazy household with a cat AND a dog, and a real, live, husband! Confusingly, Kate is also wise yet wickedly fun. This week because of Easter and having days off I’ve been able to see them relatively heaps and it has been very good for the soul, as the saying goes. For example, on Monday night we sat on the floor of my bedroom (it’s a great meeting space, I’m so lucky to have my own one!) and ate Pop-Tarts and drank Boulevardiers. That’s a cocktail which is like a negroni but uses bourbon instead of gin, and it’s one of my favourites. We clinked our glasses together in what we call “a toast”, and in that moment we felt like real Big City women. 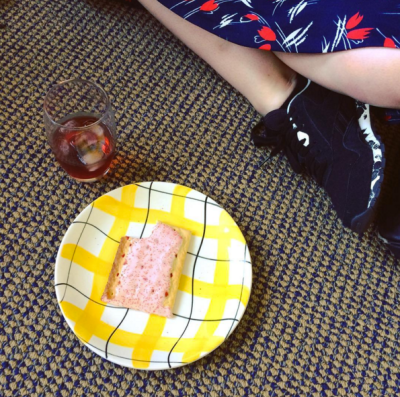 darn it! I said ruefully. I only described their hair, not their outfits.

“We’re finally getting to the plot!” I thought ruefully, tucking a lock of unruly red hair behind my tragically unpierced ears. So, I’m kind of the “food blogger” around here. I’m also kind of an ideas person. I have Big Ideas and then Occasionally Make Them Happen Around Three Weeks Later If I’m Awake Enough, I know, it’s a little exhausting trying to keep up with me! When my Ideas and food blogging combine – bam! Honeycomb Sauce. Okay, okay, I had honeycomb ice cream at a local restaurant and immediately decided that honeycomb was the new salted caramel, and wanted to make some version of it for myself to have again and again in the comfort of my own bed and/or more normal area in the house to eat. But after some time I learned a little bit about myself and a lot about the true meaning of friendship: it’s not a competition. Salted Caramel may be heavily overexposed, but that doesn’t make it any less delicious. Honeycomb is just a flavour I hadn’t thought about in forever!

I know what you’re thinking – just honey and sugar? Way too sweet. Booooring. About as fun as a pop quiz or getting Salisbury Steak for lunch, neither of which I’ve ever actually experienced.

In fact, the delicate floral sweetness of the honey and the richness of the butter come together to make something pretty magical, and very individual. It doesn’t taste overly of honey, it’s more reminiscent of (that means “reminiscent of”, it’s a word I learned recently) actual honeycomb, the kind of stuff that you find inside Crunchy Bars or other similar candies hidden around your room. This sauce isn’t perfect – I admit! – half of it remained saucy and the other half solidified as soon as it hit the cold ice cream, but this was all so fun and delicious that I decided to share it with you anyway.

A recipe by myself. I’m thinking of adding a tablespoon or so of cream to it next time to see if that keeps it more liquid but I do love it just like this.

Heat everything together in a saucepan, stirring gently as it comes to the boil. Remove from the heat once it starts bubbling and continue stirring for a bit. Allow it to cool somewhat (it’ll be like actual lava initially) before pouring it all over your ice cream. 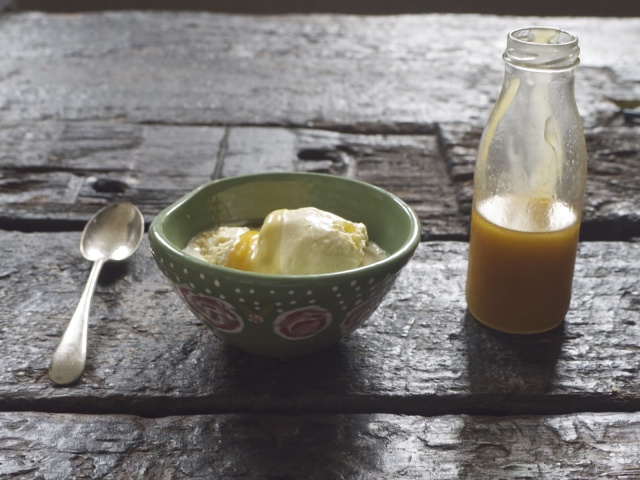 I decided to end the day with ice cream and honeycomb sauce – after all, I’m a grown up and kind of a bad girl who makes her own rules. The remaining sauce had turned rock solid in the fridge, so I had to carefully sit the bottle inside a cup of boiling water to soften it, but during this time, I learned five more lessons about friendship. Unfortunately I’m still wearing the same outfit that I was at the start of this story, but to pad things out a bit, I’ll tell you about what I wore yesterday: a vintage white minidress with pink and orange diamond patterns across it and a high neck with a collar. I wore it with my yellow socks with pizzas on them and chunky black ankle boots – pretty wild, huh? I’m a pretty wild dresser! 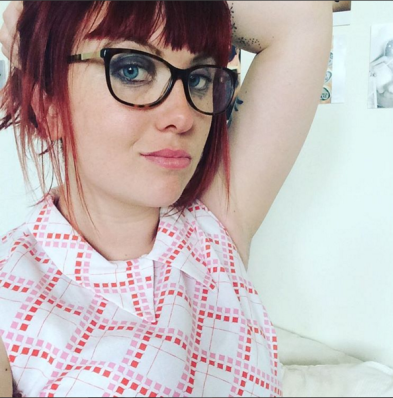 feel free to judge how well the illustration matches the description

Ice cream twice in 24 hours – that day was a summer I’ll never forget.

title from: One Beat by Sleater-Kinney. Howl-y goodness. Oh yeah, and while I’m all “what would Kristy Thomas, President of the Babysitters Club, have to say about Sleater-Kinney?” I’m also dropping the conceit for the remainder of the blog post, okay?

I’ve finally given Lin-Manuel Miranda’s musical Hamilton a proper listen and I am predictably entranced and addicted. That man is a beautiful genius and I will ramble at extreme length if given the chance to talk about him. Also look, please just watch him and other members of the cast perform My Shot for the damn president at The White House and I dare you to not get shivers.

Listening to one modern musical about historic political American times got me thinking about another one: Bloody Bloody Andrew Jackson, which in the opposite direction of the incredible success of Hamilton, ran for a mere hundred and twenty something performances on Broadway before closing. I saw a production of it in New Orleans a few years back but haven’t listened to it since; its pop punk sound is like…perfect? I don’t know what the best entry point would be, maybe Rockstar if you want something fast or Saddest Song if you want something amazing.

Kid Cudi with MGMT, Pursuit of Happiness. Whatever track this samples is intoxicating and then the rest of the song has the temerity to be excellent as well. This song is moderately ancient but sounds so fresh.

next time: the novelty is over, kids, and I have some brussels sprouts to emphasise this (they’re fried with pistachios and truffle butter though, so)