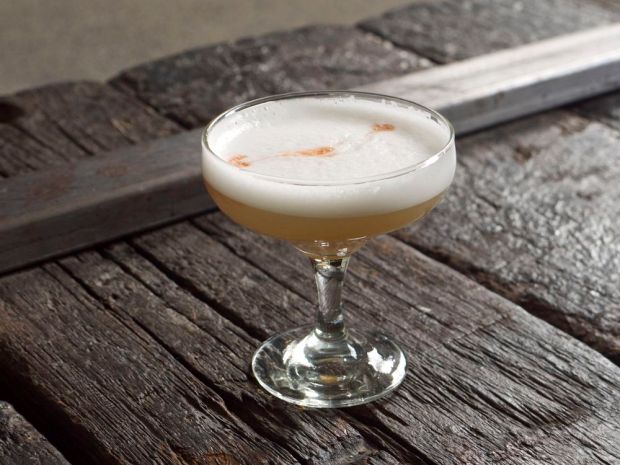 I’m sure I’ve conveyed it somehow, but if you were not aware, I am a fulltime bartender. I personally think I’m good at it. I love doing it. But I don’t tend to talk about it too much On Here apart from to like, flop around and whinge about how tired I am, which is something I’ve done whether I’ve been bartending or working in an office or conversely, working in a different office, throughout the entire lifetime of this blog. Interestingly, I sleep better now than I ever have before, possibly because I’m filling my usual insomnia hours with standing up and serving drinks to people.

But yeah! Cocktails! So fun to make! I love learning about the classics, especially the truly ancient and sometimes forgotten ones – back when someone would mix cold gin with a wineglass of this and a jigger of that and some cad would lean over the bar and be like “hot jimminy dog! This is swell! And I, Lord Flauntleroy, pronounce it a new sensation! I suggest we kiss now, Bertram.”  On that note, it is fun discovering fascinating bartenders from way back when. Like London’s Ada “Coley” Coleman, who invented the Hanky Panky – a variation on the classic Martini using gin, sweet vermouth and that friend of yours and mine, Fernet Branca. She started working as a bartender in 1899, at a time in England when you were either allowed to be devotedly married or quietly reading Pilgrim’s Progress, but nothing else, let alone be employed in the man-crusted world of night-alcohol. 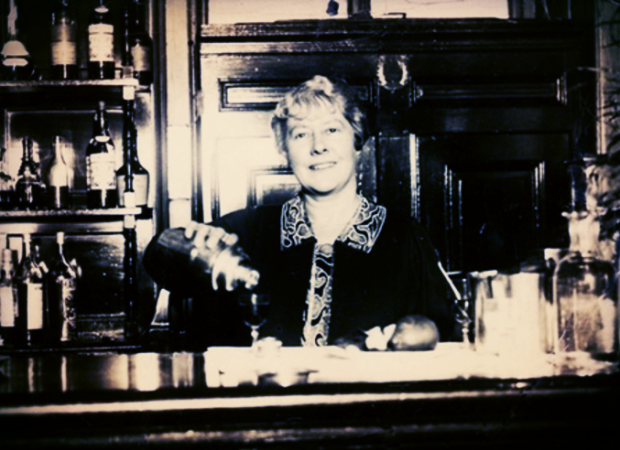 Ada “Coley” Coleman extremely doing her thing in like 1702

With that in mind I decided to do an impressively deep, powerful lunge sideways from my usual food recipes today to provide a recipe for something that I spend almost as much time thinking about: cocktails. More specifically, my variation on one of my favourite drinks, to make it vegan. So: Sours are generally a shaken-to-heck mix of a spirit, lemon juice, a little sugar and some egg white, the latter of which creates a gloriously silky texture and frothy layer on top. Raw egg white in a drink might sound un-fun but please, bear with me, as I am currently super into them and compelled to make Everything Sours right now. Including any mocktails I make for the glassie during their shift (the person who washes our glasses on busy nights: as I always say, A Hydrated Glassie Is A Hydrated All Of Us.) Importantly, you neither taste nor smell the egg white – it just wraps its proteins around the molecules of the liquid and floofs everything up splendidly as you shake the cocktail, creating a spectacularly light, foamy drink.

Whisky sours are probably the most well-known take on this format, but I personally favour gin sours, an occasional amaretto sour and the fairly underrated Pisco Sour. Once you start extrapolating out – and why wouldn’t you spend four hours on wikipedia without realising it – it becomes clear how many cocktails fall into the greater Sour family, being a mix of liquor, sugar, and lemon or lime juice – like Margaritas and Daiquiris. Sours have a gloriously punchy, sweet-zingy taste and lush texture – there’s barely a liquor under the sun that isn’t improved by a little sugar and a little citrus. However I also love sours because they’re quite easy to recreate at home. You only need one favourite bottle of spirits, and the rest is just kitchen stuff. Plus you’re getting a hit of protein and vitamin C with every sip. It’s basically an alcoholic multivitamin. 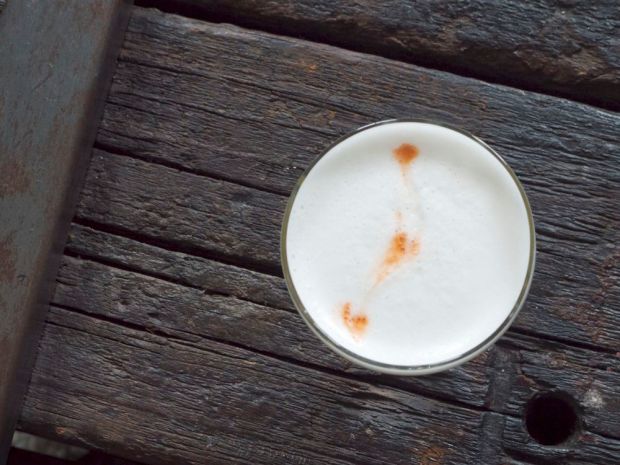 However! If you can’t eat egg white – because of preference, allergy, whatever – it seems a massive shame to be missing out on this entire avenue of cocktail deliciousness. I’m neither vegan nor allergic to egg myself, but I don’t think that’s a compelling enough reason to not explore and reimagine existing recipes to make them available to more people. Or at least: I love thinking up recipes and I like challenges, so this is my idea of fun.

If you’ve not yet heard of it, the solution is slightly leftfield. At some point in the recent past, it was discovered that the liquid from canned chickpeas, called aquafaba, behaves almost exactly like egg whites. As in, the stuff that you normally drain off into the sink, can be whisked with sugar and baked and it honestly looks and tastes like meringue. I don’t know why or how, but it’s enough for me that it’s possible. Having used aquafaba successfully before to make pavlova, I got to wondering how it would work in a sour cocktail recipe. The most perfunctory of google searches reveals that roughly five billion people have already thought of this and tested it and I was like fine, I did not discover this, but in my defence this is the first time that I’ve thought of it. 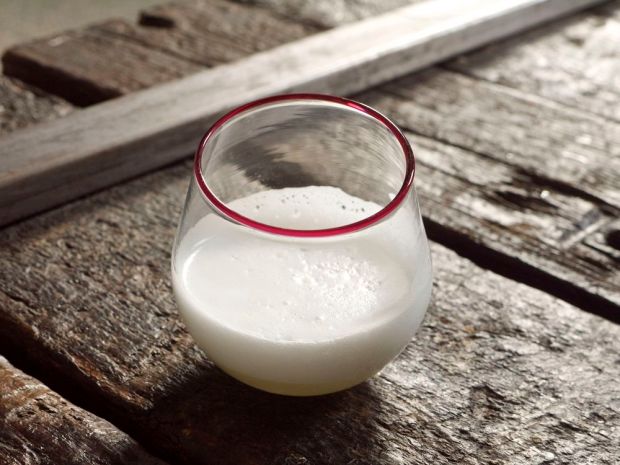 Who cares about provenance when it works so well! First I made myself a whisky sour using aquafaba, then I made another one, just to make sure it wasn’t a fluke, then I made a gin sour, and then I realised I hadn’t eaten yet and I was moderately tipsy. The important thing is though: it works! Look at how frothy these drinks are! I barely shook them and they turned into alcoholic foam immediately! I was honestly so excited. And tipsy. Now, the aquafaba liquid is not entirely tasteless –  it’s hard to explain what quality it brings, which possibly means I’m a terrible food blogger, but it just provides a slight background hint of…dust? Faint notes of literal chickpea? I counteracted this by adding slightly more sugar than I normally would. But as long as you’ve braced yourself for that, you’ve got a delicious drink on your hands that you can easily make sizeable batches of and drink joyfully while doing such activities as entertaining guests or testing cocktail recipes. 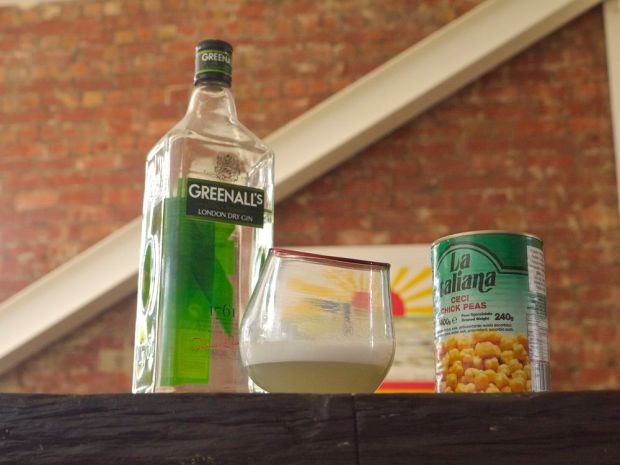 Please don’t in the slightest bit feel like you have to spend vast quantities on bartending equipment which you will possibly never use and only grow to resent and accidentally kick over all the time (curious, as you keep it on top of the fridge.) If you’ve got a clean jar with a lid you can put all your ingredients in there to shake vigorously, and pour it through a sieve into your chosen glass. Some kind of plastic container, even, would work, or just your cupped hands if you want to get super artisinal (fine, I don’t condone this, but I do stand by the alcoholic multivitamin statement.)

Another thing to keep in mind if you haven’t made your own cocktails before is, Sours usually get what’s known as a Dry Shake, which, yeah, doesn’t sound great, but it’s just where you shake up the ingredients initially without any ice before shaking them up with ice to give the egg white a chance to emulsify and aerate. If your ingredients are all cold enough you could possibly get away without shaking it with ice at all, since this gets so foamy, however a tiny bit of dilution from the water is actually desirable, just to meld all the ingredients together.

Finally, sugar syrup can be made hastily by dissolving equal parts of plain white sugar and water together. And I figure most people have some kind of shot glass lying about the house from when they went on a Con-Tiki trip ten years ago or were students or whatever, otherwise just work with the fact that one tablespoon measures 15ml and go from there.

Place all the ingredients in either the glass of a Boston shaker or inside a clean, empty jar that you have a lid for. Bang the top of the boston shaker onto the glass, or screw the lid onto the jar if you’re using it, and holding them firmly, give them about ten good shakes – you’ll see the contents instantly become frothy and aerated.

Remove the top of the shaker or the jar lid, add a handful of ice, lid up and shake again briefly. Strain into your chosen glass, decorate with bitters if you wish, drink immediately. Peychaud’s bitters is more traditional but I happened to have a bottle of Angostura Bitters and so used that instead. Leaving your whisky sour naked is also highly acceptable.

Proceed as above – shake all ingredients together without ice, then add ice, shake again for a bit, strain into your chosen glass.

To make the non-vegan versions of these, use around 20ml/just under a shot of egg white per drink. I prefer using the pasteurised stuff that you can buy in packages at the supermarket but obviously freshly separated eggs have been doing just fine for quite some time now.

Of course, nothing’s stopping you from simply having a G&T or a beer at home, but if you happen to have been given a bottle of gin or something for Christmas or feel like being slightly impressive, well now you have one more option.

As for the remaining chickpeas, they unsurprisingly have their own merits. Realising quickly that I needed some kind of sustenance, I emptied them into a bowl with a handful of baby kale leaves, some salt, some coriander seeds, some apple cider vinegar and a ton of extra virgin olive oil. Coriander seeds are lemony and peppery and the oil brought out the buttery side of the chickpeas. Kale is healthy! But also actually tastes good. 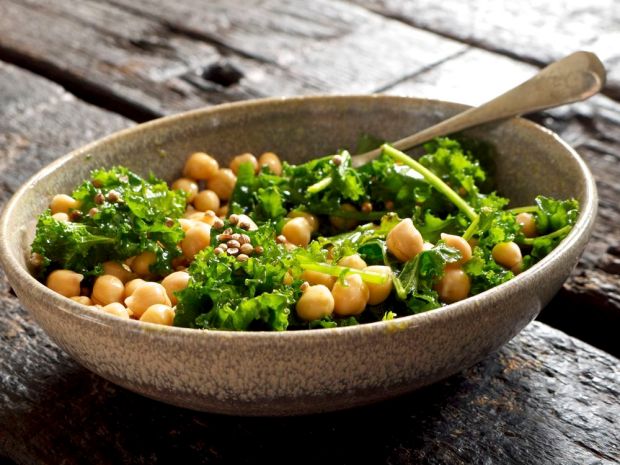 If putting one alcohol into another under your own roof appeals, I also recommend you try out my simplified take on the Lee Brothers recipe for something called Purple Jesus, and also this recipe for a Christmassy punch of Nigella’s called Poinsettia, halfway down this verrrrrrry old blog post of mine. 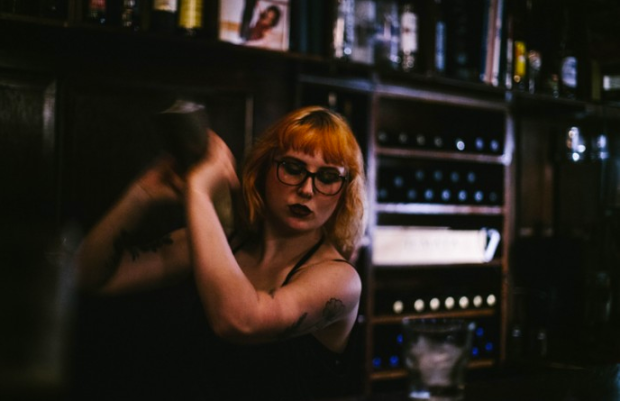 or come up and see me, also extremely doing my thing

I have always enjoyed INXS but for some reason this week I’ve become obsessed with them. Is it mostly because the tragically late Michael Hutchence was so hot and charismatic? I mean, sure. Their music is amazing though and if you feel in the slightest bit like writing it off as 80s filler then I urge you to give it your ears again. Obviously all the hits are hits but I have been listening to Disappear over and over again and it just gets to me, I don’t even know, just the dreamy lightness of the verses with the sudden rush into the heady exuberance and promise of escapism in the chorus and the massive drums and Hutchence being in effortlessly good voice. Anyway it’s almost embarrassing how long I could go on about this for but I have 100% been listening to this song and you should too.

I actually have been pretty exclusively listening to INXS recently but…I did rewatch the intensely 90s movie Go and the soundtrack is just wonderful, so much big beats and trip hop and trance and just the sort of thing that makes you want to put on a pleather knee length skirt and some brown lipstick, and put your hair into Bjork buns, ya know? The film’s remix of Fire Up The Shoesaw by Lionrock is one such excellent example here.

Uh, you should also watch Disappear from INXS’s live show at Wembley Stadium in 1991. Note I said “also”, not “alternatively”.

next time: I don’t know! I have some pastry sheets in the freezer though, that could be fun.

2 thoughts on “but it sours into a routine deceit”