I’ve been trying to write this blog post for a week and a half now and every time I’ve laid my fingertips on the keyboard I’ve almost immediately fallen asleep. Including one point on Wednesday where I determinedly took my laptop to a cafe to write, and suddenly felt almost ill with tiredness and had to go home to body slam my bed for some aggressive napping. This afternoon, finally with some time to myself, I went to write in an “I’m tying this laptop to my head until I’ve finished a blog post” kind of way and then my laptop died and refused to charge for forty minutes.

If it wasn’t for the fact that this sundried tomato scramble is so delicious, I’d be thoroughly tempted to throw both my laptop and myself into a bin, as it seems to be the most productive course of action right now. The issue is not that I’m working even later nights than I used to as a bartender, the issue is that my idiot body insists on waking up at 7.30am every day, even if I didn’t get home till 5.00am. 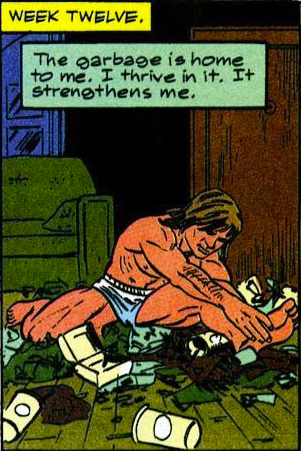 a candid photo of me blogging today

All of this has been just creating layers and layers of frustration, a lasagne, if you will, of inactivity: I have this weird guilt about sleeping in because I feel like I should be working during that time, but because I’m so underslept the hours pass this zombie by; and the more I don’t get this blog done the more irritated I am with myself but also the harder it is to make any progress because I’m just looking at the same thing over and over.

But here we are finally! I’ve acquired some Valley of the Dolls brand sleeping pills, the kind I used to rely on during periods of intense insomnia, and I’ve also got, for the first time in forever, after two years sleeping on a couple of mattresses stacked on top of each other on the floor: a real, grown up, incredibly comfortable and supportive bed. Did you know that having a nice bed is nice? I’m as astounded as you are! My butt feels so calm just sitting on it, when I lie down it’s like being held aloft by a friendly cloud. So this is definitely something I’m working on.

Back to this scramble though: it was in the middle of an up-ludicrously-early fugue state that I invented it, the recipe somehow building up before me as I went along, like the landscape in an old school racing computer game. It’s so simple that it can’t help but work though – roughly chopped sundried tomatoes become soft and fattened in a pan of butter and olive oil, before turning almost jammy with the addition of a little tomato paste and water. You then stir through eggs which become gently, softly scrambled. Put some feta and thyme on top mostly to make it look less unsightly, add some buttered bread and you have yourself a perfect little meal, be you hungover, in rudely good health, or 92% asleep.

The sundried tomatoes have such intensity of flavour – almost bacon-like with their salty-sweet-savoury vibes – that the eggs provide the ideal backdrop, all creamy and mild in comparison. The sundried tomatoes I had were a particularly sandblastingly salty kind, so if you suspect yours are similar maybe reduce the quantity somewhat, the ones from the supermarket deli or sold in jars are generally a bit more mellow though.

As I said, the feta and herbs and capers are mostly aesthetic, and I had a small handful of each in the fridge waiting patiently to be asked to dance so I figured I might as well use them up – you certainly don’t have to though. You could add parmesan, or toasted pine nuts or walnuts, or parsley, or oregano, whatever! Thyme is one of my favourites though and I will put it on top of anything (like, I would make a crown out of it for my own head if I could get it to hold its shape) and feta can do no wrong. At the other end of the scale, leave the cheese off and use olive oil only and this is easily dairy free. As per usual with my recipes, a sentiment of “whatever works” prevails.

Heat the olive oil and butter in a good sized frying pan. Add the sundried tomatoes and stir them till they’re softened and warmed through. Add the tomato paste and water, and more butter or olive oil if you like, and stir over a high heat till it has formed a thick sauce. Lower the heat significantly and add the two eggs, stirring slowly to incorporate them into the tomato sauce till they thicken and gently scramble. Gentle is the key word here – you don’t want to overheat or overmix this stuff, or the eggs will be all tough instead of creamy and soft. Remove from the heat altogether, scatter with feta, herbs and capers and serve with toast or fresh bread if ya like. 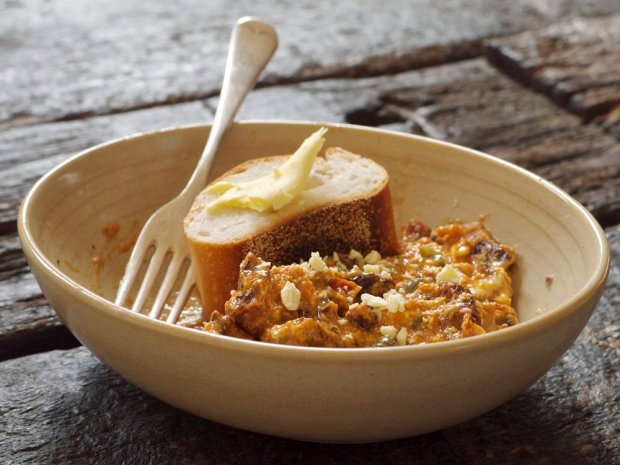 The fact that we’ve suddenly catapulted into September has not exactly aided with my chillness; but I’m doing my best to be all like, mindful and peaceful and accepting that I need sleep sometimes and that sleeping is not a morally wrong activity to partake in now and then. Plus: exciting new bed. Plus, my horoscope this month was all “maybe kinda look after yourself and try to get into a good routine or something you dingus” so you know it’s meant to be.

Oh, and if eggs are your thing, kindly also consider my recipes for miso scrambled eggs and Spanish potato omelette.

Ariana Grande and Nicki Minaj, Side to Side. It’s a great track and visually it’s like, everything, but as per Nicki completely makes it.

The Internet, Girl. God this song is so dreamy and I shall never be sick of it.

Alien Ant Farm, Movies. There’s something so heartfelt about this song that makes me love it a billion years on.

next time: good grief, I’m going to try to not lose so much sleep over it but also sleep so much on it simultaneously, also I found this recipe for homemade matcha spaghetti which sounds amazing.

One thought on “you’ve got eggs in the same basket, writing the check”