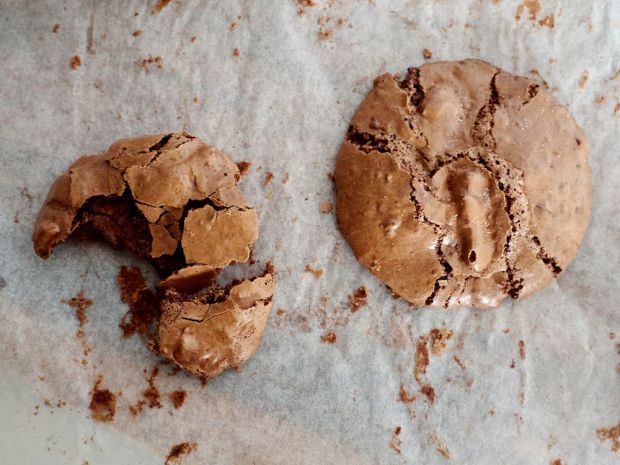 As soon as I marched out into this earth, a freshly begotten newbown, I was immediately three things: extremely Aries, extremely ready for attention, and extremely terrible at dealing with things being over. I mean, as far as the latter goes, I was already like ten days past my due date and then immediately contracted colic, possibly as some kind of bloody-minded way of implying that I really shouldn’t have had to farewell the womb where there was food on tap and no responsibilities and calming ocean noises. 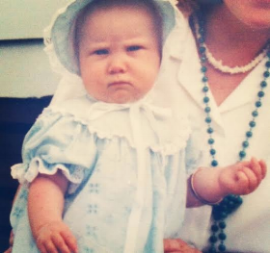 What say you, baby Laura?  “You mean I have to wait like twelve years for a coffee culture to develop in New Zealand?”

This week I’m moving from the bar I’ve been at for 18-ish months to start being a bartender at another bar owned by the same business. It’s an interesting mix of sentimentality and excitement. However on this rare occasion I’m not feeling entirely terrible about something being over, because there’s so much new stuff to learn and take on and absorb and learn. I’m sad, I’m happy, I’m so delighted about the opportunity, but ultimately my gut instinct told me I should do it and I think it was correct. (My gut instinct tells me really stupid things sometimes, like “you should work out what that crumb on the floor is by putting it in your mouth for some reason” and “you’re terrified of pelicans, lol”) As well as being in the same business group it’s also in the same building, so I’m still very much in the general family that I’ve grown to adore.

Also, did you know how much attention you get when you announce you’re going to leave a place? It’s delicious. Almost as delicious as these cookies I made to take in on my final Saturday shift at my old job which were definitely made out of the pure goodness of my noble heart and not motivated by “the glory”. But really though, I do like to bake nice things for people and wanted to have some kind of sugary vehicle for my gratitude to the team I was leaving, to help boost us through a long night, our bods filled with chocolatey energy.

In the interests of everyone’s allergy needs being met (okay fine, in the interests of “the glory”) I was after some kind of gluten and dairy-free cookie that I could make without having to gather and hunt too many random ingredients. The answer is this, which is vaguely based on an Italian cookie recipe from this book I have called The Scotto Family: Italian Comfort Food. It’s so easy – just plain egg whites stirred quickly into a mountain of icing sugar, cocoa, and cornflour, baked briefly. Somehow this bowl of not-much-at-all turns into these chewy, soft, rich-rich-rich cookies, with a kind of macaron vs brownie texture. I love them.

There’s a lot of cocoa in this, so use the darkest, strongest, high-fat-percentage stuff that you can find, if possible. That, plus the pinch of salt, is going to counteract the blatant sweetness blast of all that icing sugar, meanwhile the chunks of chocolate punctuate each bite with delicious texture.

Place the icing sugar, cocoa, and cornflour in a large bowl and stir gently to get rid of any lumps and to make it into a uniformly dusty-brown dust. Tip the egg whites in and carefully stir – it will seem like there’s not nearly enough liquid for all the dry ingredients but damn it if it doesn’t come together suddenly to form a thick batter. About halfway through this point tip in the chopped up chocolate and salt and stir it all through.

Refrigerate the mixture for fifteen-ish minutes while you heat the oven up to 180C/350F and get a baking tray lined with nonstick paper. Bake small spoonfuls, around five on the tray at a time to allow for spreading, for eleven minutes or until firm and slightly cracked on top. I just used a regular spoon from the cutlery draw, the kind you like, eat stuff with. Repeat with the rest of the mixture. I just slid the baking paper sheet off the tray onto a wooden board to let them cool and started again with a new sheet of baking paper rather than trying to prise them off individually but you do you.

Allow the cookies to cool completely and then store in an airtight container.

Despite not having tried it I know for a fact that these would be incredible sandwiched around ice cream, however on their own they are just perfect. It was noted on Saturday night that they don’t taste as though they’re lacking in gluten or dairy, which comes down to that magical texture – a crisp outer shell barely encasing a chewy, almost gooey, aggressively chocolatey centre. The fact that they are so massively easy to make just renders them even more delicious to me. 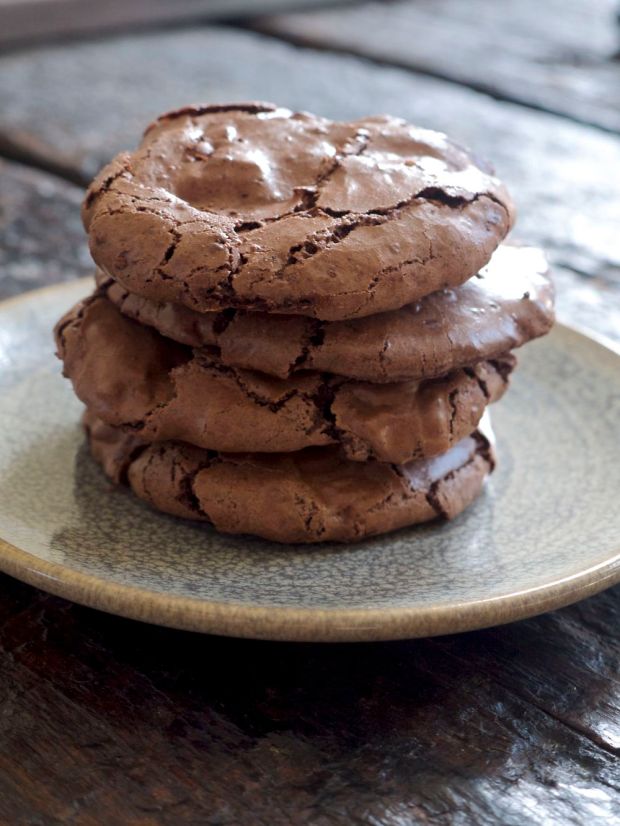 So with these cookies ends one era and another starts. If you yourself are thinking of taking something sweet into the workplace, I thoroughly recommend these: they’re fast to make, most people can eat them, and there is of course, The Glory of being that person who brought cookies to work. To be honest I love the people I work with so much that I’d make them cookies even if it didn’t get me attention though. (What an attention-seeking thing to say.)

Let’s weigh in with toddler Laura, what say you? “I can’t believe I have to wait like twenty literal years before I can look up Aries memes on the internet”

title from: The 1975’s song Chocolate, gee they are good though right? Sliiiight INXS vibes, yeah?

Santigold, Les Artistes. The sparkly poppy sound with the slightly plaintive chorus gets me right in the ventricles. This is from 2008 but sounds like it fell out of the internet just yesterday.

next time: hopefully it won’t be quite so obvious how underslept I am. Time for a nap now. Also might as well bake something to bring in for the new team I’m joining, yeah?

2 thoughts on “oh you bite your friend like chocolate”