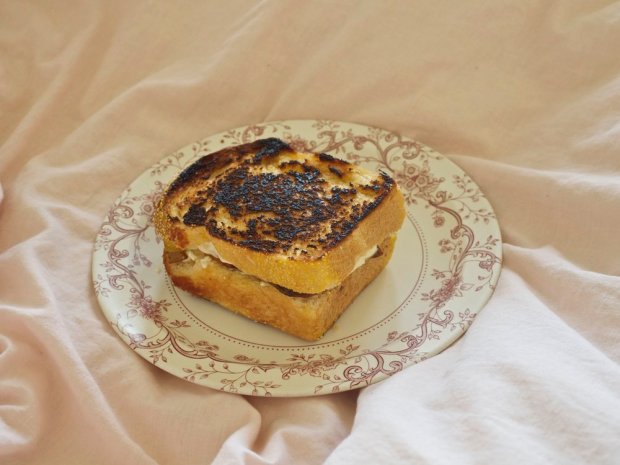 It’s easy to say that 2016 has been a garbage year. I’ve said it myself. It has been an exceptionally hard year for me in ways I didn’t even think would be possible – at least the difficulties have been keeping it fresh and interesting, I guess? – and I’m just one small struggling drop in a bucket in which we’re all lil droplets having our own difficult times magnified in concave through our personal water droplet perspectives (I imagine being a droplet is like viewing everything through a fish eye lens, the kind they used in 90s hip hop videos.)

But consider this: has any year ever been good? Can you name one good year? It’s impossible. They all sucked. And if you think they didn’t, just look at the Wikipedia entry for any given 365 days in history and rest assured that there were atrocities abounding.

All we can really hold onto is moments. Small times. A perfect afternoon. Finishing a task and not failing. A really nice enveloping hug. Realising someone was thinking about you at the exact moment you were thinking about them. A nap where you had a beautiful dream. Catching yourself in the act of existing for one weightless minute of no anxiety. Laughter. The usual stuff. 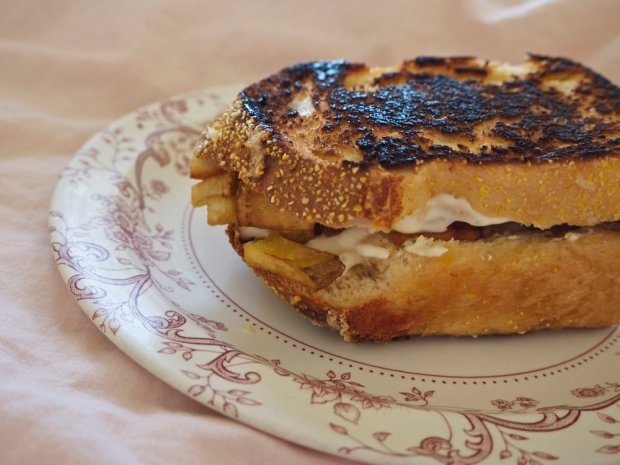 Last weekend I was up the coast in Raumati South with my two best friends. A long time ago we organised a little getaway in the face of 2016 being so intense – little did we know how much more 2016 would happen between us booking the holiday and us actually getting there. And how much more was to come. On the first night, we were woken just after midnight – full of nachos and red wine and mere minutes into a deliciously early night’s sleep – by a fairly enormous earthquake. The kind that really does damage. And then aftershock upon aftershock upon aftershock. Now I’ve been truly terrified of earthquakes ever since doing a school project on disasters in 1997; yet somehow I was calm and almost managerial throughout the quake itself, comforting my friends and holding them tight and repeating logical things.

As soon as the shaking stopped I threw up three times and then slept a total of about six hours over the next three days that we remained out there. My cool leadership was nice while it lasted I guess. On the other hand being around your best friends in a little wooden bach up a hill is about as safe as you can be against any kind of trouble.

So now all of a sudden we’re in this post-quake time; what were we even doing before it? I’m immensely, immensely lucky that no damage was done at my apartment or workplace, but I’m constantly on edge and anxious and can’t stop myself. LUCKILY, she says self-deprecatingly, I’m always anxious and so this is at least nothing out of the ordinary for me. You’ve gotta keep on keeping on, I tell people, while refusing to leave my bed. 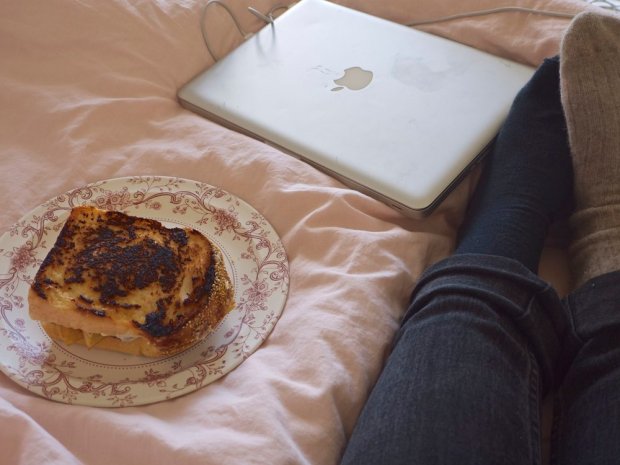 As such I have cooked myself 1 (one) thing in the last week, and it was this: a fried potato toastie. Comfort food, how obvious of me!  But who cares, this is something you can make for yourself which requires very little in the way of gathering ingredients, and there is something about carb on carb that brings some kind of calm to the soul; who am I to fight it.

It’s very simple. Small cubes of potato fried in olive oil till crisp – which doesn’t take that long. Sandwich them in two thick slices of bread spread with something, sit that in the pan till its golden, eat it in bed. There’s something about the salty crunch of potato against fluffy, soft white bread, sinking into the cool sour cream, that makes one feel like the world is a less scary place.

recipe by myself. It looks long but I just kind of over-explain everything, it’s really easy I promise.

Heat about three tablespoons of olive oil in a large, heavy pan. Dice the potato quite small, into rough cubes and chunks of one or two centimetres. Once the oil is hot, tip the potato into the pan, with the aim being to get all the potato in one single layer. Add a little more oil if you like. Leave the potato to fry for five to ten minutes and then once they’re golden on one side, turn each piece over to allow it to fry on the other side. This is possibly slightly tedious but it’s also calmingly methodical, and a regular spoon is the easiest way to turn over all the little pieces. Once the potato is all cooked through and crisply golden on both sides, remove them to a plate.

After eating this I immediately fell into a thick, heavy nap, which I believe speaks to the toastie’s inherent power. I didn’t have any cheese to hand and have no doubt that it would improve everything, but the sandwich was perfect on its own – oily, salty, crispy, soft, all the good things.

So now what? I mean, you have to keep on keeping on, (she says, refusing to leave her bed) and making yourself a self-indulgent toastie is definitely one way of doing that. Just do what you can. And if you’re not up to feeding yourself, you know what you should do? Go out. Support your local hospitality scene, because they need you. What are you going to do with your money anyway, put it in a museum and look at it? No! Be with your friends, have a drink, come together, help businesses to keep going. In all honesty the best thing about Wellington is the places to eat and drink, and without them what have we got? In the last couple of days I’ve taken myself out to breakfast at Loretta, coffee at Customs, drinks at Library, shotgunned beers in the backyard with my friends in the sun like nothing was the matter at all; and I barely have any money or free time. I’m also, despite my nerves, doing my best to show everyone at my home-away-from-home Motel the best time possible, because anyone who comes through that door has made the effort to leave the house and connect with people and support us. (I mean I always try to show people a good time but damn it, this earthquake has made me sentimental as heck and suddenly the smallest things feel momentous.) I’m not saying I’m a hero by like, buying a coffee. I’d go with “icon,” personally.

Anyway – just keep looking for the nice moments, and creating as many as you can muster, they are there somewhere.

Also: If carb, on carb, on carb-on-carb-on-carb is your idea of comforting, may I also direct you to my recipes for Halloumi and Hash Brown Burgers; Fried Potato Burghal Wheat with Walnuts and Rocket; and Marmite and Chip Sandwiches.

title from: Blink 182’s sad as song All of This, featuring that sadness maven Robert Smith.

Amy Shark, Adore. I can’t stop listening to this song!

Dead Flowers, Might As Well Get Used To It. Might as well, huh. This song from this NZ band from 1998 is gloomily beautiful and sounds like a cross between that Radiohead song from the Romeo and Juliet soundtrack and that Gorillaz song Tomorrow Comes Today but is also very much its own, sadly charming thing.

Sharon Jones, Got A Thing On My Mind. In yet another thing that makes this year suck, she died the other day, at just 60. I was so lucky to see her live with the Dap Kings when they came to Wellington a few years ago, but it’s ugh, so horrible, she was so young and her music is the most alive thing ever.

next time: hopefully my nerves will subside a bit and allow me to move on from AGGRESSIVELY PRIMAL type cooking but if I’m stuck eating nothing but fried carbs for a while I’m chill with it.

4 thoughts on “to fill a whole, to shake the sky in two”