For the last week or so I’ve been sick with a really rough cold that I’m juuuust coming out the other side of, mostly due to a drinking game that I call “take lemon honey ginger every time you cough”, a game with a sub-rule of “strawpedo Robitussin at any and all opportunities” which is curiously followed by “the floor is now lava.” I’m well aware that my last blog post was essentially a bowl of nuts and the blog post prior to that was pasta and now, what is this blog post about but a bowl of PASTA AND NUTS but as I said – I was sick! An unfailingly watertight excuse! I’m sorry I bailed on you, I was sick! I’m sorry I stole your car in the middle of the conversation we were having and then drove it into your other car, I was sick!

My tastebuds have been woefully muffled from having a blocked nose, but I woke up this morning not only feeling a lot better, but also thinking, “what if pesto, but with three different kinds of nut instead of just one” and decided, as I do with most of my thoughts regardless of content or consequence, to act upon it immediately. I feel that pesto was to 2003 what halloumi was to like, 2013, I remember being absolutely obsessed with it and having it feel hugely unattainable, and so I’d try and incorporate it into as many of my cooking class modules in high school as I could get away with (I really didn’t do well in cooking in high school but I think that’s because being a freewheeling spoon-licking pre-ADHD diagnosed idiot didn’t mesh well with teachers trying to get to grips with the assessment regime and a minimal budget that didn’t allow for just like, snorting mounds of pesto.)

But wait, who am I to think I can improve upon pesto? Well I’m me, but this isn’t a one-up so much as a side-step; I’ve subtracted the cheese and instead added knotty, sinuous walnuts and buttery pistachios to the original pine nuts. Which means yes, this fairly plain dish of pasta will cost you roughly $90 dollars, on top of which, even though the quantities of the recipe look huge it really doesn’t make that much pesto because it all reduces down to nothing in the blender, but in spite of all of these red flags may I offer you this one counterpoint! Here it is: it’s really, really delicious.

Walnuts give the mixture body and a bitter smokiness, pistachios give creamy richness and added green, the pine nuts are all…you know, they’re pine-nutty? And when thrown through glassy olive oil and basil leaves at great speed it produces the most incredibly wonderful-tasting freshly-mown-grass-looking paste to stir through pasta or to be consumed however feels right.

Bring a large pan of water to the boil, add plenty of salt, then cook the pasta for about ten minutes or until it’s like, cooked, then drain the pasta and set aside. I always use the water from a freshly boiled kettle in the pan because it goes way faster than just boiling it on the stovetop.

In a large frying pan, gently toast the nuts over a high heat, stirring often, until the pine nuts are lightly browned (they’re the easiest to see the color on.) Tip the nuts into a food processor or high speed blender along with the garlic clove, lemon juice, a large pinch of salt, the basil leaves and the oil, and process until it’s a thick, dark green paste. Stir a couple of spoonfuls through the drained pasta and put the rest in an airtight container in the fridge. 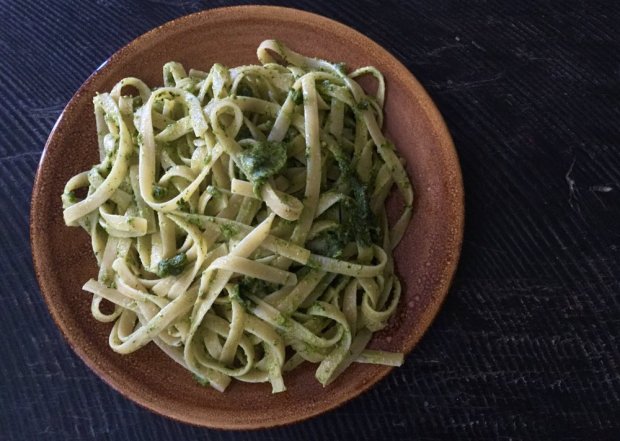 Honestly, this stuff is just spectacularly good and makes the simplest pile of pasta feel like a monumental treat. You can do millions of things with pesto though – stir it through roasted vegetables, spread it on toast, thin it with olive oil and drizzle it over fried halloumi for a real galaxy-brain type combination, add a spoonful as a garnish to brighten up almost any soup, whatever your tastebuds decide, follow them in the direction they’re heading.

And if you’re on a permanent pasta buzz as I seem to be, may I direct your attention gently but firmly from me, back to me, by way of these old blog posts if you want some further recipes, eg something I called Sexy Pasta; Nigella’s Pasta with Marmite; or turmeric pappardelle with brioche crumbs.

title via:  De La Soul’s The Magic Number, I love how shambling and lo fi and almost big beat the production is on this old school (I mean old school, not like “here’s one from back in the day in 2009”) track.

Gaslight Anthem, Here’s Looking At You, Kid. This band was recommended to me and I now in turn recommend them to you because I love them, and you will too if you like heart-on-your-sleeve, Bruce-Springsteen-influence-on-top-of-your-heart-on-your-sleeve vibes.

Bizet’s Pearl Fishers Duet, sung by Jussi Bjorling and Robert Merrill. It was probably the Robitussin in my system but as the sun streamed through my window this morning I swear this song was literally playing and I don’t know, it’s just kind of magical and soaring and you too should listen to it really loud while lying down in a dark room where the light is starting to creep in.

next time: my friend Jen gave me a bunch of limes from her tree so I’m gonna do something with them. I don’t know what yet though but having that many limes, in this economy, is very exciting!

One thought on “three, that’s the magic number”