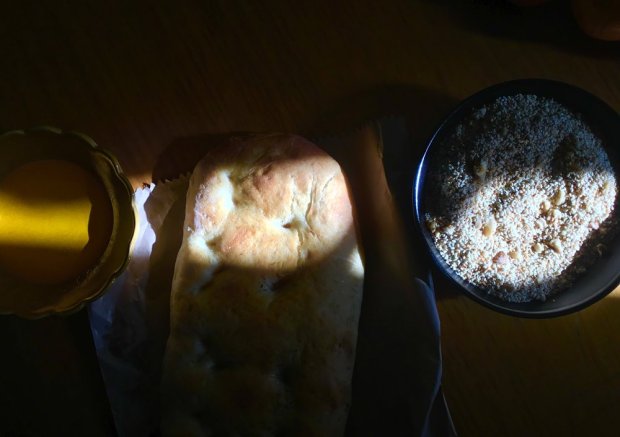 Sometimes I’ll make a recipe and it seems so bordering-on-nothing-y that I’ll hesitate to put it on here, but the truth of the matter is that this week I made myself a gigantic quantity of dukkah and that’s what I’ve been eating, and what I’ve been eating goes on here, so here it is. I remember first having dukkah with my aunty who lived in Hamilton, which seemed extremely cosmopolitan in comparison to the small small small town I was from. She was like, you have your bread, your oil, and the dukkah – a mixture of seeds and nuts and spices – and that’s the meal. As someone for whom a meal was either a microwaved pie or meat, potatoes, and microwaved broccoli, this was a damn exciting revelation. There’s something so wonderfully leisurely about just slowly eating bread and some kind of unguent, and I’m super here for it, especially since my weird working hours (as a bartender) mean my eating habits can be reflectively weird as well, like I might not desire food till 4pm or I might be wanting a six course meal at 4am (and unfortunately, they’re mighty hard to come by at that hour) so food that drifts with me like this is ideal. And to circle back to my original point, honestly who am I to proclaim this old school Middle Eastern dish as nothing-y anyway? It’s substantial and substantially delicious.

I don’t do anything particularly revolutionary with my recipe, since in all honesty it doesn’t need any further flourish. The spices are earthy cumin, lemony-gingery coriander seed, and the warmth of cinnamon, and then it’s just loads of sesame seeds and some walnuts, which have a soft, buttery crunch under the tooth. Pistachios would be wonderful but they stay prohibitively expensive, and besides I had some walnuts leftover from the recipe I made last week. Feel free to play with proportions as you wish though – this makes a sesame-seed heavy mix but add more or less, muck around with spices, follow your dreams, live your truth, look inside your heart and find the answer there, etc.

Heat up a large pan and gently toast the cumin and coriander seeds, stirring often, till they’re fragrant but not browned. Tip them into a pestle and mortar and smash em up, then tip this into a large mixing bowl. Tip the sesame seeds into the same pan and stir them until the seeds are lightly browned. Transfer them to the mixing bowl with the spices, and finally, tip the walnuts into the pan and stir around till they’re lightly toasted. You can either bash up the walnuts in the pestle and mortar or roughly chop them, but either way stir them into the sesame seed mixture. Add the cinnamon and plenty of salt and pepper and stir to combine, and that’s it. Transfer to an airtight container or like, eat the lot. 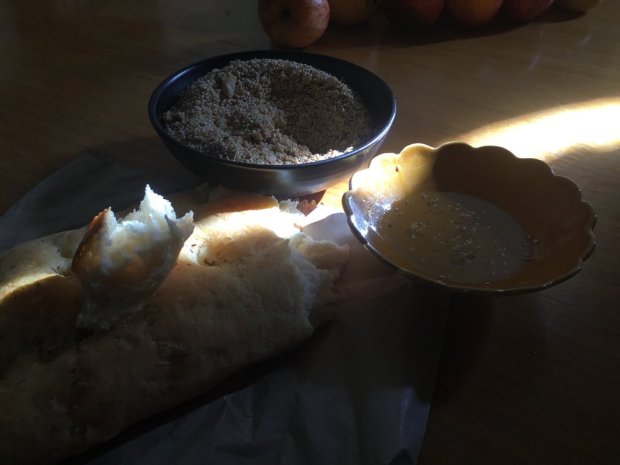 I completely acknowledge, by the way, that my photos this week might be kind of rubbish – I was extremely taken with the stark sunbeam across the table as I was eating but there is every chance that what I saw and the photos I took do not exactly match up. Nevertheless, it’s what you’re getting. Anyway frankly who cares, when the food is so delicious it can speak for itself. I’m huge on texture and absolutely love anything crunchy and so the juxtaposition of soft, soft bread dipped in oil and then in turn into the bitey, nutty, warmly spiced coating of dukkah is incredibly pleasing. I highly recommend it.

And, if you’re in the mood for other bread-and-stuff type recipes, may I recommend further reading in the form of  my recipe for hummus, or Tarator (a walnut dip), or Cambodian Wedding Day Dip (they’re also all vegan, if that’s of interest.)

title from: Gold Lion by Yeah Yeah Yeahs. I love the opening drum beat so much, it reminds me of that iconic Be My Baby opening even though it’s not actually anything like it.

Okay so I watched the film Popstar: Never Stop Never Stopping the other day and it was like, fine, and pretty amusing, and I have a lot of time for Andy Samberg because I have an inexplicable crush on him, but I found one song from it in particular got completely stuck in my head, and then because the internet is wonderful, someone has uploaded to YouTube precisely what I actually wanted to listen to: not the song itself but the background, which samples a song from the 60s by the Marcel’s called Heartache: basically it’s like incredibly obnoxious and I want ten hours of it on loop. So here it is: So Humble, the instrumental version, which I physically cannot stop playing.

Upon recommendation I’ve been listening to a band called Idles and! They’re so good! I love shouty punky stuff and if you do too I recommend starting with their song Mother.

Fenugreek by MF Doom always makes me feel so, SO happy, I extremely recommend it.

next time: I want to get into feijoas while they’re still in season!

3 thoughts on “tell me what you saw, there was a crowd of seeds”