So about three weeks ago I started writing a blog post on here and then suddenly, like those weird half-dreams you have before you’re properly asleep, where you slip over and fall, slamming hard into your own bed, waking up with a gasp, I just like…could not write another word. And wanted to throw my iPad against the wall to create as much distance between myself and this blog. Once the dramatics subsided I was like okay, let’s actually analyse this rather than unsubsiding into more dramatics, tempting though it is. I think I’ve allowed myself to just drift aimlessly on here without any great sense of purpose and it’s kind of dragging me down a bit. And then I tried to look at the bigger picture, which is not something I do very often, and I was like to be fair, for the entirety of last year I was battling some massive-assed depression, so every single blog post that I wrote felt like a small victory, a mountain climbed, a display of life continuing. Then at the start of this year I spent well over a month recovering from a Literal Head Injury so actually it’s no wonder I ended up feeling super listless about my writing. Right now though, I’m actually doing pretty okay on most fronts, so I can finally take some time to focus on what I want out of this blog, out of life, out of everything. I’m not actually entirely sure what I want yet, it seems just out of reach. BUT I do know that I don’t actually want to give up on this blog at all.

Out of some kind of bloody-minded curiosity I made a list of every project I’ve embarked on and abandoned and it was almost hilarious: for a minute I had a food podcast, for a while I interviewed musicians about food, I had a mercifully short-lived (like, if only it were so short-lived that it didn’t even occur at all) foray into vlogging on YouTube, for a while I was making instructional cooking videos, for a bit there I was making cookie dough pretzel sandwiches and selling them with flagrant disinterest in the laws around making food for profit. But this blog, somehow, has remained a part of my life for ten entire years! Eleven in October! And a lack of focus is not a good enough reason to give up on it, it is in fact merely a prompt to get more focussed. It’s okay to have peaks (eg writing a cookbook) and low points (eg being ghosted by my publishers) and it’s okay to start projects and not finish them, but it’s also okay to challenge myself and to try to fight against complacency and to maybe, just maybe, put some effort into planning things rather than just starting them without any thought of sustainability.

I also realised that part of what was making me all disillusioned was how broke I am, it’s kind of hard to keep up a regular conveyer belt of blog-worthy food and it feels like any goals I do try making end up getting ground down into nothing through lack of funds. But there are small things I can do! My angelic friend Sarah gave me a laptop cord – mine had broken and I couldn’t afford to replace it so I was taking photos on my phone rather than with my proper camera because the editing software was on the laptop and the increased lack of quality was increasing my disillusionment – so this is a start. I’ve decided to put myself out there as available for freelancing work again and am working on putting together a small online portfolio. I was reading through old pieces I’d done – travel writing, pop culture stuff, whatever – and I was like you know what, I’m really good at this! And I could do it again! None of this is stopping me being broke in the short term but it is helping at least to keep my chin up. I’m also, don’t you worry, determined to not let my Frasier food blog fall by the wayside.

And I made a cake. 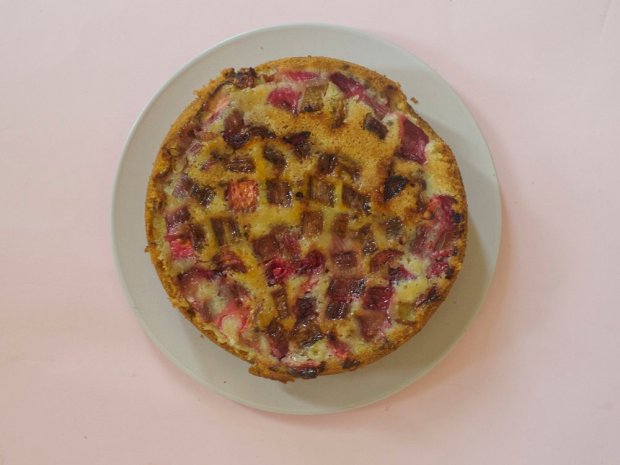 Yes, hand-wringingly long-story-short, I’m still here and I made a cake. I got some rhubarb from the Sunday vegetable markets (dragging myself to the markets is itself a gigantic achievement) (also I went with tip money from work the night before and this is why you should tip your bartenders, people!) and while there are any thousand million numbers of ways that you could enjoy rhubarb, I was in the mood for something pinkly sugary. An upside-down cake is a rakishly attractive way to use fruit in your baking, as it provides both flavour and decoration, but there’s certainly nothing stopping you from just folding the chopped rhubarb through the cake batter. This makes a handsomely tall and proud cake from which to carve thick, tender slices, and it’s wonderfully easy to make as well – just a one-bowl affair and a bit of stirring. 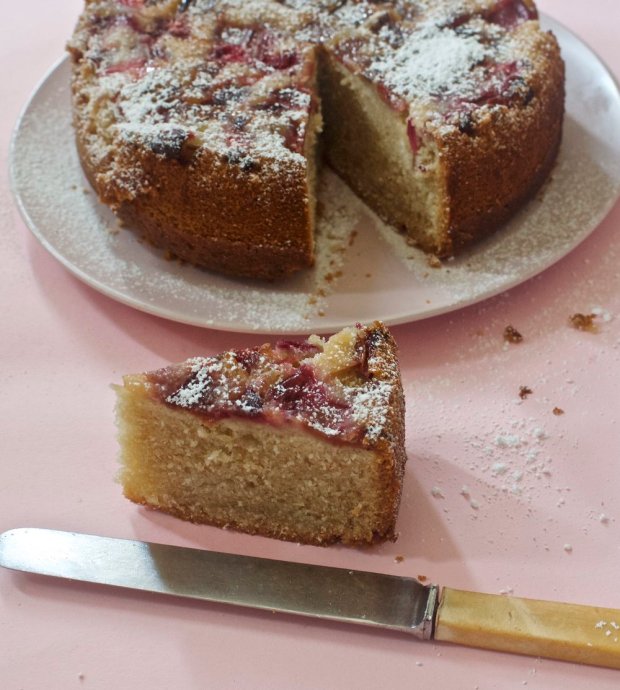 I scattered some pink peppercorns across the rhubarb before draping over the cake batter; I liked the pink-on-pink dovetailing and their musky-sweet warmth is lovely with rhubarb’s jammy tartness. If you don’t have them though just leave them out – regular pepper is too harsh to substitute in here.

Firstly, set your oven to 180C/350F and line the base of a 21cm springform cake tin with baking paper. Trim and discard the leaves from the rhubarb, and chop the pink stalks into slices of roughly 2cm/one inch. Arrange the slices evenly inside the base of the cake tin, sprinkle with the quarter cup of sugar and the peppercorns, and set aside.

Sift the flour, baking powder, baking soda and salt together in a large bowl, then stir in the sugar, followed by all the wet ingredients. Mix to create a thick batter, and spatula this carefully over the rhubarb in the caketin.

Bake for fifty minutes (it may need longer, it depends on your oven) and let it sit for a few minutes before running a knife around the cake inside the tin and upturning it carefully onto a plate. Dust with icing sugar if you like, and be on your way.

Rhubarb’s natural sourness means it can carry a lot of sugar and it works beautifully with the hint of lemon and vanilla in the cake. If rhubarb isn’t in season or just not what you’re into, you could use this as a template for damn near any other baking-friendly fruit – upside down apple cakes, berry cakes, whatever, would all be worthy uses of your time. I was really happy with this just as it was though – don’t get me wrong, I’ve been eating, but it’s been nothing particularly inspiring or joyful and nothing felt worthy of writing about here, and so the act of making a cake felt good.

And I guess after ten years it would almost be weird if I didn’t have some moments of uncertainty, yeah? Who knows if blogs will even still exist by the time I get my act together, but for now my goal is: to have a goal!

(PS: I went back and forth about whether to say something about Anthony Bourdain, who died last week. Like, does anyone need me to say anything? Nah. Have five thousand tons of things already been said? Yeah. But it’s terribly, terribly sad, isn’t it. I cannot recommend hard enough that you look up some of his shows where he traveled around the world and just listened to people about their food and their lives.)

title from: a sad and strange story – Connie Converse was one of the earliest examples of the singer-songwriter genre, but her recordings made in the 1950s went by and large unnoticed until 2004, nearly thirty years after she completely disappeared never to be seen again. I don’t mean from the music business, she like, fully disappeared. Her small but beautiful collection of music has a kind of thoughtful melancholy to it, very spare and gently folky. I took the title from her song Trouble, a short little song with the repeated stanza – “but if you go away, as trouble ought to do, where will I find another soul to tell my trouble to?

Chelsea Jade, Laugh It Off. I love her! I love this new song of hers!

Faith No More, We Care A Lot, the original 1985 recording with Chuck Mosley. It’s not that the more well-known version is all that polished but I love how sludgy and grubby this one is, like it’s about to slide off the beat any second now, and I looove Mosley’s bratty, congested-sounding voice.

Rock Star from the musical Bloody Bloody Andrew Jackson, a pop-punk musical about a bad and useless American President, which as a premise may or may not appeal but this song is SO GOOD to listen to while striding purposefully down the street. If you’re more into striding with aimless melancholy I recommend instead listening to Saddest Song from the same musical.

2 thoughts on “ever since we met, the world’s been upside-down”