Since we last talked a lot has happened, so let’s recap! I loved many things about my job as a bartender but I was also like, I could accidentally carry on working round the clock for another year and a half and not actually confront myself with any real life decisions, and so my final shift was last Sunday; as for the moving house bit, well my lease was coming up for renewal and the rent was hiked upwards to a height so dizzying even in this current economic climate that it would give you a nosebleed just to countenance it, and I was like honestly I can’t condone this behaviour from the landlords so I bowed out and am now temporarily but delightedly mucking in at the house of my lovely friends Kate and Jason.

I spent roughly five days in the lead up to moving house entirely consumed by fretting about packing, and doing packing (in that order), aided considerably by my stalwart pal Charlotte who managed to briskly pare my enormous wardrobe down to the point where the pile of clothes I was getting rid of was bigger than that which I kept (and to her credit sat gamely through such dialogue from me as “it’s, you know, just an everyday classic practical see through top, a real wardrobe staple” and “this coat-hanger has been in my family for generations.”) This is the first time I’ve moved house since acquiring an ADHD diagnosis, by which I really mean, this is the first time I’ve moved house with the aid of Ritalin and months of hard work on being slightly less of a liability, and I must say while it was a novelty being so relatively organised in advance I was also hit like a fleet of bicycles by anxiety about how disorganised I’d been in every single moving-of-house hitherto. But – I managed to send the movers that I’d booked to the wrong address in case you were concerned that I’d made too much progress.

So now I live in Newtown! I made dinner for Kate and Jason and also our friend Jen on Wednesday night – cooking dinner is something I can easily do in order to be a good houseguest, but also something I haven’t done with any great sense of routine in absolute years; on top of which I’ve been feeling a bit detached and weird and nonplussed and whiplashed since leaving my job and moving house and getting rid of 2/3 of my precious, practical, see-through clothes which is of course totally normal for such circumstances but I’m trying to get a grip on myself and on my sleep cycle and on my use of time and on, well, everything really, and just when I was feeling like none of this was going to happen, I was flicking through one of Kate and Jason’s Ottolenghi cookbooks and saw this recipe and felt filled with inspiration to make it and I was like, well, this is a start.

Ottolenghi is so talented at making any old pile of vegetables feel exciting and exuberant, this is because his recipes are really good as opposed to any deeper level of witchcraft than that; but I mean he’s just such a great read if you’re feeling a bit culinarily blank and it’s also the middle of summer and you want the kind of meal that holds at least two components that are in danger of getting stuck in between your two front teeth, by which I mean, greens. 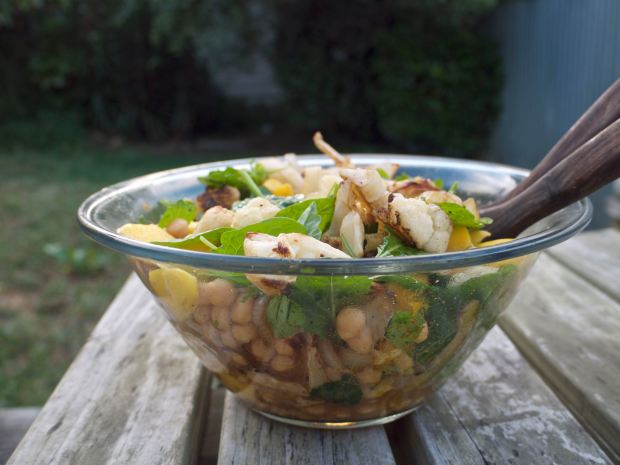 The salad recipe I present to you is a lazy version of the original one in his book, Plenty More. The key components all have their place: the dense granular mildness of the chickpeas, the oily and caramelised fried cauliflower, the sweet summer brightness of the mango, and it’s all just very delicious and simple and straightforward. The curry powder has such a nostalgic quality to it, and its sweet earthiness against both the vibrant and the calmer ingredients is so good, don’t overlook it. Mangoes just sing of summertime, don’t they? I urge you to seek out a pertly bulging specimen, ripe but not fermentingly soft, you want it to be al dente for want of a better word. (Also? I love mangoes but their flavour is so elusive, like trying to move towards a rainbow, that I feel as though I need to eat twelve mangoes in order to experience the power of one actual mango’s flavour? But also matching them with all these savoury elements really makes them come to life?)

adapted slightly from a recipe in Plenty More

Drain the chickpeas and place them in a large serving bowl with the cumin, curry powder, mustard seeds, and sugar, and stir well.

Heat up a tablespoon of oil in a saucepan and fry the onion till softened and golden, then stir into the chickpeas.

Meanwhile, bring a pot of water to the boil and cook the cauliflower in it for one minute, then drain thoroughly.

Heat more oil in the same saucepan that the onion was fried in – a couple of tablespoons will do – and once it’s really hot, fry the cauliflower in it in small batches. Don’t overcrowd the pan, and let the cauliflower sit for a few minutes before turning it over, to allow it to get golden and brown. Transfer the browned cauliflower to the bowl of chickpeas and continue till all the cauliflower is done.

Chop the mango into chunks and stir into the chickpeas along with the lime juice, the spinach, the coriander, a good drizzle of olive oil and plenty of salt and pepper to taste. Serve.

I liked this even better the next day when the spices and lime juice had soaked into everything, it didn’t look as good but it tasted more intense.

In case you didn’t see my last blog post, my reason for making all these drastic life changes at the expense of all involved is that I am going to write, just like, so much stuff, with this in mind and also my unemployedness – not that it’s anyone else’s responsibility but my own, but it could be yours if you wanted! – I direct you confidently towards my Patreon where you could get in at the ground floor on supporting what I do and receive exclusive content in return. And that really is my plan, to recover from the whiplash of this all-change and to write, well, that and to be as good a house guest as I can possibly be. (I just realised as I type that there’s a double meaning to “write, well” – wow I’m doing great already.)

Walk Away, Sisters of Mercy, they sound, as I described to the long-suffering Charlotte, as though someone is trying to convey jauntiness while trapped underwater (by which I mean, obviously, I love it)

Morning Terrors and Nights of Dread, Shilpa Ray, it starts off surfy (good) and ends up surfy and howl-y (very good!)

Blue by Rico Nasty, she is incredible!

Next time: I tried making some macarons with the leftover aquafaba from the canned chickpeas in this salad and they were delicious but super fragile, but I presumably have the energy now to nail the recipe properly.