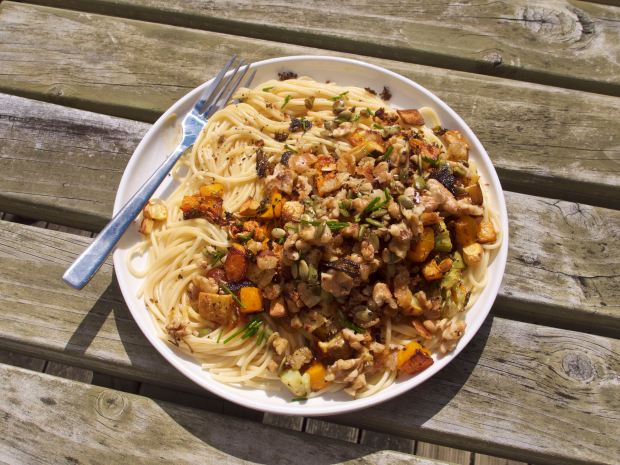 Bad things are always happening and we absorb them into our perception of reality without even realising it. Yesterday you were X, today you are X+N(N=new bad thing) and next week you might be X+N+N+N or you might get away with not being this at all, for now. On Friday March 15 a white supremacist terrorist attack happened in Christchurch, where 50 Muslim people who were praying at mosques were murdered by a man with a gun, and now this is the new reality and I can’t remember what it was like to not know this.

This blog post is not going to be about this or about how it’s affected me – that’s not what anyone needs! – but I need to acknowledge that it happened and that it’s added an extra layer on top of us all, like a coating of poison-laced buttercream on an old, stale cake. I will say: everything feels kind of urgent and pointless at the same time, however I am focussing on direct, concrete actions that I can take, because I want to be contributing positively in whatever ways possible. I believe strongly that this is the most important thing that those of us who aren’t part of the Muslim community can do: actual, concrete things. If you don’t have money, it could be time, energy and mental effort. Volunteering, supporting, writing letters to politicians to endorse new gun control measures and to the media to condemn those they employ who contribute to white supremacist ideology. Have uncomfortable conversations, challenge your racist uncle, don’t pretend you can’t see weird posts from your long-ignored acquaintances or workmates on Facebook. Read Muslim writers’ articles and stories. Acknowledge your rising anxiety and be kind to yourself, but examine where you stand in proximity to this tragedy. There’s a good article on The Spinoff that links to where you can contribute money for the victims and their families and places you can volunteer. I want New Zealand as a whole to scrutinise itself, to do better and do more for the Muslim community and in turn for all those who need it. That’s what I have to say. 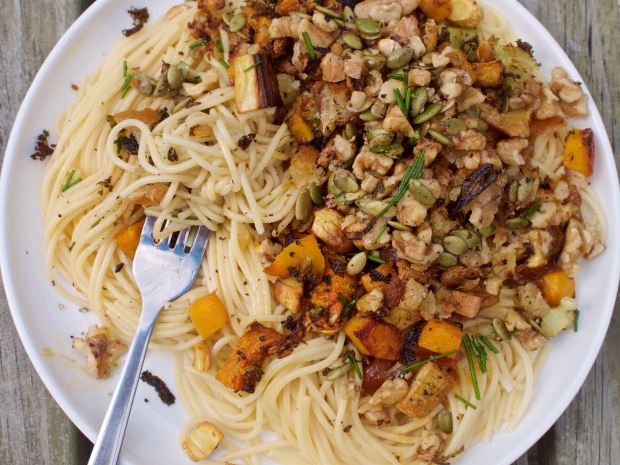 This week’s recipe is full of elements that I find comforting but I would like to establish real quick that I’m not equating it with what’s happened in a greater context, this is just what I happened to cook for Kate and Jason for dinner the other night. It’s not like, self-care pasta or anything! Let’s not do that.

I’m kind of obsessed with roasted butternut squash (indeed, see my recent recipe for sticky roast balsamic sumac butternut and cashews), I love its mellow sweetness and how when you roast it the edges are all crisp and crunchy and the insides are all soft and oily and I really love how it’s about a thousand times easier to slice up than regular pumpkin and cooks quicker too. Parsnips have a similar vibe, only even more mellow and creamy, and together they taste like a welcome payoff for the fast-retreating summer. (Summer actually ended like a month ago but global warming has blurred the edges of that framework and anyway I live in a city with a climate that seems to consider itself cavalierly above the concept of seasons.)

Nutmeg has this soft woodsy scent that merges beautifully with the fresh-cedar-cabinet vibes of the toasted walnuts and then when you add the warmth of black pepper and the smoky sweetness of maple syrup it’s that feeling of winding a long scarf around your neck and over your chin several times and then pulling a beanie low down over your forehead so basically only your nose is visible to the biting cold; but in food form. The garlicky crumbs are a cheap way of adding opulence and richness and the sage – as woody as nutmeg and almost eucalyptus-y – adds to the overall depth of flavour.

Set your oven to 200C/400F. Pour a couple of tablespoons of olive oil into a good-sized roasting dish and put it in the oven to heat up while you prepare the vegetables.

Carefully slice the skin from the butternut and cut the flesh into cubes of roughly 1-2cm, then do the same with the parsnips. No need to peel them though. Carefully tip both of these into the hot roasting dish, spread them out into one single layer, and roast for around twenty minutes. Chop the broccoli up into small pieces – stem and all – and add it to the roasting dish, then return it to the oven for another ten minutes. Pour over more olive oil if it looks like it needs it.

Bring a large pan of water to the boil (I always boil the kettle first and then pour that in, it’s a lot faster), add plenty of salt, and then cook the spaghetti for as long as the package instructions require (around ten to twelve minutes usually does it.) Drain, and stir through the tomato relish and mustard.

While the pasta is cooking, toast the pumpkin seeds and walnuts over a low heat in a frying pan, keeping a close eye on them to make sure they don’t scorch. Transfer them to a bowl and stir in the maple syrup, the nutmeg, and plenty of salt and black pepper. Set aside.

Tear the bread rolls into small pieces and crumbs. Heat three tablespoons of olive oil in the same pan, and tip in the breadcrumbs. Stir over a medium heat till they’re golden brown and crisp. Stir in the garlic powder, then tip the crumbs into a bowl and set aside.

Heat another tablespoon of olive oil in the same pan and fry the sage leaves till they’re very dark, then remove them from the pan and set aside on a chopping board or something. This will only take a few seconds per leaf, I recommend using a pair of tongs to get the leaves out.

Pile the spaghetti onto three plates, then spoon over the roasted vegetables, followed by the garlic crumbs, then the toasted maple walnuts and pumpkin seeds, then crumble over the sage leaves, then finally sprinkle over the chives. Drizzle a little extra olive oil over it if you like, then serve. If the garlic crumbs have got too cold they can quickly be reheated in the pan before you tip them over.

Serves 3 although could maybe stretch to four, just up the quantities a little. 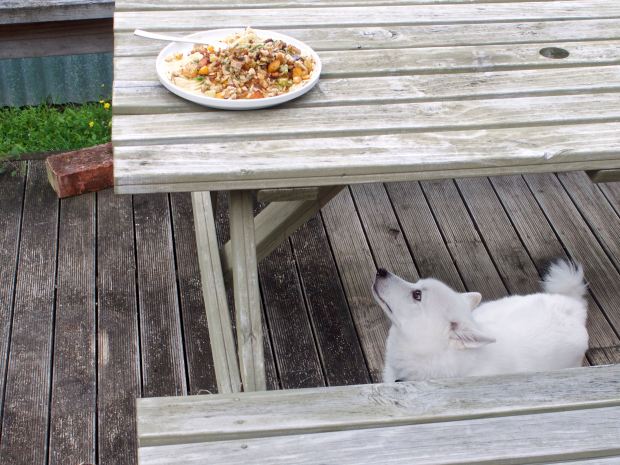 I’m back in Wellington for a couple of weeks which means I’m back staying with the eternally kind and generous Kate and Jason; I cooked this for us for dinner and then – having not taken any photos of it but being quite pleased with myself – made it again the next day for lunch just for me, and made some adjustments to improve it, and that’s the recipe that I’ve written up today. (“oh” – Kate and Jason reading this, probably. Sorry, Kate and Jason, that you got the first draft.) As with all my recipes I encourage you to work with what you have to hand. If you don’t have sage or chives, plenty of freshly chopped (not fried) parsley would be good, fresh thyme leaves also are delicious and evocative of autumn. You could try hazelnuts or almonds instead of walnuts, cauliflower instead of broccoli, and use penne or some other short pasta instead of spaghetti. If you’re using short pasta, you could also let it get to room temperature and serve it as a salad – in which case perhaps consider stirring through some rocket and slices of crisp pear. And honestly, if you’re not avoiding dairy for whatever reason, I freely and slightly gloomily concede that any iteration of this recipe would probably be amazing with some parmesan shaved over.

I’ve been out of work for about a month now and even though I’m still kind of buffeting about on the wind like a balloon, with no fixed abode and no real deadlines to tie myself to; I nevertheless feel like the amount of space in my brain available to being creative has grown tangibly and as a result so has the creative work that I’ve done. Every day that passes seems to make things ever more sharper-focussed which is honestly an amazing feeling. I spent a lot of last year with the low-level hum of panic in my ears about my lack of direction, now I have SO much direction and it’s such a relief. I don’t have any advice on how to make that direction appear any faster than it has, if I did, I wouldn’t have spent so much time panicking, but I suspect…panicking does not help? Do I advise you to stop panicking? I mean sure, and while you’re at it why not turn back the incoming tide by like, kicking it lightly.

title from: Park Song, by Laura Nyro. Her voice is so beautifully melancholic, it’s the sound of grey clouds making it dark at 4pm but not so dark that you can turn a light on so you just sit there in the semi-gloom getting increasingly existential.

30 Century Man, by the recently-late Scott Walker, it opens with those guitar chords that I can’t describe in a technical sense but where you just immediately know this song’s going to be sad but uplifting and feel like you’ve heard it before and like you’ve never heard it before all at the same time and like it should play over the one happy scene in an unhappy arthouse film where people stare out of windows a whole lot (for example, So Long Marianne by Leonard Cohen and Alone Again Or by Love also have these guitar chords, you know what I mean?)

Poe, by The Shirts. I like that it’s kind of punky and proggy at the same time, by which I guess I mean that it’s punky but goes for over five minutes. Notable for the presence of a young Annie Golden!

Zadok the Priest, by Handel. I’ll be honest with you, this is a good song and all but I’m really here for the first minute and fifty seconds of it which goes SO HARD, with the teetering anticipatory climb of its building chords which, when it finally drops, gives us the choir singing with this incredible anxious urgency of sound. After that it starts to sound more straightforwardly celebratory, all “rejoice, rejoice” but for that first stretch it’s brilliantly tense and exciting.

Next time: I will aim to cook Kate and Jason dinner that’s not a first draft.

PS: If you would like to support what I do and receive exclusive content (such as a review of every book and movie that I consumed in January or what star sign I believe each character from Gavin and Stacey is) then I encourage you to sign up to my Patreon.